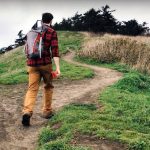 They are all quite different, these short, funny, wry, poetic, dramatic, and historic films. What they share is that they’re all love letters to a sprawling piece of mostly public land that makes up the unique Ebey’s Landing National Historical Reserve near Coupeville.

The enormous Whidbey Island territory includes shoreline and hills, farms, prairie, buildings ranging from farmhouses to lighthouses, trails, secluded spots, and even a hilltop cemetery that includes both pioneer graves and a 19th-century military facility or two.

In short, this rambling acreage is a beautiful place, photogenic as a little kid with a puppy, and a location that can be embraced by poets and artists to inspire the sort of craft and creativity found in the seven films shown at the second annual festival, dubbed the “Ebey’s Reserve Film Slam.” This year’s event is considered a “slam” by some due to restrictions that aren’t normally part of film festivals.

The films were created under strict time pressure and required certain elements that were revealed to the filmmakers at the very beginning of the 50-consecutive-hour creative marathon. Film teams went from rough ideas to writing, filming, editing, adding music, and everything else it would take to create a finished product in that remarkably short period of time. This year, seven films made it to the finish line on May 6 in the Coupeville High School Performing Arts Center.

“We wanted to make a film, but it didn’t seem fair that people who were part of Friends of Ebey’s could compete,” says Alix Roos, executive director of the Friends of Ebey’s Landing National Historical Reserve. Roos teamed with Friends board member Marilyn Sherman Clay to make the film, “Perspectives on Ebey’s … Relatively Speaking,” a happy, evocative visit with the Sherman family, which has farmed in the Reserve for years.

“The real gift of this event is that, as a community, we have the opportunity to look at the Reserve through the eyes of artists,” Roos continues. ” This place holds unlimited stories.  The outcome is a wonderful mix, inspiring laughter and tears – and some contemplation. These really are some amazing works of art.”

In the competition category, Tom Giffin and Piper Reve won the Judges Choice award with “EB’s Mama,” a tongue-in-sci-fi story, following up on last year’s “EB’s” tale, which had a young space alien crash-landing on the island. This time, Mama goes looking for her child.

In the People’s Choice competition, Catherine Roach and Andrew Ziehl won for their “For the Love of Ebey’s,” an affectionate and beautifully photographed tale of a day spent discovering the reserve, from its deeply shaded forests and sunny hillsides to manmade treasures such as the Admiralty Head Lighthouse and various buildings across the Reserve.

Other entries in the judged competition included, “Forced Recollection” by Coleby Fleming and Ben Olson, who tell the story of a young man searching for himself; and “Ebey’s Treasure,” a tale told movie-trailer style by the father-son team of Shawn Berit and his teenage son Cody (a.k.a. “The Dakota Guys). It’s an adventure of a good guy and a bad guy searching for the treasure of Ebey’s and finally discovering it’s been beneath their feet and within their vision all along.

The Friends of Ebey’s Landing National Historical Reserve (which sponsors the festival) works in cooperation with the Trust Board (which administers and manages the Reserve) and the National Park Service to fund projects and programs that protect, preserve, and enhance the cultural and natural resources, as well as the visitor experience, of Ebey’s Landing National Historical Reserve.

The Friends played a crucial role in the late ‘70s by protesting the development of Ebey’s prairie, which led to the creation of the national reserve by Congress in 1978. The goal was to “preserve and protect a rural community which provides an unbroken historical record from nineteenth century exploration and settlement in Puget Sound to the present time.”

The majority of Ebey’s 17,000-plus acres of land is privately owned. It is made up of privately owned land, the town of Coupeville, three Washington State parks, Island County, and the National Park Service.

In addition to the two military facilities (Fort Casey and Fort Ebey, both state parks), the lighthouse and the prairie, the town of Coupeville and Penn Cove (home to a major mussel farm), Ebey’s Reserve is home to historic buildings and houses.

One such place is the Ferry House, built by Winfield Scott Ebey in 1860 and opened as The Ebey Inn. The inn is one of the oldest residential buildings in Washington. It remained in Ebey family hands until 1917, when a grandson of patriarch Isaac Ebey sold it.

While the Ferry House was built by members of the Ebey family, it wasn’t Isaac’s home, which no longer stands. Isaac chose his homestead in 1850, building his home on low land, where it would be convenient to land a boat. That’s where the term “Ebey’s Landing” came from.