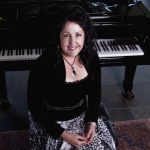 Maureen Girard and her 88 Keys Piano Club will present a concert in Zech Hall at Whidbey Island Center for the arts on January 24 at 7 p.m. that will feature performances by classical and jazz pianist Karin Kajita. Girard and some of the piano club students will perform as well.

The show is part of the house concert series that Girard has hosted for the past 10 years; this is first time it has been presented outside her studio in Langley. Since her arrival on Whidbey Island in 1987, she has been a tireless emissary for classical and jazz piano, educating not only her hundreds of students through the years, but the listening public as well by promoting concerts featuring many of the Northwest’s best pianists and others with national and international reputations. The upcoming concert’s format will highlight that educational aspect. Between pieces, performers will converse casually both with each other and audience members. The theme of the evening will be improvisation.

“The show will be similar to my house concerts except adding the conversation,” said Girard. However, there will also be other new aspects such as “performances on two pianos. [These innovations] will be similar to Marian McPartland’s NPR Piano Jazz show.”

Another advantage of presenting at Zech Hall is the possibility of offering wine and small plates of food to attendees. “I am so happy not be making cupcakes for everyone and not to have my husband, Johnny, out in the front yard with a flashlight helping everyone park their cars.”

Girard will open the show as host for the evening with a solo performance before Kajita joins her onstage. They will perform a few pieces together on two pianos, interspersing their playing with talk between each other and audience members who will be invited to participate.

“We will have some conversation about music and careers and invite the audience to ask questions,” Girard said. “We want the show to be entertaining, fun, inclusive and, of course, with great music.”

Maisami Saiku, one of Girard’s students, will open the second set and demonstrate her classical and improvisational skills. Kajita will then accompany Saiku for another round of double piano numbers. The rest of the set will feature Kajita performing some of her own compositions and other music of her choice as she continues to interact with the audience and invite questions.

“My house concerts [in my studio] were wonderful events that ran for 10 years with musician friends from all over the world. Now they will be bigger and better!” said Girard. “Karin is the first artist I’ve invited. She is absolutely the perfect first guest artist. I am so happy to have her spotlighted in this performance. She is a magnificent piano artist of great depth and a first call performer.”

Karin Kajita, the featured performer for the 88 Keys Piano Club Concert at Zech Hall on January 24 (photo courtesy of the artist)

An indefatigable and staunchly optimistic enthusiast for the genre, Girard continues her significant role in the island’s music community by developing local talent through her teaching, bringing in high level performers for local audiences to enjoy through her promotional activities, and by performing herself. This upcoming concert will serve to illustrate each of those aspects of her vocation.

The event is open to all ages, except for very young children. Tickets are $20 and can be obtained by calling 800-638-7631 or 360-221-8268, or by visiting the box office at 565 Camano Avenue in Langley between 1 and 6 p.m. Wednesday through Saturday—or two hours before any show. Visit www.wicaonline.org to purchase your tickets online. Online ticket sales are available until noon the day of the show.