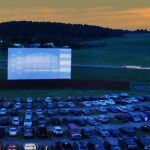 There are only 322 drive-in movie theaters left in the United States, and fortunately for Whidbey Island, one of them is south of Oak Harbor. The Blue Fox Drive-In opened in 1959 and, since the eighties, it has offered the latest movie releases, a video game arcade, go-karts, and good movie food, including pizza, nachos, hot dogs, candy, and popcorn.

At their peak in the ‘40s and ‘50s, there were 3,775 drive-in theaters in the U.S., but then the numbers started to decline. The Blue Fox Drive-In continues to thrive, thanks to community-minded owners Darrell and Lori Bratt, who maintain a family-friendly atmosphere and have diversified in a way that sustains them during the off-season.

The box office opens at 4 p.m. The lot fills up on weekends, so get there early to get the best parking. (Photo by Kate Poss)

“They bought it in ’88, and they’re the ones who put in the arcade, built the track, and made it more family-friendly,” says Kelsey Bratt, daughter-in-law of the Bratts. Kelsey helps with publicity and social media, along with the many other tasks that are required to run a movie theater and party venue seven days a week during the summer. “Back then, kids would come out and drink and get rowdy. The Bratts put a kibosh on that. They made it more family-oriented. We keep our prices low and offer lots to do. As far as rowdy partiers, we have signs posted ‘No alcohol or drugs.’ People realize that it’s for families.”

Elizabeth Saenz, a central Islander with three children, says she and her husband find the Blue Fox Drive-In a way to get out and have quality family time. “It’s the only way my family of five can afford to go see a new movie together,” Saenz says. “We have great family memories there. Love the curly fries and nachos!”

After you’ve found your parking spot, you can enjoy the go-karts and arcade, and play Frisbee or catch in front of the screen. (Photo courtesy of Blue Fox Drive-In)

During the longest days of summer, features start at dusk, and if it’s a triple feature, you might find yourself staying until 5 a.m. the next morning

“Right now, movies start at 9:40 p.m.,” Bratt says. “June 21 is the solstice and after that, we will start the movies earlier as the nights get longer. We’ll be running a couple triple features because of how the movies fall. We want the new releases and want to get the crowds.”

Waiting for the show to begin. During long summer days, double and triple features start at about 9:40 p.m. (photo by Kate Poss)

The Blue Fox Drive-In is fortunate to attract first-run films, which bring the crowds, Bratt explains. “We get first-run movies because we have such a good following. We’re up there with the averages (required by distributors). We can get 390-430 cars in a night, depending on how well we manage the lot when they are coming in.”

On a mid-May night, my friend and I drove in to see a double feature: “Guardians of the Galaxy 2” and “Beauty and the Beast,” two films that had been recently released. The lot was full. Most cars and trucks parked with their back end facing the screen on a raised berm. Families opened the hatchback and cuddled in sleeping bags while munching popcorn.

Inside the snack bar, we bought fresh buttery popcorn and were caught up in the friendliness and good energy of the employees. The pizza looked delicious, and those who ordered one received pizza-shaped pagers that buzzed when their pizza was ready.

“We make our own pizza dough and use a family recipe for the sauce,” Bratt says. “We grate two different types of cheese, cut our own veggies.”

Outside the snack bar, apparel with the Blue-Fox logo is for sale. The Bratt family runs a print shop on the premises that does screen printing, banners, and embroidered logos for the community. “The print business keeps us alive during the winter,” Bratt says, adding that the drive-in is open Friday through Sunday from fall to mid-June.

To find out what’s playing now, visit the Blue Fox Drive-In website. Bring blankets and pillows, open the hatch, enjoy a double feature, and expect to head home past midnight.

Kate Poss worked as a library assistant at the Langley and Coupeville Libraries before retiring last year. She worked for three summers as a chef aboard a small Alaskan tour boat from 2008 to 2010. She was a newspaper reporter in Los Angeles for many years before moving to Whidbey Island, where she likes cooking for new and old friends, hiking, reading great fiction, and writing her second novel with her friend Fred Bixby.