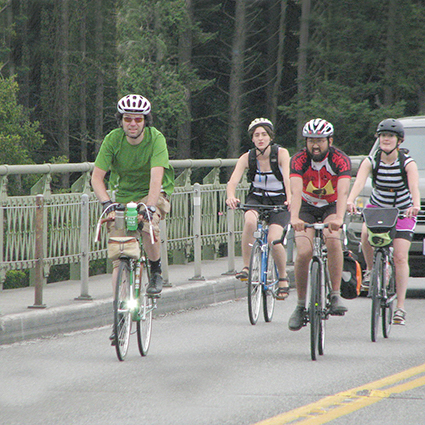 A Bicycle Pilgrimage Departs for the Athabasca Tar Sands

Some dreams happen spontaneously. Others require years of diligence.

Somewhere in between lies the dream of four young people to bicycle more than 1,000 miles between Whidbey Island and Ft. McMurray, Alberta, along the Trans-Mountain pipeline. Owned by Kinder Morgan and constructed in 1953, it is the only pipeline system in North America that transports both crude oil and refined products to the west coast.

The quartet will pedal from one of the pipeline’s terminals—the Tesoro refinery near Anacortes—on Aug. 15 and arrive on Sept. 8 at Ft. McMurray, Alberta, the nearest community to the open-pit tar sands mines, which are the pipeline’s source of oil.

Tar sands are not like crude oil, obtained from conventional drilling; they are mined by scraping away the top layer of trees and soil in the fragile boreal forest. Then gargantuan shovels scoop the sticky mix of sand, water and bitumen into trucks. An onsite processing facility separates the sand, clay and tar bitumen.

The tar is too heavy to pump in a pipeline so it’s mixed with hot water, heavy chemicals, natural gas and light crude oil—a toxic, corrosive mixture—that is pumped to ports like Anacortes.

Following the pipeline, the dedicated cyclists will spend 14 actual days of biking from 55 -102 miles/day with daunting elevation gains and very few days of rest. This journey isn’t for the weak of body. Their destination aims them at one of the ugliest open-pit mining sites in North America, a journey not for the weak of spirit. They ride to bear witness and to call others to attention.

One of the pedaling four, Erika Lundahl, the youngest rider at 23, and the one handling most of the media outreach, said “It’s hard to relate to climate change, and biking every mile is a good way to ‘know the reach’ of the problem. It’s a time in my life with the least day-to-day responsibility and a good time to bring my body to the cause.”

The three Whidbey riders, Phil Jones, 34, Derek Hoshiko, 37, and Kyle Rapp, 36, regularly commute by bicycle to their places of work. Rapp’s focus on the ride is to support his friend, Phil Jones, and to be immersed in the well-being that comes from a long bike ride. Jones and Hoshiko are passionate about “doing something” to raise awareness about the “wide reach” of the tar sands—from potential pipeline spills to the devastation of First Nation’s lands to the larger issue of global climate change.

Idealistic, determined, creative, athletic, and resourceful would be good descriptors for each of the riders. They have organized a Kickstarter campaign: https://www.kickstarter.com/projects/tarsandsride/the-road-to-athabasca to help with some of the funds they need for food, camping, biodiesel for their “sag” wagon, and support for filmmaker, Phil Walker, who will document the journey. Aug. 12 is the deadline for contributing to their Kickstarter campaign.

First Leg of the Journey—Whidbey Island

The teamwork of this group was obvious as they prepared for the “trial run/first leg” of their journey on July 11. Leaving from Hoshiko’s and Jones’ side-by-side homes in Maxwelton Valley, the crew was a whirlwind of activity.

The cyclists on the Greenbank hill on the first leg of their ride to the Tar Sands Mines north of Edmonton, Alberta   (photo by Ann Linnea)

Jones, the “logistic’s coordinator” who has organized every camping spot and made connections with many local folks along the way, including First Nations people, adjusted bike after bike and derailleur after derailleur for the 68-mile training journey.

The bikers are not using high tech, elite bikes. Hoshiko explained they chose slightly heavier bikes and tires to provide greater comfort on the road and fewer flat tires. Jones rescued his bike, a Peugot 208 constructed in 1972, from Island Recycling. “The only original part left is the plastic front derailleur” he said, “and I’ll replace that before the trip.” Rapp described his 2004 Kona as a mountain and road bike “squished together.”

Phil Jones leading the Tar Sands riders along Madronna Way north of Coupeville on the first leg of their 1,000 mile ride (photo by Ann Linnea)

They are storytellers, activists, and artists and they’re taking this journey to educate people about the tar sands and global climate change. This story will include elevating the voices of those most impacted by the oil industry’s development—First Nation’s people in western Canada.

Independent filmmaker Phil Walker was drawn to the project by the caliber of the people and the magnitude of the issue. “Documenting these committed and passionate activists on an epic journey of discovery and protest will yield a compelling story of great value,” he said. Walker (http://jumpcutpro.com/About_JumpCut.html) will accompany the crew in a van loaned by the Backbone Campaign.

Turning off 525 and heading towards Coupleville/Pt. Townsend Ferry (photo by Ann Linnea)

“The fossil fuel industry,” said Hoshiko “wants to expand and use the Pacific Northwest as a corridor for pipelines and rail transport for tar sands, Wyoming Powder River coal and North Dakota Bakken oil field products.” “Most of these products will be shipped to China,” he added.

“Oregon, Washington and British Columbia are the ‘Thin Green Line’ of defense against a future of accelerating global climate change because of continued fossil fuel use,” said Hoshiko, who is a professional environmentalist working for Climate Solutions in Seattle. (http://climatesolutions.org).

He reiterated that the team is calling this a pilgrimage. “The idea of a pilgrimage is to step away from the western mindset of predetermining outcomes. We are using organizing tools, like a website and a Kickstarter campaign, but we hold them lightly so that emergent outcomes can occur. It is important to us to keep that mystery alive.”

All four are determined to create something that has not been created before. Visit their website: http://www.TarSandsRide.org to learn more and have the opportunity to participate in an important endeavor.

Ann Linnea is a frequent contributor to Whidbey Life Magazine. Author of numerous environmental books, including “Keepers of the Trees” (http://peerspirit.com/product/keepers-of-the-trees-a-guide-to-re-greening-north-america-by-ann-linnea/) and articles, she is dedicated to writing about the local/personal angle of environmental issues.