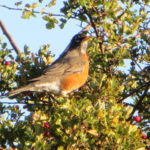 ‘A Bird in the Hand’ Gathering to be held this Sunday, Sept. 18

Celebrate Whidbey’s winged nation from noon to 3 p.m. this Sunday, Sept. 18, at Whidbey Audubon’s “A Bird in the Hand” event at Bayview Farm and Garden.

Featuring specimens of the island’s birds, this unique avian library provides hands-on education to a public that typically sees them from a distance or in motion.

Watercolorist and avid birder Frances Wood hosted a past “Bird in the Hand” event. (photo by Julie Dougherty Winger)

This popular event has inspired visitors to appreciate our feathered brothers and sisters.

“The doors open and the magic of curiosity fills the room,” said Judy Feldman, a past visitor to Bird in the Hand. “It’s so wonderful to watch people be awestruck by the complex beauty of the wings and feathers and feet. It’s especially exciting to watch faces of small children as they get closer to birds than they’ve ever been.”

While there are more than 450 Audubon chapters nationwide that promote bird watching and preservation, our island Audubon branch has a rare collection of preserved birds that the public can hold and view close up.

Bird skulls of vireos and warblers are part of the collection. (photo by Kate Poss)

A gift to the Whidbey Audubon Society, these birds were once collected to identify the remains of birds that had collided with Navy planes, also known as Bird Aircraft Strike Hazards or BASH.

Matt Klope, an Oak Harbor biologist and taxidermist, worked for years as a coordinator with the Navy on preventing bird strikes. He started a collection around 30 years ago and used it to identify birds that routinely flew into planes. Once identified, Klope explained, the Navy could discourage those populations’ attraction to naval airspace.

“I’ve been working on birds since high school,” he said. “It’s a lifelong thing. The Navy needed someone to coordinate the bird strike program. When you strike a bird it is important to know what kind of a bird it was. We used forensic science developed by the Smithsonian to help us. They do feather comparisons, which are much cheaper than DNA analysis. They have close to 800,000 species from all over the world.”

Whidbey Audubon’s bird collection curators cut custom-shapes in foam to cushion bird specimens. Each bird is labeled and then stored in a box that is catalogued into a library system.  (photo by Kate Poss)

When Klope retired from the Navy, he donated the collection to the local Audubon chapter. He continues to preserve birds that have met their demise and educates Audubon volunteers on his specialized techniques. Look for Klope at the Bird in Hand event to learn more about his skills.

Some of Klope’s animals are posed so naturally that one immediately feels Klope’s respect for them in their preserved form. It’s fascinating, for instance, to see the work he’s done preserving owls.

Owls, unfortunately, are routinely hit by cars,” said Robin Llewellyn, librarian for the Whidbey Audubon bird collection and co-chair of A Bird in the Hand this year.

A saw-whet owl, preserved and used in education programs: the owl lives in island woods and is only six to seven inches tall.   (photo by Kate Poss)

“We get lots of owls; when they see prey, they look at it with total focus and don’t pay attention to cars,” Llewellyn said. Look for at least two owls on display at Sunday’s A Bird in Hand: a tiny saw-whet owl and a barred owl. Their feathers are remarkably soft. Llewellyn said that owl feathers are designed to promote quiet flight and stealth to aid owls catching their prey.

The Audubon chapter continues to accept certain birds for its collection.

“If you find a dead bird in good condition, call to see if we need it,” said Llewellyn, providing her number, 360-678-5403. “Wrap it in a newspaper and put it in a re-sealable plastic bag and squeeze the air out. Include your name, contact information, locality and date it was found and put it in the freezer.”

On a recent afternoon Llewellyn visited Klope’s Oak Harbor taxidermy studio with two birds she pulled from a cooler packed with ice. One was a sharp-shinned hawk, a small raptor that hunts other birds. Klope thought it might have been in the freezer too long and wasn’t sure he could restore it to its former glory, but, unfazed at his reticence, Llewellyn suggested he use the wings and tail for a future display. She also showed him a crow which she had recently picked up, mentioning that it can be added to the corvid collection.

Matt Klope’s talent with preserving birds, such as this barred owl, are considered museum quality by the Whidbey Audubon Society.   (photo by Kate Poss)

The Audubon Society was created in the late 1800s originally to protect water fowl such as herons and egrets that were hunted to near extinction for feathers on popular ladies’ hats. One might imagine that wildlife artist John James Audubon created the society that bears his name, but it was one of his wife’s students who did the honors: George Bird Grinnell, one of three founders of the early Audubon Society in the late 1800s. Knowing Audubon’s passion for depicting the natural world, Grinnell chose Audubon as the name for the enduring preservation society, whose symbol is a great egret. Nowadays one of Audubon’s primary missions is to protect avian populations threatened by climate change and habitat loss.

The Whidbey Audubon Society’s collection, containing more than 500 birds, has been catalogued and permitted and is used in elementary schools and outdoor classrooms for education. A Bird in the Hand was created in 2008 and has been held biennially ever since, becoming more popular through the years. This Sunday’s event, held in the Bayview Farm and Garden’s Greenhouse, will host live raptors for the public to meet as well. Visitors can learn about and buy landscape materials that attract birds, as well. For information on everything about birds, look for Steve Ellis, the Whidbey Audubon’s “answer man,” who has been answering questions about birds for decades.

Image at top: American robins fiercely defend their nests, often ganging up to drive predators away.  (photo by Jamie Whitaker)