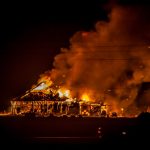 You reap what you sow. Fourth generation farmer Georgie Smith has put her heart and soul into Willowood Farm for more than two decades, growing food for Whidbey Island and Seattle. Smith is a woman of true grit and contagious perseverance who has received a great deal of support since the farm’s iconic barn burned to the ground on March 6. She has spent decades planting the seeds of the support she is now reaping.

Before: The Smith barn on Willowood Farm (Photo courtesy of Georgie Smith)

Willowood Farm has been in the Smith family since the late 1800s. In the early 1970s, with the loss of two family members in one year and a double inheritance tax bill, the Smith farm was in jeopardy of being developed. Through the work of the family, neighboring farms, and concerned citizens, a novel idea took shape to save the Smith farm and the surrounding central Whidbey agricultural community from the pressures of development. In 1978, the Smith farm, long considered the “heart of Ebey’s Prairie” and the surrounding 17,000 acres were made the Ebey’s Landing National Historical Reserve by the National Park Service. This created a new sort of park that was focused on preserving a working, agricultural community with a visual, cultural continuity to the past. Georgie Smith, who was just seven at the time, would grow up to re-establish her family’s farming practice on their remaining 20 acres of land, smack in the middle of the scenic Ebey’s Prairie, establishing a thriving, sustainably grown vegetable farm called “Willowood.” This was the original name bestowed on the first farmstead established there by Eason Ebey (Isaac Ebey’s son) in the mid-1800s and before the Smith family arrived.

The historic Smith barn, which was built around 1880, was a community landmark that held a great deal of history and family memories. The fire destroyed it and endangered the livelihood of the family. “The barn was the hub, the nexus, of all farming operations,” says Smith. It housed most of the farm’s equipment, including all their 2017 seeds, several thousand pounds of dry beans, all seven of their laboriously acquired and maintained tractors, and countless other supplies. Smith wasn’t sure in the first few days after the fire if she’d ever farm again.

During: The Smith barn caught fire on March 6. (Photo by David Stern – WhidbeyCustomPhotography.com)

However, in true and determined Smith form, the farmers were back in the fields just three days after the fire. Still figuring out the farm’s future, she and her farm crew of three realized that they had vegetables in the fields that needed to be harvested. When she learned that people wanted to help, Smith put a call to the community and dozens of volunteers came out. Kettles Edge Farm and Rosehip Farm and Garden lent equipment and farm crews while Sherman Farm lent space to pack and store produce. With this help, the farm has harvested hundreds of pounds of produce since the fire.

The week after the Smith barn burned, chefs had Willowood produce back in their coolers and on menus. Chef Vincent Nattress of Orchard Kitchen felt the loss from the fire and immediately reached out to fellow restaurant owners on Whidbey Island. “I think I feel like most chefs; seeing that barn burn caused a visceral reaction. This is the livelihood and home of a person who feeds us all,” Nattress says, adding, “If you know her at all, you know she personally embodies a critical hub for this island’s food. She’s like the mother of all farmers here.”

Nattress hosted a meeting at Orchard Kitchen that was attended by many of the island’s local chefs and business owners to plan a number of upcoming fundraisers to benefit the Smith Family. Various charity efforts have already taken place in Seattle and on Whidbey Island. Chefs are planning dinners and reaching out to guests for donations or are contributing proceeds from the sales of menu items that are dedicated to the farm.

Local coffee shops donated drink vouchers to volunteers at the farm, a Girl Scout troop donated cookie sale proceeds, people signed up for a Meal Train to provide food for the Smith family, and the list of community support goes on and on.

Within days after the fire, people donated more than $50,000 to help rebuild the barn through a GoFundMe campaign started by friend Kristen Stavros. On GoFundMe, Stavros wrote, “This beautiful, historic beast dominated the landscape of Ebey’s Prairie and was also host to many a local fundraiser. As much as this barn means to the island, it is the family that actively works the land around it that means even more.”

Stravos says she started the campaign because she wanted Smith to get up the next morning and be able to get through this, adding “One accident like this should not put a fourth-generation farm out of business.” Another $13,000 has been donated via a “Smith Family Farm” benefit account set up at the local Coupeville People’s Bank.

The Smiths have been a vital part of shaping Ebey’s Landing National Historic Reserve, and since Georgie Smith started farming the family land, she has continued to build community through Willowood. Fellow farmer Wilbur Purdue says he believes the community wants to be involved because, “She has such an amazing operation in such a special place and always is willing to provide her facility and expertise. I think people know the real deal when they see it, and they admire that in a person.” Smith is already thinking of ways to give back, saying, “I can tell you we are determined to do something great to honor all this support and to pay it forward to our amazing, giving community.”

Writer Lis David and photographer David Stern donated their time to write and illustrate this article to help raise funds for Willowood Farm.

Lis David is writing, eating, and drinking her way from one end of Whidbey Island to the other. She developed her passion for writing about food and beverage by working in restaurants and on farms in Washington, D.C., Chicago, Spain, and Ireland.

David Stern is a Coupeville-based photographer and co-owner of Whidbey Custom Photography with his wife Madisun Elizabeth. David was mentored by his grandfather, a world-famous landscape photographer based in New England. David hopes to work as a photojournalist one day, traveling the world and telling stories.