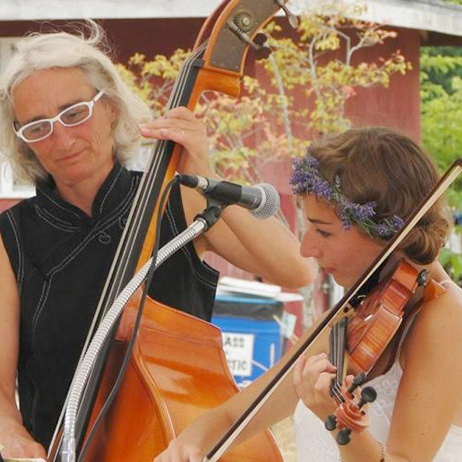 Eastern European folk tunes, country folk, folk rock, singer-songwriter, Klezmer and classical styles with an occasional jig or reel were all ably, at times masterfully, represented. A modestly ample crowd sat and listened intently in the outdoor setting. One of the staff people who works with event host South Whidbey Tilth said, “It was almost biblical. People were so quiet. I went in the kitchen and they were whispering in there.”

Whidbey Life photographer David Welton dropped by for part of the afternoon and took some pictures. Welton’s photos capture the color and spirit of the community gathering. Emory Lindgard was taking photos at the same time and gave us permission to use some of his fine shots, as well.

Along with Gloria Ferry-Brennan and Toni Talia Marcus, pictured in the photo essay, other headliners were Debbie Zick and Kimmer Morris of the Morris Zick Duo, the Joann Quintana band, Siri Bardarson and Beverly Graham. Stiltman Larry Dobson showed up to entertain the crowd, as did young Molly Quade, a mime and unicyclist.

Sub-titled “Eve’s Turn” as a nod to the all-female line-up, SWAM 2015 was the sixth edition of the event with its emphasis on promoting the musicians and the community on the south end of Whidbey. (Full disclosure: Russell Clepper, author of this article, is also the festival promoter for SWAM.)

Talia Marcus leads a procession of Island Strings music students of all ages to the SWAM stage. Linda Good, in the white hat, founded Island Strings in 1974 with Paula Pugh and Linda Morris. Marcus is an associate teacher for the organization, which has hundreds of alumni, including SWAM 2015 headline performers Kimmer Morris and Gloria Ferry-Brennan. (photo by David Welton)

A young Island Strings musician takes a moment before performing to give and take a little love from puppy Rio. (photo by David Welton)

Gloria Ferry-Brennan kept the crowd silently enthralled with her exquisite renditions of a number of pieces by Bach. Ferry-Brennan is a Jack Kent Cooke Foundation Scholar, one of 94 this year out of more than 1,800 qualified applicants, according to a press release put out by the foundation. Accepted by both Juilliard and the Curtis Music Institute, she chose the latter and will begin college studies there this fall. (photo by Emory Lindgard)

Talia Marcus fiddles as stilt-walker Larry Dobson dances with his head in the welcome clouds. (photo by David Welton)

One of the day’s highlights: on the morning of the festival, Ferry-Brennan convinced her mother, Anne Ferry, to perform. It took a little old fashioned arm-twisting, but Ferry bravely stepped up and accompanied her daughter on several fiddle tunes. It was Ferry’s first time to play her bass in 10 years, according to Ferry-Brennan. (photo by Emory Lindgard)

Leave a Reply to Prescott