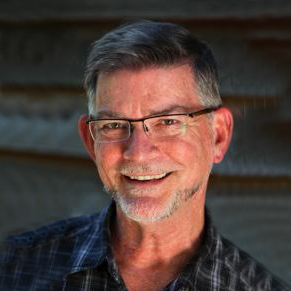 Charlie Murphy has always been a progressive firebrand. When he was performing as a singer/songwriter in the 70s, audiences would often have to cross lines of demonstrators to get to his concerts. His song, “Gay Spirit,” became an anthem for the Gay Rights movement.

“My history is really steeped in the gay movement and the feminist movement,” Murphy said.

Murphy during his “performing” days (photo by Jami Sieber)

He remembers playing in front of 300,000 people at one of the first San Francisco Gay Pride Parades. Recordings of his songs are documented in the Smithsonian Folkways archives, in the album “Walls to Roses: Songs of Changing Men.”

Murphy was living in Seattle in the 80s when he decided to rent a cabin on the south end of Whidbey Island so he could focus on his songwriting. He liked the island so much that, in 1999 when he co-founded the organization, Power of Hope, with Peggy Taylor, he bought a house in Langley.

“I fell in love with the community here,” Murphy remembered.

Soon after, he met the love of his life. Murphy received an email from Eric Mulholland, a former student of a friend who had taught in California-Irvine’s theatre department. Mulholland had just moved to the area and was looking to make new connections.

“I remember calling Peggy and asking her: ‘How much time do I have to spend with this person to be polite?’”

But when Mulholland walked through his door, Murphy said he was stunned. “I took one look at him and thought to myself, ‘I could spend the rest of my life with him,’” he recalled, grinning.

Lunch turned into a dinner at the Whidbey Institute and, one week later, Mulholland proposed that the pair start dating.

“He proposed relationship,” Murphy said, “so I knew it was up to me to propose marriage.”

Four years after they started dating, the couple was traveling in Portugal. Murphy was going to propose on the first night, but was too nervous. For the next two weeks, he tried to build up the courage to pop the question. After Murphy knocked a jar of olives onto a tile floor, Mulholland finally asked him why he was acting so strangely.

Murphy took him to the top of a hill near a windmill and proposed. Mulholland promptly accepted.

People embrace love! A spontaneous kiss, captured at one of the P.Y.E. gatherings (photo by Peggy Taylor)

Although the couple married in 2006, Murphy insists that deep connection was there from the start: “I always felt married to him since I met him.”

The day after they were married, the couple traveled to Uganda for a “Honeymoon of Service,” working with youth who had HIV. Murphy and Mulholland have continued their international facilitation work with youth with the organization PYE Global: Partners for Youth Empowerment.

“Charlie is our local bodhisattva meets Apollo. When I first moved to Whidbey Island, I heard people speak Charlie’s name with incredible joy and reverence,” Stinson said. “Those who have met Charlie know that he is a true visionary. His work in youth empowerment and facilitation has changed so many lives, both here on Whidbey and around the world. I’m delighted to join our community in honoring Charlie as this year’s Queer Pride Parade Grand Marshal.”

Recently, Murphy was diagnosed with Amyotrophic Lateral Sclerosis, a progressive neurodegenerative disease known more commonly as ALS. The day after the Queer Pride Parade, Murphy and Mulholland are flying to China for at least three months to work with a hospital that offers hopefulness in managing ALS. Murphy will receive daily massages, acupuncture and herb adjustments.

“We’re embarking on the greatest adventure of our lives,” Murphy mused.

No matter where the couple travels, they will always consider Whidbey home.

“What keeps us here is the depth and vibrancy of the community,” Murphy said. “We have a pocket of wonderfulness here.”

A few of the marchers (yes, shamelessly, we used a photo of ourselves…) at the first parade (photo by David Welton)

The second annual Queer Pride Parade is at 2 p.m. on Sunday, Aug. 2 in downtown Langley. For more information about the parade and the conference from 6 to 9 p.m. on Saturday, Aug.1, featuring Sharon Shoemaker’s documentary on LGBTQ youth, go to http://www.queerparade.com.

For more information about the Charlie Murphy Healing Fund and how you can contribute, please visit: http://www.youcaring.com/charlie-murphy-361893.