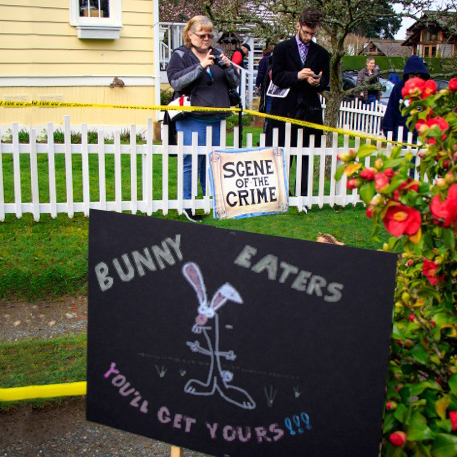 Langley’s 32nd annual Mystery Weekend on Feb. 27 and 28 set an attendance record when amateur sleuths from all over descended on the Village by the Sea to help solve its yearly February crime.

This year’s hapless victim was Sir Laurence Burton, a famed Shakespearean actor and consultant to the Island Shakespeare Festival. On the morning of Feb. 26, he was found stabbed to death in Melson Alley off First Street. The motives could have been jealousy, revenge or simply a disagreement with Burton’s plan to open Hare Haven, a refuge for Langley’s burgeoning bunny population.

Ophelia Burton, grieving widow of the murder victim, suspiciously looks too happy as she is interviewed by amateur detectives.

The plot centered on Langley’s bunnies and those who have differing opinions about what to do with them. Suspects included an eco-activist group that wanted to let the bunnies roam free, a vociferous mayoral candidate who wanted to deport them, a gang of hunters who wanted to trap and sell them, either to Sir Laurence Burton for Hare Haven or to the Hasenpfeffer Incorporated restaurant chain. Throw in a troupe of Shakespearean actors and their patrons and you’ve got a muddle of motives for murder.

On Saturday, the “Let the Bunnies Roam Free” group led a rally along Anthes Avenue.

Over 1200 people purchased clue maps and fanned out all over town to interview suspects, pick up clues and try to solve the murder for a chance to win prizes donated by Langley merchants. At the reveal on Sunday afternoon, detective I. B. Fuzz fingered the murderer as Joe Curr, who was owed money by his victim. He was promptly “arrested” by Langley Police.

This trio of amateur sleuths is also part of the Red Hat Society. Many visiting sleuths wear costumes of their own to add to the mayhem of Mystery Weekend.

Serious detectives take notes as the Coroner’s report is read at Langley Park on Saturday afternoon.

Detectives emulate Hercule Poirot’s magnificent mustache as they confront the 49ers, who want to trap Langley’s bunnies and sell them.

Wilie Bunie can’t believe anyone would think he’s a murderer. But he did change his allegiance from bunny protector to bunny trapper, so anything is possible.

Joe Curr is arrested by Langley Police after detective I.B. Fuzz identifies him as the murderer of Sir Laurence Burton. (He was later seen uncuffed and eating spaghetti at the Knights of Columbus Spaghetti Dinner.)   |   Photo by Betty Freeman

Image at top: Visiting sleuths try to pick up clues at the “Scene of the Crime” on Melson Alley off First Street. The protest group “Let the Bunnies Roam Free” also left their calling card.

Betty Freeman works for the Langley Chamber of Commerce, which sponsors the annual Mystery Weekend.