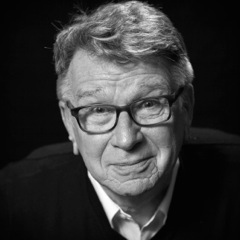 A Life in the Theatre: Andrew Grenier

Andrew Grenier never thought he’d be directing and acting in a play written by a promising student he taught over thirty years ago. But that’s just what he’s doing in Whidbey Island Center for the Arts’ upcoming production of “Other Desert Cities.”

His voice exudes an infectious warmth and wisdom that comes from years of teaching in classrooms. His mellow baritone makes it easy to believe that he spent some of his early twenties in a radio booth.

Born in Hanover, Pennsylvania, Grenier’s earliest performance memory comes from junior high school, where he played a cat in the operetta “The White Gypsy.” He was supposed to stand on his head and say his lines backwards. Unable to execute that acrobatic maneuver, he delivered his lines standing upright, head hung between his legs.

In high school, Grenier was cast in the role of Moondoggie in “Gidget.” Overcome by stage fright and terrified by the prospect of performing in a bathing suit in front of an audience, he bowed out of the production two weeks before opening night. Encouraged by a teacher, he returned to theatre as an associate director later in his high school career.

Grenier studied history and political science in college and taught these subjects before moving to New York in his mid-twenties. As an aspiring actor, he sometimes wandered through the furniture department at Bloomingdales to decide what pieces he would buy once he was a star.

After a stint as Gower the dog (costumed in a rubber dog suit) for Hanna-Barbera, he met his wife-to-be in an acting class. A month later, he traveled to California as a newlywed. His first job in California was selling records across the street from The Whisky on Sunset Boulevard. It didn’t take long for him to find a position in educational theatre at a local middle school.

“Teaching, exploring,” Grenier reflected, “that’s what appeals the most to me and why I love directing.”

At Beverly Hills High School, Grenier taught David Schwimmer, Nicholas Cage, Gina Gershon and other now familiar faces. Among his students was Jon Robin Baitz, whom he referred to as “Robbie.” Baitz went on to become a prolific, award-winning playwright and screenwriter, eventually penning “Other Desert Cities.” Grenier remembers reading a review of one of Baitz’s plays in The New York Times: “If Noel Coward and Arthur Miller were to have a baby, it would be Jon Robin Baitz.”

When Grenier wrote Baitz a congratulatory note to celebrate the opening of his play, “Substance of Fire,” Baitz replied with a short note signed “Robbie.” The two met in New York in the spring of 2014 to catch up, 35 years after their shared experience at Beverly Hills High School.

Grenier credits Richard Schechner, Jerry Gratowski and primarily Uta Haugen as the acting philosophies that have influenced him the most as a theatre artist. He observed Haugen teach and was compelled by the no-nonsense framework in which she worked. He recalls a particularly memorable class where a student urinated into an upstage trash basket. Haugen whispered to her teaching assistant and shortly after, two policemen escorted the student out of the acting studio. After reigniting her cigarette, Haugen looked at the rest of the class and calmly asked “Next?”

Grenier moved to Whidbey Island in 2010 and quickly formed an artistic relationship with Whidbey Island Center for the Arts (WICA). His directorial debut was “God of Carnage” followed by “Doubt” and “The Norman Conquests.”

In casting his productions, Grenier is attracted to the dedication of actors: “I look for that personal discipline, personal courage and an openness.”

“Andy’s greatest goal is to create an environment that allows each audience member to experience her/his own play,” said Mayer. “He’s passionate about finding the simple truths with which we all can identify, grounding ourselves in the specifics of character and allowing the conversation to create powerful relationships to person, place and time. The process drives him even more than the result, allowing us to collaborate and continue growing throughout the entire run of the play.”

Grenier has directed the production with the assistance of Associate Director Lucy Pearce. This marks the first time he has worked with an associate director. Pearce’s artistic support has helped to realize the vision of the play, as Grenier also performs the part of Lyman Wyeth.

“Working with Andy is like receiving a masterclass in generosity,” Pearce said. “He effortlessly balances confident leadership with encouragement of each individual’s creative input. He inspires each actor and crew member to expand into the best that they can be.”

Grenier has warmly embraced Whidbey Island in the third act of his life.

“I really enjoy learning to live on Whidbey,” Grenier reflected, “I’m learning how to be my age.”

Outside of theatre, Grenier enjoys practicing the art of photography. His images often feature his dog, Bokie, and his travels back to New York. Grenier has also officiated two weddings and will also officiate the wedding of former South Whidbey Commons AmeriCorps volunteer Tracie Fowler.

He extends an invitation to the Whidbey community to come and see Other Desert Cities: “I’m hoping that people emerge from the play energized in discussion, really looking at what we do and what we hold up as our identity.”

Get tickets and find out more about “Other Desert Cities” here.

Katie Woodzick works at Hedgebrook as an External Relations Manager. She is also an actor and director who can be seen on local stages. Learn more at katiewoodzick.squarespace.com.