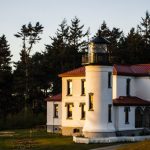 A Lighthouse That Shines Beyond Whidbey

The light cut through the darkness; a bright saber warning of danger from 120 feet above the water line. For ships navigating the waters of the Admiralty Inlet, the light was a guide to safety. Like its fellow beacons around Puget Sound, the Admiralty Head Lighthouse had one purpose: saving lives.

The statuesque, white structure went into service in 1903. Overlooking the gun batteries of Fort Casey, its Spanish-style architecture and 30-foot-tall tower are the stuff of beautiful postcards. Although its light no longer shines out over the Salish Sea, its walls still emanate protection.

The Admiralty Head lighthouse at sunset. (Photo by Shawn Berit)

Like the lighthouse, Don Meehan has spent most of his career providing guidance and protection. In his 26 years as the director of the Washington State University Extension for Island County, he helped many individuals and also helped create the groups now called Sound Water Stewards and Waste Wise. Though he has since retired, his involvement continues.

Sound Water Stewards, once known as WSU Beach Watchers, continue to work for the benefit of the Puget Sound ecosystem through scientific data collection, public education about our beaches and waterways, and physical maintenance of trails and beaches. The scientific research “citizen scientists” conduct is unique. “No other counties have collected this quality and abundance of data,” says Meehan. The information helps monitor the health of Island County’s beaches.

WSU Waste Wise of Island County is an educational program that teaches the public about proper garbage disposal, ways to maintain clean drinking water on the island, and recycling practices.

Both these groups have recruited hundreds of volunteers over the years. As a result of their success, they also developed the need for more dedicated office space for administration. In the early 1990’s the solution to that problem came in the form of the Admiralty Head Lighthouse.

The lighthouse, which was vacant, was also in need of care and preservation. Washington State Parks agreed to provide office space for both groups and open the lighthouse to the public again. Meehan worked with volunteers to create the nonprofit Lighthouse Environmental Programs to provide support for the existing environmental programs and the new Admiralty Head docents program.

With everything in place, one common item was found to be in short supply: funding. Yet, the lighthouse shone its light on a solution. Having seen the success of a fundraising license plate in Montana for Glacier National Park, Gloria Wahlin, WSU Extension docent program coordinator, suggested a plate of their own.

After a lot of work and a lot of help from many people, the state legislature made lighthouse vehicle plates a reality. One added feature that helped to promote the idea of the plate was to expand its benefit beyond the islands. To that end, proceeds from plate sales also benefit 11 other lighthouse preservation nonprofits in Washington State.

In the 10 years since it was released, the license plate has brought in approximately one million dollars. The plates are on more than 3,200 vehicles across Washington state and more than 500 of those are in Island County alone. That amazing flow of money has allowed Lighthouse Environmental Programs to be in the unique position of awarding grant money to other lighthouses, rather than just seeking it.

Meehan says that about a quarter of the money raised by the plates goes to the other lighthouses, mostly for preservation projects. “New Dungeness is getting a new roof this year,” he says. The lantern housing at Admiralty Head was also one of the beneficiaries. It now has a very accurate recreation of the original housing.

Preserving the Admiralty Head Lighthouse, along with our natural island ecology, has benefitted the whole community. The lighthouse has become “part of the economic structure of Whidbey Island,” Meehan says. Approximately 50,000 people visit there each year, many coming to Whidbey just for the lighthouse. They also spend their money in the communities of the island. The Lighthouse Environment Programs have become an “educational goal with an economic benefit,” says Meehan.

More than one hundred years ago, a lighthouse was built to help save lives and support shipping commerce in Puget Sound. Today, though in a very different way, it still helps save lives and supports commerce. From within its walls, our wildlife and environment are preserved, while its outward beauty draws visitors from around the world. Though its Fresnel lens no longer lights, the Admiralty Head Lighthouse is still a shining beacon for Whidbey Island.