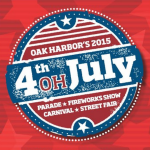 A Look at History as Oak Harbor Celebrates 100 years!

This year marks the one hundredth anniversary of the incorporation of Oak Harbor, which will be celebrated with a fireworks extravaganza on Saturday, the Fourth of July .

We were curious about what 100 years looked like, so we contacted the Island County Historical Society. They searched their archives to find some images for us from that era that we could share with our viewers and readers.

Independence Day, 100 years or so back,  looked quite different than it does today.

The Fourth of July celebration in Oak Harbor, 1915.

The area of Oak Harbor was originally called Kla-tole-tsche by the Skagit peoples in their Salish language. American and Irish homesteaders first settled around the 1850s and renamed the town Oak Harbor for the native Garry Oaks.

These new settlers quickly turned the area into an agricultural market town, transporting products by boat throughout Puget Sound. Chinese laborers and Dutch settlers arrived in the 1880s and 1890s and businesses, churches and schools soon followed. In 1915, when the population of Oak Harbor reached the grand total of 401, the city was incorporated and Jerome Ely was installed as the mayor.

In the past hundred years, Oak Harbor has achieved many significant milestones, including the construction of the Deception Pass bridge in 1935 and the initial development of the Navy base in 1942. A century later, the population stands at just over 22,000.

The Fourth of July holidays, since they coincide with the one-hundredth anniversary of Oak Harbor, are the perfect time to celebrate with a parade, carnival, street fair and fireworks show.

The day begins with a Pancake Breakfast from 7 to 10 a.m. sponsored by the Rotary Club, a Vendor Marketplace all day long, two parades, BBQ lunch, community entertainment in the afternoon—and it ends with the largest-ever fireworks display, sponsored by Whidbey Coffee. This full schedule of events is brought to you by the Oak Harbor Chamber of Commerce.

These historical photos are being used with permission from the Island County Historical Society, Janet Enzmann Library and Archives. To use these photos or find out more about the library and their archives, contact Sarah Aldrich, Archivist, arc-ichs@whidbey.net, 360-678-3310.

Horse and buggy transportation in Oak Harbor in 1912

Market Day in Oak Harbor in the early 1900s