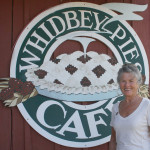 It’s common knowledge that one of the best places to have a slice of pie on Whidbey Island is Whidbey Pies Café at Greenbank Farm. It’s also no secret that the reason the loganberry, strawberry-rhubarb, cherry, Granny Smith apple, peach, huckleberry, and marionberry pies are so delicious is because Whidbey Pies Café’s owner and pie maven, Jan Gunn, has a passion for pie perfection.

What many don’t know, however, is that Gunn is equally dedicated to the continued advancement of her community and of Greenbank Farm, once home to the biggest loganberry farm in the world.

“The mission of our café is to support the farm. In 2004, we took pies to Olympia every week in search of help for the farm. We lobbied with pies, you could say,” said Gunn with a laugh. “It worked because we received a grant of $1.5 million from the state to build the third barn, remodel the second barn and add a small kitchen to the café.”

The café, with its charming wood floors and cozy seating arrangement, was once a gift store looking for a facelift. It was thought that this small corner of the Greenbank Farm might be an opportune place for an eatery. And, when Gunn saw the space, she couldn’t have agreed more. In her words, it was love at first sight.

“After I closed Whidbey Fish, a market and restaurant where I sold my pies, I swore I would never do retail again. But looking at this space, the sun streaming through the windows and the view of the pond…I said, ‘sign me up!’”

The addition of the café kitchen and the larger commercial kitchen inside the second barn (also known as Barn B or the Gary Ando Barn), coupled with an unparalleled reputation for being the queen of fruit-filled tarts, permitted Gunn to make more pies. A lot more pies.

“We take most of our pies to the Metropolitan Market in Seattle twice a week, so with that, the café and the addition of 3 Sisters selling our pies in their shop, we make over 50,000 pies per year.”

A staff of 26, under the watchful eye of general manager Tawnya Penny, makes every single one of those pies by hand and from scratch.

“I’ve been with Jan since the beginning,” said Penny. “For the first three or four years here, we didn’t even have a kitchen and did our baking at her house.”

But baking delicious pies is just a, well, piece of the pie—so to speak. Gunn’s desire to promote local food producers and bring business to Greenbank Farm begat a daily, seasonal lunch menu that features organic and local food dishes, including soups, salads and sandwiches as well as both savory and sweet pies (of course). The ever-popular First Friday Dinner, too, became part of the Whidbey Island food scene in 2006 with the purpose of adding another facet of enjoyment to Greenbank Farm’s “First Friday” artist reception.

“Greenbank is moving ‘First Friday’ to the second Sunday of the month starting in June of 2014. But the First Friday dinner has earned quite a following, so we will continue to offer them,” said Gunn. “Although we do plan to eventually have a meal for the Second Sunday events as well—more of a hearty family-style dish.”

In the commercial kitchen where bakers and pie makers—each of which Gunn greeted by name —were busily crafting hundreds of mouthwatering pies, Gunn explained, “It’s about so much more than the bottom line. It’s about the families who work here and about the farms and the farmers.”

Stop by Whidbey Pies Café at 765 Wonn Road in Greenbank 11 a.m. to 5 p.m. Monday through Friday and 10 a.m. to 5 p.m. Saturday and Sunday for lunch or pie (by the slice, whole or even frozen—by special order) or both. Visit the website or call 360-678-3474 for more information. Look for Whidbey Pies Café’s debut at the Whidbey Island Area Fair, Thursday, July 31 through Sunday, August 1.

Susan Wenzel, food writer, believes in the power of locally produced food to fortify the health and well-being of both the individual and the community as a whole.