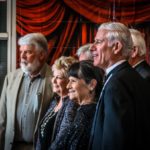 To celebrate their Centennial Anniversary in 2016, the National Park Service has challenged people all over the country to “find your park” and “share your story.”

Ebey’s Landing National Historic Reserve responded by challenging independent filmmakers to participate in a 50 Hour FilmSlam Competition: writing, producing, filming, editing and completing short films within a specified 50 hour time period. Filmmakers were asked to show what makes Ebey’s Landing nationally significant, and the results were described by the judges as “love letters” to the Reserve.

The competition culminated with a grand premiere of these films on Saturday night, June 11, at the “Ebey’s Reserve FilmSlam Film Festival”, at the Coupeville High School Auditorium. The audience was full of supportive community members and visitors alike who bought tickets to benefit the Reserve. Many purchased VIP tickets, enjoying a Red Carpet experience complete with gourmet catering. All proceeds of this event directly benefited the Friends of Ebey’s, who are working to preserve, protect and enhance the Reserve.

An award ceremony followed the screening; filmmaking team “Dakota Guys” was awarded the Judges’ Choice Award and team “WINOT!?” received the People’s Choice Awards. Team SOULLESS, made up of local Girl Scouts, received their Film Making Badges. The main consensus was that it was a tough decision to choose the winners, while the whole event was a win for Ebey’s Landing National Historic Reserve.

Competitors were asked to show and tell what makes Ebey’s Landing National Historic Reserve so unique. Many of them found inspiration in the nature that abounds within the Reserve’s 1,800 acres. This seagull was seen on the Reserve during the weekend of filming.

All films shown at the premiere were created from start to finish within the 50 hours permitted, with most filmmakers utilizing the full time allowed.

On the night of the premier, VIP ticket holders felt as though they were walking into an exclusive party as they approached the entrance.

The VIPs were swept onto the Red Carpet and photographed by local “paparazzi” as soon as they arrived.

Gourmet catered delicacies and all-ages-friendly sparkling juice were served at the Red Carpet party leading up to the grand premiere of the FilmSlam showing.

The VIP area was standing room only. It was an intimate affair.

Filmmakers were Special Guests on the VIP Red Carpet and anxiously awaited show time while they mixed and mingled at the party. Photographer David Stern managed to take this portrait away from the bustling scene.

The audience filled the Coupeville Auditorium and, before showtime, looked over the program, which included their People’s Choice ballot to cast a vote for their favorite film.

After the films were shown, there was commotion in the illuminated auditorium as filmmakers made their way to the stage for the awards ceremony.

There will be ongoing celebrations and community service work for Ebey’s Landing National Historic Reserve during the National Park Service Centennial in 2016. Visit www.nps.gov/ebla for more ways to support the Reserve and become part of the community that protects it.

David Stern and Madisun Elizabeth participated as a team making their film debut in the 50 Hour FilmSlam competition. Ebey’s Landing National Historic Reserve is a place they call home and regularly find inspiration. More about their various endeavors can be found at WhidbeyCustomPhotography.com or find Whidbey Custom Photography on Facebook.