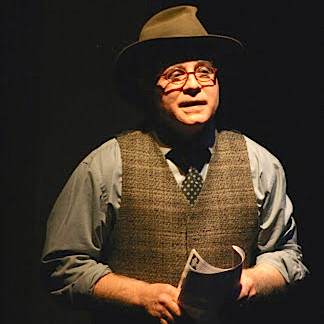 Acting and the Art of Construction: Jim Scullin

Little did Jim Scullin know, when he came to Whidbey Island, that he would act in dozens of plays and become a fixture of the South Whidbey community.

He and his family moved to Whidbey Island in 1992. They had visited the island before to see his wife Gay’s family.

“I was drawn to the silence and the stillness of this place,” Scullin said.

He had long built interiors for homes, specializing in cabinets and finished carpentry. It was a natural shift for him to help build the sets for the plays in which his son Michael participated at Whidbey Children’s Theater.

Scullin saw how much fun Michael was having and decided he wanted to try acting himself.

Martha Murphy, founder of Whidbey Children’s Theater, spoke fondly of helping Scullin make the transition from “behind the scenes” to onstage.

“He built sturdy set pieces that offered versatility and ease of handling and he always offered his help with a big smile!” she said. “I cast him alongside his son, Michael, for a cameo in the musical, “Huckleberry Finn,” on stage at the Clyde Theater. He was a stand out and the rest is history!”

In the mid-nineties, Scullin saw an audition notice for Martha Fury’s play “An Evening at the Crossroads.” Being of Irish heritage, he wanted to be part of the production.

“That really excited me. It was important to me because of my Irish roots,” he recalled. “I dared myself to audition and I got a role.”

Scullin as Michael in “God of Carnage”  at WICA October 2011 (photo courtesy of WICA, by Tyler Raymond)

He experienced a ripple effect of being in that show. People saw him in “An Evening at the Crossroads” and started asking him to participate in other productions, such as “The Miracle Worker” and “The Diary of Anne Frank,” for which he also built the set.

Tom Harris cast Scullin as part of a small ensemble cast in “Accomplice,” that played at WICA in 2004.

“If ever there was a breakout role, that was it,” Scullin said. “People would come up to me and say ‘I didn’t know you had that in you. You’re such a quiet guy.’”

Scullin has continued to act, both to entertain himself and because he enjoys collaborating with other community members.

“For me, acting is an exercise in being in the present…I like working with people on a shared challenge.”

Scullin pairs his love of collaboration and his carpentry skills to work for Hearts and Hammers. He has worked with the organization for over 15 years, recently serving as the board president. Similar to the community building of theatre, he enjoys that Hearts and Hammers helps people locally.

“We’re so effective at achieving our goals,” he said proudly. “There’s no end to the good.”

Scullin also used his flair for performing when he competed in the Mr. South Whidbey Competition; he imitated a horse race announcer’s voice to call the different stages of a person’s life. He found the text in the magazine “The Sun” and looks forward to reprising the performance at the 10-year anniversary of the competition later this year.

Scullin as Frost, Ken Church as Nixon in “Frost/Nixon” at WICA June 2012 (photo courtesy of WICA, by Tyler Raymond)

In 2012, Scullin took on the iconic role of David Frost in the play “Frost/Nixon,” directed by local filmmaker and playwright Richard Evans. He had worked with Evans previously on three of his films shot on Whidbey Island: “Harry Monument,” “Shadow of Rain” and “Shuffle and Cut,” as well as his play called “Club Dead,” produced at the Clyde.

Scullin is currently working on the role of Ariel in the Pulitzer Prize-nominated dark comedy, “The Pillowman,” written by Martin McDonagh at OutCast Productions. When he first read the play, he wasn’t sure that he had it him to play the role. Ultimately, he decided to take on the challenge.

“My character is so subtly complex,” he said. “What you finally learn about this guy is that he’s endless. If I do my job well, I will allow people to accompany Ariel on this nightmare.”

Scullin is grateful to his family for being so supportive of this avocation he has found later in life. He usually participates in one or two plays a year. The rehearsal process for a show can go on for six to eight weeks, which means he’s rarely home during that time. Luckily, he says that he and his wife both have their pursuits about which they’re passionate.

“My wife Gay and I have an agreement,” he chuckled. “She’s an enthusiastic baseball fan—she’s had season tickets for 25 years. During baseball season, she’s gone, and during theatre season, I’m gone.”

“The Pillowman” runs July 10-25 at the Island Fairgrounds Black Box Theater located at 819 Camano Avenue. Visit www.outcastproductions.net for more information. Tickets can be purchased online at http://www.brownpapertickets.com/event/wlm/1726326 or reserved by emailing ocp@whidbey.com.

Featured photo at the top: Jim Scullin in Our Town, WICA June 2014  (photo courtesy of WICA, by Tyler Raymond)

Katie Woodzick works at Hedgebrook as an External Relations Manager. She is also an actor and director who can be seen on local stages, and she is the host of the Theatrical Mustang podcast: theatricalmustang.podbean.com. She is currently directing “The Pillowman” with OutCast Productions.