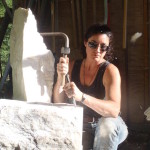 In the warp and weft of sculptor Alexandra Morosco’s recent life, the threads would be stone and the patterns inspired by an island distant from Whidbey Island’s shores.  Morosco’s connection to stone and the Irish spirit are captured March 4 through 28 in a showing of her work, “Evoking Ireland,” at the Rob Schouten Gallery in Greenbank.

Morosco on the shore of Inisheer, 2012  (photo courtesy of the author)

Morosco traveled to Ireland in 2005 with poet David Whyte on one of his annual tours. While visiting a farm there, Morosco—who is of Irish and Italian heritage—was handed the small book that changed her life. “When I was handed the book, “Irish Stone Walls, ”it was one of those moments when time actually held still. The book vibrated in my hands and I read it late into the night.

“Yes, a book on stone wall building quite captivated me,” she added. “Fast forward ten years later: Patrick McAfee, Irish author and master dry-stone waller, is one of my closest friends and esteemed colleagues. In hindsight, 2005 was a big year for connecting me to Ireland.”

With that initial spark that became an enduring friendship, Morosco returned to Ireland the following years. In 2012 McAfee introduced her to the island of Inisheer, which hosts an annual educational and training event called the Féile na gCloch (Festival of Stone). She was introduced to Paraic (Patrick) O’Conghaile, a fisherman and owner of a pub called, Tigh Ned’s. It was O’Conghaile who envisioned a memorial for fisherman lost at sea. He shared this dream, privately, with McAfee, who suggested Morosco as a good fit for creating the memorial.

Tools of the Trade  (photo by Kate Poss)

“And so it was! I simply said YES!” Morosco said. “It was, for the most part, a volunteer project. Karin Sprague, a letter carver, and I returned to carve the project in 2013 and were rewarded with pints of Guinness, brown bread and fresh fish delivered to our cottage each day! Who could ask for more?”

Since 2012, Morosco has returned each September to teach stone carving at the Féile na gCloch. In 2014, she was contacted by the Irish Army and asked to create a stone memorial for a soldier who had gone missing 30 years before. The young private was from Inisheer and a close boyhood friend of pub owner O’Conghaile.

Work in progress, memorial for Irish soldier, commissioned by The Irish Army and U.N. Forces. Completed March 2015   (photo courtesy of the artist)

Morosco was touched to be invited to do a second project on the island. “It’s impossible to explain the interwoven nature of the island and its people,” she said. “It is probably also impossible to explain what an honor it is to be ‘let in’ and welcomed to do this deeply personal work, as an outsider, or a ‘blow in.’ I am honored beyond measure by these opportunities for my hands and heart to go to work.”

She plans to return to Inisheer this September to work with the Festival of Stone.

During a recent visit at her fairytale stone cottage along a meandering creek, Morosco’s pair of Tibetan Mastiff dogs go through the ritual of sniffing me, assuring their mistress I am safe to enter. A raven calls from somewhere up in the tall firs and cedars.

Inside the old kitchen, the smell of chocolate wafts from the oven. Her Irish grandma’s kitchen table, a hand-painted metal reminder of years ago, stands across from the stove. The place feels like home to me, and Morosco says it reminds her of Ireland’s west coast. But she knows that Whidbey is her heart home.

“I found my place here on Whidbey,” Morosco said, having lived in the Puget Sound since 2002. “I like to visit other places, but when I come home I weep [with gratefulness]. Sure I’ll complain about the grass-mowing and the creek overload; the creek has visited the house many times in the years I’ve lived here.”

Her home includes an old garage, now a studio, with a large window that lets in beautiful light. Shelves are lined with various sanding disks, drills and chisels. She refers to her array of pneumatic drills as her “soldiers.” At the moment Celtic music is playing, but Morosco also likes listening to the poetry of David Whyte and the poetry of John O’Donahue, beloved by the Irish people.

Standing on her worktable is an image of a woman who looks like she’s emerging through the wind. She is “Anima Loki” and is carved of limestone. The wind lady is going to be part of the show at Rob Schouten Gallery.

“The image is inspired by a cliff’s edge… a feeling of undefined vulnerability,” said Morosco. “She depicts fierce wind, bracing and facing. Wind, water and stone are inherent elements of Ireland and Whidbey.”

Then there’s her sculpture of a little boat being tossed in the waves, which is also part of the upcoming show. Carved of Colorado marble, it’s called “Currach’s Portal.” A currach is a small sturdy boat used by Irish fishermen. Once made with sealskin, modern versions, coated with sealed canvas, are still used today on remote islands such as Inisheer.

Outside, under an awning, stands a stone woman emerging from salmon-colored Utah sandstone. She is called “Ghobnait On Pilgrimage.” Ghobnait was a medieval Irish saint whose convent was based in County Cork, Ireland. According to lore, Ghobnait had family troubles and fled to Inisheer, where an angel told her to establish a convent back on the mainland. Her order raised bees and believed in the healing benefits of honey.

Morosco and her pneumatic ‘soldier’ drills   (photo by Kate Poss)

While she typically creates large pieces for commissioned projects, this gallery show, her first on Whidbey, includes smaller pieces. “I haven’t had the luxury, in the past, of creating pieces of my own to show in a gallery,” she said. “But then I met with Rob [Schouten] in December and thought, ‘What if I put a fire under my ass and get this ready by St. Patrick’s Day.’”

Gallery owner Rob Schouten said, “As a gallery, we are always on the lookout for accomplished professional artists that fit in with the gallery’s philosophy and overall feel. If those artists then also live and work on Whidbey and haven’t shown here much, things get really exciting. Alexandra Morosco is such an artist.

“Morosco’s work evokes a deep connection with the land and the people inhabiting the land,” Schouten added. “In both her stone and bronze sculptures she’s able to capture an archetypal essence in her subjects that transcends ordinary reality and reaches a deeper mythical level. It’s no wonder, therefore, that Alexandra is attracted to Ireland and the deep layers of story and culture that predate modern sensibilities and are so prevalent there.

“There’s a quality of magic realism to her sculptures that immediately imparts to the viewer the notion that these are soul images, generated in the dark and fertile ground of a life well-lived, with consciousness and awareness. We are very happy to be premiering Alexandra’s work here on Whidbey and to introduce this wonderful artist to our community.”

“The Celtic Apprentice.” Italian Marble   (photo courtesy of the artist)

Look for Morosco’s work throughout March at the Rob Schouten Gallery. The public is invited to the Opening Reception from 5 to 7 p.m. on Friday, March 4. Enjoy music by Irish fiddler, Randal Bays & Friends.

Additionally, the public is invited to a “Meet the Artist” event from 2 to 4 p.m. on Sunday, March 20. A presentation, “Storytelling in Stone,” will explore how Ireland has captured the artist’s imagination, her work-based pilgrimages to Ireland, the stories behind the sculptures and the journey ahead. She is considering returning to Ireland this spring, taking the ‘Evoking Ireland’ exhibit to Connemara and retreating in the Irish countryside and people that nourish her.

Image at top: Morosco carving at her Whidbey studio  (photo courtesy of the artist).

Leave a Reply to Kris Rodden