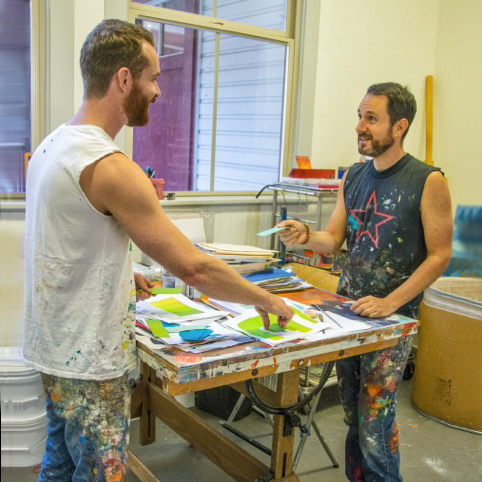 All Eyes Are on Stallman Studio’s ‘Canvas on Edge’

There is sculpture, and there is painting; rarely do they intertwine. Yet Stephen Stum and Jason Hallman of Stallman Studio have blended the best of both worlds in a technique of their own design they call “Canvas on Edge,” creating visuals so stunning that they’ve recently gone internationally viral.

Stallman—their professional name combined from Hallman and Stum—moved to their current studio on Whidbey in 2013, taking up residence in the old Bayview school. Their space is calm, yet filled with creativity, and perfectly matches the two artists’ serene personalities. In their work, the artistic duo uses strips of canvas placed on edge to build a three-dimensional maze of tendrils, in hues from every facet of the color spectrum.

Stephen Stum selects canvas strips in the studio. Behind him are trays of all the canvas colors, organized and available to consult as the duo works on new pieces. (photo by Marsha Morgan)

The genesis of their mesmerizing style is a tale of serendipity. Together romantically and professionally for nearly four years, the pair began their artistic career at a work studio in Capitol Hill before moving to a space in Madison Valley. During the move, they brought some leftover canvas from their old studio with them.

“We had a live-work housewarming in the new studio, where friends were asked to paint on two wood panels to inaugurate our new creative space. Those two panels were then used as the backgrounds for our first canvas sculptures,” said Hallman.

Using the canvas they brought from their old studio and the two painted panels made in their new space, they began experimenting with ways to combine these “old” and “new” materials. It was through this symbolic pairing that they created their first set of canvas sculptures, titled “Eight Thousand Square Inches.”

Since developing their technique, the pair has evolved a method for producing their entrancing, organic style of art. “It’s a bit like a dance, working in tandem and responding to each other as we create and gain momentum,” said Hallman.

In the process, bolts of raw canvas are first painted and cut into strips—the most laborious step. From there, the artists build unique, undulating designs inside thick frames. Sometimes planning out their compositions, other times creating in freestyle, their partnership comes above all else.

When asked about working together on something so intricately crafted, Hallman and Stum replied collectively that it’s a meditative process.

“We’re two energies working together. Sometimes you let the other take the lead; sometimes you take control,” said Stum. “It’s about trusting each other and learning to give and take. We are two totally different people, but we couldn’t have been on this path together if we weren’t.”

Their sculptures (or paintings, depending on how you look at them) range in size from two feet to more than eight feet long—enough room for their color-saturated canvas strips to fade seamlessly in and out of each other.

Recently, their path has brought the two into the international spotlight. After a feature in the art blog, “Colossal,” Stallman Studio went internet viral with over 20,000 website views in just two weeks. The pair was contacted by collectors and galleries from all over the world, including Australia, Germany, Spain, the Netherlands and even Dubai. “It’s a little bit unreal, to see how widespread our work was. It had been reaching so many markets we didn’t realize,” said Stum.

The media attention has given Hallman and Stum a bright outlook for the future. “It boosted our own confidence, to see the excitement that everyone else had for our work.” The partners see it as an opportunity for their art to reach a global market and a time to explore new methods, possibly even large-scale public art. For now, they’re adjusting to the shift in audience and anticipating the change to come. “It’s still surreal,” said Stum. “We’re both really excited.”

Hallman (right) and Stum (left) look at plans for a piece. The final product is often a mix of freestyle and planned design (photo by Marsha Morgan)

Stallman Studio is currently represented by galleries in Bellevue, San Francisco, Carmel by the Sea, New York and Chicago. Stallman does not currently have any upcoming shows in the area, but a few of their works can always be seen at Hall-Spassov Gallery in Bellevue. To see more of their work, visit stallmanstudio.com. Their Facebook page can be accessed here.