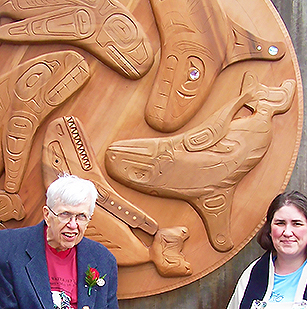 An Emporium of Arts on Whidbey Island

Whidbey Island’s forests, beaches, rolling farmlands and quaint villages are what usually first attract visitors. But as they return for more visits—or never leave—they notice an abundance of the arts—doctors who sing, business leaders who paint, a sheriff who writes…

From professional artists to dabblers, it might look like Whidbeyites are all out playing with pen and paper, paintbrushes, musical instruments or other tools of their arts.

The first Whidbey artists were the Native Americans who canoed and fished the waters surrounding the island. They developed a distinctive Northwest style of carving passed along to descendants such as Central Whidbey’s Roger Purdue. Of Tsimshian heritage, Purdue shared his deep love for his culture and for nature with his Oak Harbor Elementary School students. Although Purdue passed away in January, for 20 years he created the design for Coupeville’s annual Penn Cove Water Festival, which boasts tribal canoe racers, storytelling, Native arts and crafts, and dance performances.

Susan Berta, cofounder of Orca Network and key player in the return of the historical Water Festival, said that Purdue also designed and carved the popular Salmon Wheel (now at the Island County Museum in Coupeville). The Whale Wheel installed on the Coupeville waterfront also bears his signature style.

“These were huge cedar interactive carvings based on the spindle whorl, with the large salmon and whale wheels mounted on a backboard so passersby could set the wheel in motion and watch the salmon or orcas spin around,” Berta said.

When the Salmon Wheel began to warp, Purdue came up with a design for a whale wheel to honor the orcas that were captured and killed in Penn Cove in the 1970s. Although Purdue was no longer able to carve, he managed to see the project through. “He brought a group of Coupeville carvers together to carve the orcas for the wheel, because he wanted to see the carving community kept alive,” commented Berta. “Roger was always thinking of the future, of the community, of sharing his talent and knowledge, of teaching others. His generosity, talent, and love of art and nature will be a part of Whidbey Island forever.”

In 1915, Margaret and Peter Camfferman purchased a home on Whidbey Island. Margaret, a Min-
nesota native, had met Peter, an artist from the Netherlands, at the Minneapolis School of Fine Arts. Once they found Whidbey, they created an artists’ colony they called Brackenwood. Among the earliest Modernist painters in the Northwest, the Camffermans welcomed internationally-renowned artists from around the world to the Northwest. Langley’s Brackenwood Gallery is named in honor of that early artists’ community, and paintings by the Camffermans are now part of the Seattle Art Museum’s permanent collection.

The Clyde movie theater at night (photo by Robbie Cribbs)

The Clyde is a funky old movie theater from the 30s—so popular that today there’s a waiting list to be voluntary ticket-takers. When Blake Willeford purchased the movie theater in the early ‘70s, he invited local musicians, dancers and actors to use the venue. “There was nothing to do back then,” said Lynn Willeford, “so you had to amuse yourself.” In addition to running The Clyde, the Willefords are involved in many projects that support the community. Looking back on the past decades, Lynn said she watched Whidbey go “from hippie to hipster in 40 years.”

The lure of cheap land in the ‘60s brought people like Linda and Leonard Good to Whidbey. “There was a lot of generational overlapping,” said Linda. “The young people, many of them hippies, were interested in an artistic path and a closer-to-nature experience, and the old-timers mentored them.”

Since then, Linda has taught generations of Whidbey musicians through the auspices of Island Strings, a network of strings teachers who each meet with students in their own locations, teach according to their own philosophies, and team up for summer camps and music events.

Many recipients have become professional artists and musicians, including Gloria Ferry-Brennan. She began playing the violin in Good’s “Pre-Twinkle” class. “I don’t think I would have had nearly as many performance opportunities if I had lived anywhere else. The entire community on Whidbey Island has been supportive of my music and of me as a person.”

All the arts are represented, including theatre. Oak Harbor’s Whidbey Playhouse staged its first production in 1966 and has been going strong ever since. The small town of Langley (population 1,100) boasts no fewer than five theatre companies. And South Whidbey hosts not one, but two nationally-known literary nonprofits.

The Whidbey Island Writers Association (WIWA), started by Celeste Mergens 15 years ago, supports a nationally known writing conference. WIWA is now under the umbrella of Northwest Institute of Literary Arts (NILA). In addition to conferences, workshops, classes and other resources for writers, NILA publishes its own magazine, “Soundings Review,” and offers the first MFA in Creative Writing awarded by a writing association rather than an academic institution.

A welcoming cottage for writers at Hedgebrook (photo by Tom Marks)

Barbara Joy Laffey is one of the recipients of a Hedgebrook residency who later moved to Whidbey Island. “My experience at Hedgebrook was unbelievably supportive, but what made it particularly magical was my daily walks down to Double Bluff Beach.” By the time Laffey spent a month on Whidbey, she realized she could no longer live in Los Angeles. “There was such a great writing vibe on Whidbey that I came back to work on my book. I found such a supportive community, including the Whidbey Island Writers Association, that I just couldn’t leave.”

No matter how long people stay on Whidbey—from a visit to a lifetime—they often tell versions of the same story. Stories like Susan Hanson’s, whose “visit” is now in its third year. “I felt this little crooked finger beckoning me to come out and play, and that it was safe.” Hanson had always wanted to sing, and with the encouragement of islanders, she began taking voice lessons. Although she admits her first public perfom- ance wasn’t stellar, “the energy in the room was so supportive that I was motivated to try again and again, and it just got better.” She credits the community. “Whidbey feels like this collective supportive soul—and that’s where creativity comes from, right?”

Roger Purdue with his cousin Diana Ferree, her daughter, Jennifer Leathan and granddaughter, Grace Leathan, at the dedication of the Whale Wheel. Diana and her family are Native American dancers (photo courtesy of the family)

When you’re lured by Whidbey’s natural beauty, and that “collective supportive soul” beckons and gives you the tools, the encouragement, and the continued support of its community of artists, watch out. You might just find yourself saying, “Okay. I’ll come out and play!”

Suzanne Kelman is an author, also a multi-award winning and optioned screenwriter and blogs for WLM.

Deb Lund is a children’s author, creativity coach, and a mom who creates in the middle of chaos and blogs for WLM.