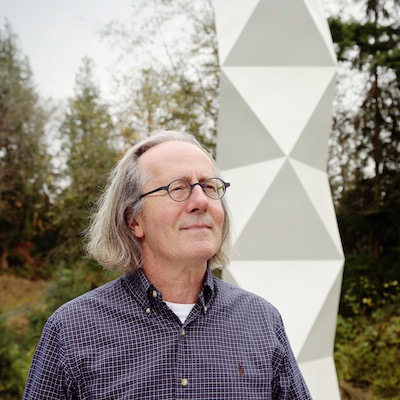 Last week’s election news gave rise to emotional swirls and storms that left some of us searching for solid ground amid the chaos of opposing perspectives. Perhaps one way to make sense of the shadow and light within our country is by visiting the Infinite Tower, unveiled at the Earth Sanctuary late last month.

The newest addition to the 72-acre Buddhist-inspired nature reserve and sculpture garden is a modern sculpture similar in shape to an obelisk, only one containing triangle-shaped facets.

“I conceived the idea of the Infinite Tower less than a year ago, when I printed polyhedra and started stacking them,” says Chuck Pettis, an innovative entrepreneur and author of “Secrets of Sacred Space.” The tower was unveiled to guests on Oct. 29, just after the sun came out on an otherwise rainy day. “I brought together some smart and talented people, and there you go. You can’t do great things without great people.”

“What struck me was how fun it was to work with everyone on this,” says Leonard. “They (Pettis and Swett) came to me with a plastic model and asked me to make it in metal. It was a big project, one of the largest I’ve done. I bought a tent to hold it all. I’ve never said no to a project.”

Pettis said the symbolism within the design includes: creating a connection between earth and sky; white as the color of clarity and purity (which reflects shadows and shapes on the sculpture); honoring the nearby trees and snags, which join the earth and sky; and incorporating the number eight (eight triangles in each octahedron) and the number seven (seven stacked octahedrons), which, in numerology, symbolizes harmony and spirituality.

Picasso took apart the universe and reconstructed it in geometric art forms. Pettis looks at the world in terms of basic shapes and how they influence us, says Claudia Pettis, Chuck’s wife. “Working with triangles connects him to the cosmos,” she says. “We can know the power of the infinite column; it connects earth to sky.”

Influenced, in part, by the works of Constantin Brancusi, considered one of the most important sculptors of the 20th Century, Pettis found inspiration in the sculptor’s “Endless Column,“ which was built in 1918. Pettis’ ingenuity in creating the tower was further sparked by a visit to the Storm King Art Center, located in the lower Hudson Valley of New York State. Some have described the 500 acres filled with art as being “heaven for sculpture.”

“I like what they did at Storm King and thought, ‘What could I do on a small scale?’” says Pettis.

On a September afternoon, when a towering crane lowered the 25-foot tower into place, Pettis, Swett, Leonard, and the crew grinned like boys having their ultimate adventure.

Freeland novelist and artist Fred Bixby, who is a legally blind, visited the tower that same afternoon. Swett’s wife, Sarah Birger, who was there for the tower’s installation, guided him to the sculpture where he could touch it with his hands.

“Maybe because of my lousy vision, every panel looked slightly different in color, even though I know it’s all white,” said Bixby. “I love the total smoothness of the metal. I really tried to find where Tim, the artist, joined the sections, where there were cracks and seams. I never found any. I will try again, though. Next time you’re there, go up close and listen hard.”

Chuck Pettis’ intention for the Earth Sanctuary is that it inspire a sense of well-being and spiritual uplift for years to come. To this end, he has created a 500-year trust that ensures the sustainability of the property. To date, more than 3,000 trees and 15,000 kinds of vegetation have been planted that are expected to last through our earth’s climate change into the year 2500. He imagines the sculptures will last at least that long, too.

Kate Poss worked as a library assistant at the Langley Library until last June. She was thrilled to work for three summers as a chef aboard a small Alaskan tour boat from 2008 to 2010. She was a newspaper reporter in Los Angeles for many years before moving to Whidbey Island where she likes “talking story,’” hiking, hosting salons, and writing her novel.