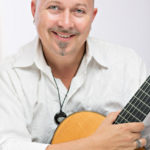 The evening started with a conversation.

The room was warm and welcoming, with a wall of rustic brick and an inset fireplace. Soft lights accented tell-tale signs of a life’s journey; an antique globe on the mantel, a Mayan calendar on a wall, chairs from Spain and perhaps Italy.

There, on a stool, Andre Feriante sat at the center of the room. Stringed instruments patiently waiting at his side included guitars, a banjo, ukuleles, and a harp guitar. A group of about 30 people gathered around him in a semi-circle, silent and respectful. Feriante’s eyes twinkled with an inner joy and peace as he welcomed his guests with a smile and a conversation. Yet, no words were needed—just the notes, the emotion, and the music.

To Feriante, music is about love and hope and compassion. It’s about emotion and healing, and for him personally, it’s all about the story and message. The intimate group gathered in his living room that evening had come to experience all of that firsthand, and they were not disappointed.

As the beautiful melodies of Spanish guitar introduced the musician, the audience sat spellbound. One man sat with eyes closed and a soft smile on his face, the music washing over and through him. Others sat in silence, eyes locked on the guitar as Feriante’s fingers danced across the strings. The stress of the day, the problems of the world, all melted away to be replaced by the peaceful, emotional music.

Feriante is a Segovia-trained guitarist and composer who recently made his home on South Whidbey Island. He has fourteen albums to his credit with many ranking in the top 10 of radio airplay charts. His album “Bohemian Boulevard” was in the top 20 on the World/Ambient music charts for five months and received Best World Album at the 2006 New Age Reporter Lifestyle Awards.

Like so many on Whidbey Island, Feriante’s arrival here followed a life journey of learning and traveling. “As an artist, you have to put yourself where you want to be,” he says. His masterful and improvisational playing, a delightful blend of flamenco, jazz, classical, and popular music, started its development in Italy at the age of 13. It was an invitation to a flamenco concert that sparked his love of the guitar and propelled him into lessons.

That love eventually led him to train with Andres Segovia in Spain. His journey continued with a career of playing concerts throughout Europe, South America, and North America. His path continued on, leading to Seattle 28 years ago, and then to Whidbey Island last October.

Over the years, Feriante’s music has had its own journey. He started out playing only classical guitar, but “In my early thirties, I went through a time of personal transformation,” he says, “I wasn’t always aware of the healing powers of music.” His personal transformation helped his music evolve. “I began seeing inside the workings of sound and art and human, non-verbal intention.”

Feriante also learned of the power of silence and how music and understanding arise from that calm place. “I’m talking about looking into yourself,” he says, “and seeing the vast beauty that is really there … as you gently listen and spend the time, your inner eyes will see more and more, intuition will increase, awareness of your ‘inner forest’ will increase.” He went on to quote Segovia, “It’s better to move them than amaze them,” and then the great philosopher Plato, “Music gives a soul to the universe, wings to the mind, flight to imagination, and life to everything.”

Here on Whidbey Island, in the latest step in his life and musical journey, Feriante has found an outward forest to compliment his inner one. On his first night living on the island, he had a “mystical dream experience” where he felt a connection with the forest, the animals, and with the natural world. Since his arrival, he’s also found himself writing more and feeling much more artistically inspired than he did when living in Seattle.

Music is an experience best shared, and on February 11, you will have the opportunity to become a part of Feriante’s amazing journey. For the 22nd year in a row, he will present his annual “Day of Love” concert. “The Four Seasons of Love” will feature Feriante and his “Bohemian Entourage,” a collection of extraordinary artists that includes pianist Overton Berry, tenor vocalist Steve Thoreson, dancer Stella Rossi, tabla player Anil Prasad, and bassist Jeff Davies.

To experience the magical music of Feriante, visit andreferiante.com to purchase tickets to the “Day of Love” show. It will be held at 8 p.m. on February 11 in Benaroya Hall in Seattle.

Feriante says it’s important for people to understand what art can do for them on a psychological, intuitive, and spiritual basis. There is also personal growth, he says, in the act of using one’s own money to purchase art and music. People become personally invested in the creation. So, consider contributing to your own growth while enjoying a wonderful Valentine’s Day weekend concert with Whidbey Island’s Andre Feriante.

Shawn Berit lives near Maxwelton Beach on the south end of Whidbey Island. He freelances as a social media manager for churches and organizations. A father of three and an all-around creative, Shawn paints and draws fantastical scenery, story illustrations, and science fiction concept art. He is a nature photographer, a vocalist wanting to start a band, a science fiction writer working on his first novel, and a television and voiceover actor wishing the island had a radio station. He is also one half of the Dakota Guys on YouTube and in love with all things Whidbey Island.