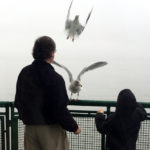 Castle on Whidbey || Aren’t We All in the Same Boat?

Have you ever had your car not start when they’re loading or unloading the ferry? There you sit. Helpless. Cars pulling around you. The stares. The poor car behind you.

Ever have that dream when you show up at school, and you’re in the lunch room, classmates everywhere, everything seeming normal, then you look down and realize you forgot to wear pants?

Now, they do have that super-duper battery charger that must be issued only to the ferry service, the military, and NASA because it is so damned fast. I am waiting to hear the first guy slap on the clamps and yell to his buddy, “Clear!” It’s like a giant defibrillator for your car.

But the heart attack victim rarely gets a host of stares that imply, “Forgot to take his heart meds again? What a dope.”

The dead-battery fellow though, is drenched in shame. “It’s my wife’s car!” I have partially fibbed before. No one falls for that.

Having lived on this beautiful island for eight years now, ferry travel has become an important, ingrained aspect of our family’s existence.

The chosen ones (Photo by David Welton)

My favorite memory about ferry travel was a short conversation that my wife Laura and I had with a woman on the deck of the ferry. Laura and I had walked our two little dogs on the ferry and were standing at the front of the boat out of the way of the wind. Next to us was a tall and pleasant middle-aged woman.

“What cute dogs,” she offered, looking down at our blondish Lhasa and black Scottie.

“I have a dog and always thought about bringing her on the ferry. Is it difficult?”

“Nope. Just walk ‘em on leashed, and head to the front. You can’t take them upstairs, but it’s a short trip. What kind of dog do you have?”

“A Doberman. She’s a good dog. Yeah, I think it would be really fun to walk her on. She’d enjoy it.”

The ferry was nearing Clinton, and crew members were strolling to their positions.

“Oh?” Laura and I asked in unison.

“There are two things she hates. She actually goes berserk if she sees either one. I mean berserk.”

“What are they?” we asked, both trying to come up with a couple good guesses.

“Men and the color orange.”

Time stood still for a moment. Laura and I raised our gaze up and over the lady’s shoulder to focus on the two large, male ferry workers in the bright orange vests.

“If she sees either one of those things. Oh, it is not pretty. I have no idea where that comes from.”

Timing and catching the ferry can become a sport for us locals. There is an art to it.

I both amaze and annoy Laura when we get on the dock and I say, “Oh, shoot, we aren’t going to make it. We’re going to miss by, ah, six cars. Damn.”

“How do you know? Just relax. Be positive.”

“I am positive. I am positive the ferry woman is going to hold up her hand in front of that silver Prius six cars in front. We’re in lane 13. Get it?”

Caption contest. Have at it in the comment section below. (Photo by Laura Castle)

That’s always met with a big sigh, and my surety that Laura is thinking, “I hope he’s not right because it will just encourage him. But, if I was forced to bet, that Prius ain’t makin’ the boat.”

And, the hand goes up, and the Prius driver pounds her forehead lightly on her steering wheel.

One of my finest hours was when I really needed to make the next boat for a doctor’s appointment. I had my son Wilson with me. He had Ducky with him. Ducky has been a part of the family as long as Wilson has. Ducky is showing his age a bit more than our seven-year-old, but is still intact and important.

I saw that we didn’t make it, and missed by just two cars. I grabbed Ducky and held the stuffed, almost white, almost fluffy companion up at the windshield and got the attention of the ferry worker. I crossed Ducky’s wings across his heart, bowed his head, then had him reach for the heavens in a pleading manner.

The ferry worker with the clicker and the vest, and with — at that moment — the power of an emperor, laughed, spoke into her lapel, and motioned both cars onto the ferry.

Safely tucked at the back of the boat, the lady driving the car in front of us got out, walked up, and thanked me.

Then there is that prized and precious medical excuse for moving to the front of the line. What a glorious thing. Glorious enough to hopefully take one’s mind off the reason one has earned the excuse. For a medical pass to be warranted, the particular trip must have medical urgency to it. I think the scope should be expanded. For example, coming back from the doctor there is rarely the same urgency.

I think there should be more factors in granting these passes. It should be on merit. Not for the appointment, but for the ailment.

I think they should line us up four or five at a time and ask what we’re going for.

“Ah, X-ray to see if my bone is setting properly.”

“Hey, you with the hemorrhoids, hold up. This guy’s going in front of you.”

When my wife was nine months-plus pregnant, and we were running — or trying to run — from the parking lot to the loaded ferry. The ferry worker did the unimaginable. She put the gate back up and called for the ferry to wait. With me fretting and Laura waddling, we made it. The ferry was late arriving at the other side. And, thankfully, so was Wilson.

I have noticed there is nothing that brings people from different walks of life into solidarity more than the occurrence of a ferry line cutter. Instantly a rock-solid team spirit is formed.

There we are, up the hill in Mukilteo, inching along, when at a corner, a passing car doesn’t turn right, but . . . jumps into line.

“You bet your life.”

The drivers of the cars that witness this atrocity are suddenly banded together. From the sweet, knitting grandmother to the rifle-toting pick-up driver, and anyone in-between, we all coalesce instantly into a torch-carrying mob.

After we have bided our time and fumed, we finally make it to the booths. “See that blue car? It cut in line back there.”

“Did anybody else see it?

And the mob rejoices.

I try never to wish bad on anyone. Each Sunday, I hear how I should act. And I try. But if a car slides into line out of order, all bets are off.

Summer tourists add a wrinkle. They just don’t seem to get it.

I hope you have never mistimed a journey so poorly as to be stopped 100 yards from Ken’s Korner. But if you have, your life, very likely, slowly passed before your eyes.

The basic ferry line down in Clinton though, usually moves along often in a palpable, meandering clip. Visitors, on the other hand, come to a stop in the ferry line and panic.

Who hasn’t felt a little guilty smirk at seeing the dad running out of Dairy Queen and doing a big double take at where his car used to be. Then he takes off past the row of slow-moving cars with a bobbing bag of warm food and a couple sloshing drinks in search of his family.

Then there is the car alarm on the ferry.

The serenity of the Whidbey ferry gliding across the smooth water is only broken by that @*#% car alarm! (Photo by David Welton)

It is always a BMW.

Does the car owner want everyone on the ferry to know he owns that car?

He, I feel, hears, “Will the obviously well-off and successful owner of that fine and expensive automobile return at his convenience and turn off the vital security system that has been activated?”

We, on the other hand, hear the same announcement with a different flavor. “Will the pompous, selfish creep, who thinks he is so important that we are all dying to sift through his belongings during the 12 minutes of this trip, please stop complaining about having to drink wine out of a plastic cup, and high-tail it down to shut that @*#% thing off?”

Finally, pulling us all together. Who hasn’t, at some point, come down the stairs, arrived at the car deck, stared straight at the driver’s door of not your car, and realized that you have no idea where your car is on the ferry. I know I have. And at that point, I look down quickly to make sure I’m wearing pants.

Every islander has a ferry story. What’s yours? Please share it in the comments section below.

Cameron Castle is an author and a stay-at-home dad. His recently published memoir is titled “My Mother Is Crazier than Your Mother.” He lives on Whidbey Island.