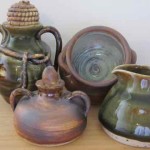 Artworks Gallery announces Marcia Muchnick as featured artist for the month of February starting with a First Friday reception from 5-7:30 p.m on Feb. 5. Light snacks and beverages will be served and guitarist Quinn Fitzpatrick will be performing. Other Artworks Gallery artists will be on hand to greet visitors during the reception.

Marcia, originally from the East Coast, came to Whidbey in 2011 picked up a ball of clay at Bruning Pottery in Snohomish, and has been throwing and hand building  ever since. She intended to pursue her career as a massage therapist and has rearranged her time to keep up with the demand for her pottery . Marcia says, “my aim is that almost every piece not only have a function but is a work of art in itself.” All Marcia’s pieces are highly functional as well as having an old world rust charm.

Artworks Gallery is located on Greenbank Farm on Whidbey Island.   For more information, visit the web site: artworkswhidbey.com or call 360-2223010.