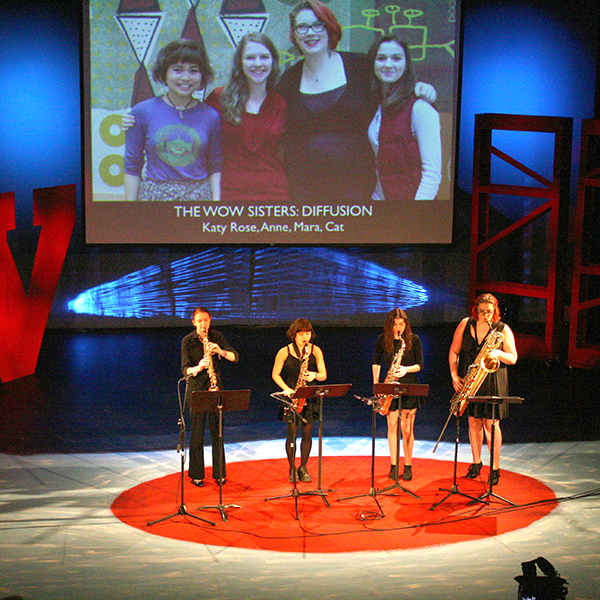 Imagine standing in the spotlight telling your story with confidence and grace.

More than two dozen of Whidbey Island’s talented women took to the limelight for the Fifth Annual WOW! Stories held at the Whidbey Island Center for the Arts in Langley on March 11 and 12.

Musician Kristi O’Donnell, a bassist with the gypsy jazz band Trio Nouveau, opened the event with music the first night. Her band performed “Blues for Hildegard,” a piece O’Donnell composed based on the poetry of Hildegard of Bingen. “The song is about living the creative life and celebrates love from the stars and the beauty of the natural world,” she said. O’Donnell is also an artist and has a show at Prima Bistro through the end of this month.

The motto of WOW—an acronym for Women of Whidbey—is “inside every woman is a story worth sharing” (and often they are stories one might not expect). WOW! Stories grew from Diana Lindsay’s inspiration in 2012 while she was watching TED Talks (“Technology, Entertainment and Design”; learn more at https://www.ted.com/talks).

Why not organize a TED-like talk, she thought, for all the interesting Whidbey Island women. She shared her idea with friends and, within two hours, the women had agreed to make WOW a reality. Her can-do friends—Rene Neff, Lynn Willeford, Mary Fisher and Debora Valis—created Seriously Fun Productions and the first WOW! Stories event was held in 2012. Ticket sales supported Whidbey Island Center for the Arts (WICA) and Whidbey Island Nourishes (W.I.N.). Shannon Arndt and Heather Racicot joined Seriously Fun Productions in 2013.

Another speaker this year was Toni Marthaller-Anderson, an integrative nurse practitioner at Women to Wellness in Greenbank. A passionate advocate for promoting gut health, Marthaller-Anderson hosts regular workshops on healthy eating along with ways to nourish the billions of good bacteria that live in our digestive system.

“Well, I decided to participate in WOW because I had a gut feeling that I should,” she said. “The ‘Seriously Fun’ women are supportive, organized, energetic and simply awesome.”

Giving homage to our ancestors, Julie Glover sang three Celtic laments. “I chose to share these songs at WOW! because they give a rich sense of the lives of our ‘foremothers’—our ancestors upon whose shoulders we stand today,” Glover said. (You can hear “I Once Had A Sweetheart” here.

Kathryn Lynn-Morgen works in theater as a designer, actor and director and helped create Langley’s annual Pride Parade. She spoke about how, through the alchemy of theater, we can create our own worlds: “You can find yourself,” she said. “Suddenly you have a voice. You have ideas and beliefs. You recognize your own personal creativity and process. It is exhilarating. It is terrifying and joyous and heartbreaking and healing.”

Marilyn Main bought tickets for the second day of WOW! Stories and said she was brought to tears after hearing the story by Katy McGregor, who talked about her role as a surrogate mother. The original family, she said, eventually decided that they didn’t want the baby after all. But through an odd twist of fate, her baby became the balm for a bereaved couple who had just lost their young daughter.

Main said she was impressed, also, by professional boxer, Dakota Stone, who held the title of Top Ten Women Boxers of the World for a decade. Stone owns Solid Stone Boxing Gym in Clinton and trains women, men and youth in boxing skills, confidence building and physical and mental fitness.

Other speakers and performers at Wow! Stories included:

Barbara Dunn, PhD, LICSW, MT-BC, who is a musician and has produced four CDs. She is also a music therapist, social worker, psychotherapist and author of the books “More Than a Song” and “Exploring the Healing Art of Music Therapy.”

Chris Peterson, who traveled the world in the 1970s and then worked for a number of nonprofits in the housing, education and environment fields. She created the popular Public Radio show “BirdNote” (http://www.birdnote.org/shows) and has since retired as the show’s executive producer.

Carrie Whitney, an artist, teacher, mother, wife, and friend. She spoke about how she integrates her life into her art.

Claudia Walker, who sings, plays instruments, has taught music and works as a music therapist, integrating music and medicine for end-of-life patients.

Pam Schell, an avid supporter of local arts, who runs the Inn at Langley and was married to Paul Schell, former Seattle Mayor.

Trish Rose is a Major General with the Air Force. She is currently the highest-ranking openly gay member of the US Military.

Josh Hauser grew up in a dusty Texas town and owns and runs Moonraker Books in Langley—a decidedly undusty and green place. She’s owned the bookstore for more than 40 years.

Melissa Young once built cabinets. After getting involved with building a school in Nicaragua 30 years ago, she began producing social justice documentaries.

Brook Ott is a nurse practitioner at South Island Medical. She spent her early days on the island and now treats elder patients she knew as a young girl.

Elizabeth Guss currently works as a pastoral administrator at St. Hubert Church in Langley. She also worked as a major fundraiser for the Whidbey Camano Land Trust. Guss is a co-author of the book, “Whidbey Island: Reflections on People & the Land,” which celebrates the island’s history and explains its remarkable appeal.

Jeanne Strong is an educator known recently for her efforts in promoting peace in the war-torn African country of Burundi, where she is committed to educating its children. She is a guardian-ad-litem, advocating for children in foster care, and continues her involvement in schools as a consultant in helping to develop healthy learning environments.

Linda Good, founder of Island Strings, is a long-time strings teacher and musician of South Whidbey. She has taught hundreds of South Whidbey children to play the violin and to appreciate music

Erin Morgan, a self-described “strong and willful woman,” talked about fitness, nature, the power of family and rising above challenges.

Hannah Weatherford, a self-employed photographer, enjoys the outdoors. She teaches photography to young people, helping them creatively express themselves.

Cynthia Brix promotes healing internationally between men and women over sexual issues and taboos. She works with the interfaith Satyana Institute—bringing women and men together to confront gender injustice.

Martha Murphy started singing and acting as a child growing up in Dallas, TX. She created the Whidbey Children’s Theater 35 years ago as a way for Whidbey’s kids to learn the magic of theater.

WOW! Stories are put online as soon as processing allows. Individual videos are produced for this event by WhidbeyTV/Whidbey Telecom, you can view videos from 2015 and previous years here:  https://www.youtube.com/user/WhidbeyWOWStories/videos?shelf_id=0&sort=dd&view=0