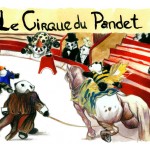 The idea is you don’t have to give much, but if everybody gives something, it all comes together to fund a worthwhile project.

With 158 backers pledging $12,863 of $15,000 goal and 10 days to go, Island Shakespeare Festival’s dream of erecting a circus tent named “Henry” in Langley, and giving the company a physical home, is close to being realized. But the “Bard Under the Big Top” Kickstarter campaign still needs backers.

After three seasons performing in the woods near Chinook, director Rose Woods and her merry band of players, will present “Much Ado About Nothing” from Aug. 3 to Sept. 15 its new circus tent home, allowing the company to continue its tradition of presenting free, community-theater every summer. The circus tent is a genuine, custom-built, period-style tent made by the oldest tent-making company in the country, Armbruster Tents. The Kickstarter will help them to purchase the tent and erect it in the center of the field behind Langley Middle School near downtown, where it will be accessible to foot traffic and on a bus-line connecting to the Clinton-Mukilteo ferry.

The tent will also allow ISF to provide an educational arm of the company to offer a series of classical theater training classes in partnership with the school district.

As with most Kickstarter campaigns, there are a number of sweet deals offered to those who pledge at various levels, including a night for two at the internationally renowned Inn at Langley and a meal at its award-winning restaurant. That’s for a higher-level pledge of $2500, which would put the “Bard Under the Big Top” over the top.  But there are plenty of cool prizes at the moderate levels, too.

Check out the project and pledge prizes here. The deadline to pledge is July 11.

(Pictured at top, Anne Belov’s “Bears Under the Big Top,” which will appear on the tote bag prize for pledgers.)