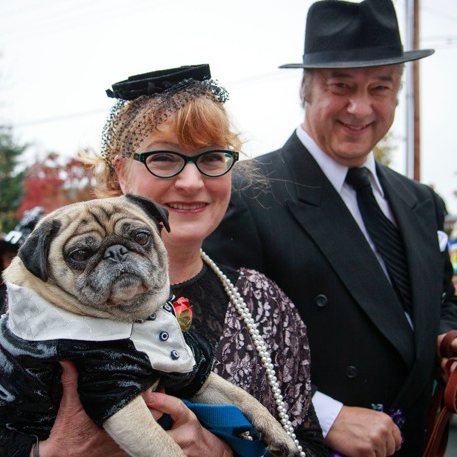 The 10th Annual Mutt Strut on Saturday Oct. 24 featured over 50 costumed critters and a party atmosphere that even a spate of showers could not dampen.

Dressed as bumble bees, little dogs Pixie and Pisco—along with their similarly bee-decked owners Julie Lundstad and Salley Westcott—”swarmed down from Oak Harbor,” as Lundstad put it, “to support local Whidbey Island activities for dogs.”

There was a four-legged Seahawks cheerleader and a scary (well, not really) spider dog, along with a pirate dog, a doggie hula dancer, dogs in hats and boots and capes and a number of dogs with wings. As many as 25 different breeds were represented, along with lovable mutts like Paige, an adoptable dog from WAIF.

Paige, a friendly, adoptable dog from WAIF, enjoyed her chance to socialize with other pups and people.

Two Bernese Mountain dogs (a mother and daughter) came with their owners Linda Sue and Ed Schoenharl as a band of gypsies. Mother dog Chloe pulled a pretty little gypsy wagon as her daughter Lisle followed. Linda Sue said it was a chance to demonstrate how the breed is used to pull wagons in Europe.

Parade leader and emcee Jim Freeman (in the orange and red headpiece) was outpaced by some parade participants, including Frida Kahlo (foreground) with her signature unibrow.

“This could be the biggest year we ever had!” noted animated event host Jim Freeman, who led the official Mutt Strut parade around the Bayview Garden Center, Farmers Market, and shops at Bayview Corner. During the parade, unofficial musical accompaniment was provided by fiddler Toni Talia Marcus, while her dog Tashi, a Chinese Crested/terrier mix walked by Ivan Neaigus, “sang” along.

It was easy to see why Spinnaker Gale won the “Best Trick” prize.

All participants then got to show off their costumes and various tricks to the appreciation of the crowd and their fellow canines. Prizes were awarded for Best Dog Costume, Best Celebrity Dog, Best Trick, and Best Dog/Owner Costume Combo.

As if not exciting enough already, the Mutt Strut was part of the larger annual Apple Day activities, which included the chance to sample 50 varieties of apples and watch fresh cider being pressed. The annual fun-filled tradition is sponsored by Bayview Farm and Garden, Bayview Farmers Market and Goosefoot, and it’s always free.

Barbara Moran (msbmoran.com) is a college writing instructor and veteran journalist focusing on animals and nature.

Annie Horton tasted one of 50 apple varieties provided at the Apple Day part of the event.

Macie Vanderwerfhorst came with a handmade surfboard and her “killer shark” Cinnamon.

Buddy, the pug, really “put on the dog” in his formalwear, along with his people Gail Liston and Brian Plebanek, and his golden retriever pal Koa—who was too big to pick up (also, image at top).

Betsy Munson showed her dog Maynard on four legs and on her shirt.

Both canine and human participants looked on in anticipation during the judging ceremony.