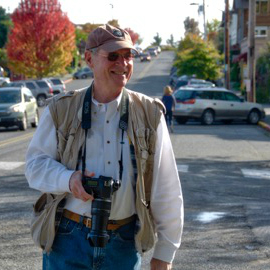 When David Welton was growing up in California’s San Gabriel Valley, his grandmother gave him a camera for his eighth birthday. The young man took to photography right away, even going so far as to save up for his own darkroom set. “It could have been a career path,” Welton said. But fate (and his family – who encouraged academics and more “professional” endeavors) had other plans, and he became a cardiologist.

Now, having retired from his medical practice and moved to Whidbey Island, Welton is able to fully embrace his calling as an artist. His photography has been seen in and around many Whidbey Island locations, including right here on the pages of Whidbey Life Magazine.

“When we first started, it was David who gave Whidbey Life Magazine a visual voice with his beautiful photography,” said publisher Sue Taves. “Whatever is happening on the island, you’ll see David there with his ball cap and camera, and it’s a joy to see the many community moments he captures. His passion for photography shines through and his exuberance is contagious. David is a great example of someone who has tapped into a well of creative passion that keeps expanding, and we’re lucky to have him in our community.”

David Welton poses next to one of his photos on the SeaTac Airport Shuttle. (Photo by Marsha Morgan)

Welton’s work has been featured in private collections, news publications (including The South Whidbey Record) and in numerous art shows and galleries. It now rolls up and down Seattle’s I-405 corridor: the SeaTac Airport Shuttle, which carries islanders directly to and from SeaTac International Airport, is currently wrapped in a colorful display featuring photographs of the town of Langley. Three of the shuttle photos were taken by Welton. (The other artists are Whidbey residents Michael Stadler and Debra Campbell.)

His current project takes him back to his California past. In the early 1980s, after taking a class with one of his photography heroes (noted street photographer Joel Meyerowitz), Welton headed to the Santa Barbara beach and began snapping “street” photos of his own. “Santa Barbara and the California Coastline” had a public showing and a newspaper write-up and then was mothballed by Welton, who had a very busy medical practice at the time.

Welton’s retirement, however, has allowed him to revisit the photos, organizing and scanning the negatives and converting them to digital format. Now some 30 years old, the series is a time-capsule of a bygone era featuring carnivals, laughing children, beach bodies, and more. Welton has plans to donate the images to the Santa Barbara Historical Society.

Of all of the different possible styles, Welton says he enjoys documentary photography best. “Fine art and abstract stuff has never really interested me,” he said. “I like photographing people.” Whidbey Island has provided plenty of interesting subjects. “The community is very tolerant of eccentricities, which makes for some great photo-ops,” he continues. “I just really get a thrill about capturing a moment or an emotion and getting it all distilled onto one page where people can look at it.”

“When people tell me photography isn’t art, I don’t argue with them,” said Welton. “But they’re wrong. My camera is my paintbrush. I paint with light. To be a good photographer, you need to learn how to use your tool. In the days of darkroom photography, you had to pick your film. You had to expose it. You had to develop it. Digital photography is no different. It’s just using digits instead of chemicals.”

“Inner Child” – A young girl at the fair. (Photo by David Welton)

When speaking of his Whidbey photography goals, Welton aims high: “I’m going to have the same documentation of this community that I have from Santa Barbara. After I die, 100 years from now, my photographs are going to be very important.”

Deanno the Clown in a Whidbey ferry cafeteria. (Photo by David Welton)

Welton credits an interesting source for his talent as a photographer: “I have one son. When he was growing up I gave him a Polaroid camera. After grad school he took to photography and is now recognized as one of the best destination wedding photographers in the world. His name is Nathan Welton. He’s way better than I am. So, I like to say I get [my talent] from him.”

Looking back on the route he took to where he is now and the choice to pursue medicine, Welton is sanguine: “I do not regret my career path; it was a good choice. I am, however, very happy to have a second chance at another option after 44 years and retirement at age 66. Life is good. It’s perfect.”

Leslie Irish Evans is a podcast host, Huffington Post blogger, and the author of Peeling Mom Off the Ceiling: Reclaiming Your Life From Your Kids. She lives in Langley, Wash. Learn more about her at http://www.leslieirishevans.com.