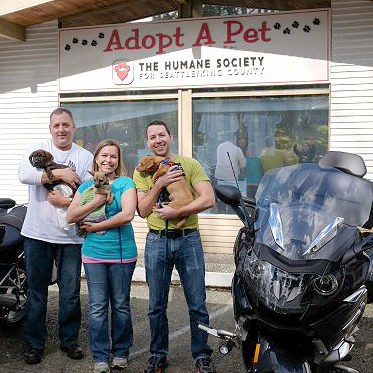 You’ve probably seen them. And if you haven’t seen them, you’ve heard them: A caravan of motorcycles roaring down State Route 525. While a large band of bikers might seem intimidating, there’s nothing to worry about here. You’re witnessing part of the Tulip Ride, and these folks aren’t here for trouble. More like flowers and puppies.

Every year hundreds of riders, most of them from Puget Sound but some from as far away as Florida and New Zealand, participate in this annual charity motorcycle ride that benefits the Seattle Humane Society. This year, on Saturday, April 16, riders will gather in the parking lot of Blazing Bagels in Redmond and ride to the RoozenGaarde Tulip Farm where they will enjoy a BBQ lunch and admission to the Tulip Fields.

The riders will be joined by celebrities Tricia Helfer and Katee Sackhoff (best known for their work as “Caprica 6” and “Starbuck” on television’s Battlestar Galactica). The actresses will be available for photographs before and during the ride. Participants who donate at the VIP “Road Captain” level will also enjoy a guided return ride down Whidbey Island and a catered dinner with the celebrity guests that evening.

The Tulip Ride began 16 ago as a way for several Microsoft employees to escape the rigors of launching the original Xbox. On a whim, about a dozen of them rode to the Skagit Valley Tulip festival, which occurs every April in Mount Vernon. It was such a great event that it became an annual tradition that grew into the enormous charity event it is today. “Motorcyclists are some of the most generous people in the world, so it’s natural that the Tulip Ride benefits a worthwhile cause like the Seattle Humane Society,” according to founder Jeff Henshaw.

Generous, indeed. Last year over 350 bikers and their passengers raised $50,000 for the Seattle Humane Society, for which the organization is extremely grateful. “With $50,000 raised last year, Tulip Ride is the biggest grassroots fundraiser for Seattle Humane,” said Aileen O’Connell, Special Events and Corporate Relations Director at Seattle Humane. “We’ve been partnering with the Tulip Ride organizers and riders for many years to raise critical funds for animals in our care. They’ve also introduced Seattle Humane to the local motorcycle community, which has a tremendous love for animals,” O’Connell added. “It’s been really fun for us.”

How experienced a rider does one need to be for this event? Henshaw said the event is open to “absolutely anybody, on any type of bike, from any skill level. All we ask is that your bike be a freeway-capable motorcycle or scooter.”

“I know [sometimes] people are intimidated,” Henshaw continued. “But the Tulip Ride ends up being one of the best rides for a new rider. They’re surrounded by friendly faces and people who are willing to help them get up to the tulip fields safely. It’s an easy route. It’s not a fast ride. We mostly take back roads and we take them very leisurely.”

Tulip Riders’ motorcycles lined up in the ferry on the way home. Motorcycles are allowed to proceed to the beginning of the line of cars waiting for the ferry and they enter the ship before other vehicles. (photo by Jeff Henshaw)

When asked about the Whidbey Island add-on feature of the event, the enthusiastic and energetic Henshaw became even more so: “Whidbey is an amazing motorcycle route because it features slow, winding roads through rural scenes. We enjoy island farms, stretches along the Puget Sound waterfront and a ride aboard the Washington State ferries before returning to the mainland. It’s hard to imagine motorcycling getting much better than this.”

And what about the future? With 15 trips already under its belt, where does he see the Tulip Ride in another five years? “Every year the ride has grown in ways that surprise us,” Henshaw said. “I would be thrilled to see us continue our growth, both in numbers of people who participate and in the funds that we raise. If those are both on a positive vector, I couldn’t be happier. To me, the most important thing we can do is get more people riding and giving back to their community.”

For more information about the Tulip Ride or to register, visit http://tulipride.org/.

Leslie Irish Evans is a podcast host, Huffington Post blogger, and the author of “Peeling Mom Off the Ceiling: Reclaiming Your Life From Your Kids.” She lives in Langley. Learn more about her at http://www.leslieirishevans.com.