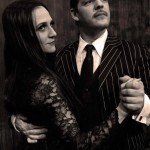 Beyond the Crypt: Lani Brockman Directs ‘The Addams Family: A Musical’

“They’re creepy and they’re kooky,
Mysterious and spooky,
They’re all together ooky,
The Addams Family.”

The cartoons focused primarily on the glamorous matriarch, Morticia, and her husband, Gomez, and featured their children, Wednesday and Pugsley, as well as Uncle Fester, Grandma and their butler, Lurch. What distinguished the family was their love of the macabre.

In 1964, The Addams Family was developed into a live-action television series for ABC, shot in black and white. Caroline Thompson and Larry Wilson wrote a feature-length film in 1991 that featured Angelica Huston as Morticia, Raúl Juliá as Gomez and Christopher Lloyd as Uncle Fester.

Composer and lyricist Andrew Lippa began developing a musical inspired by The Addams Family in 2007. It premiered on Broadway in 2010, starring Bebe Neuwirth as Morticia and Nathan Lane as Gomez. The plot of the musical centers on Wednesday, who has just turned 18 and has fallen in love with a “normal” young man. The ensemble is comprised of ghosts of the Addams Family’s ancestors, who are banned from returning to their crypt unless they help Wednesday and her new boyfriend.

When the rights became available for non-professional performance, Lani Brockman, the Founding Artistic Director of Studio East in Kirkland, secured them for her students. She directed the musical at Studio East in March of this year.

Starting with one theater program for teens in 1992, Studio East has become one of the largest children’s theater training programs in the Seattle area. Today, between the Studio’s camps and classes and its professional, adult touring arm, StoryBook Theater, Studio East serves over 70,000 people annually.

Brockman said she was drawn to the dark, silly humor of the musical. When she was younger, she enjoyed the television series, particularly Cousin It and Morticia’s dry sense of humor.

Finding a passion for storytelling at an early age, Brockman wrote, directed and acted in fractured versions of fairy tales, inviting neighbors to be the audience. Her talents blossomed into a life-long passion for training youth actors, which inspired her to found Studio East.

“I believe that youth are capable of doing just about anything if given support, parameters, tools and constructive criticism,” she said emphatically. “I had that experience as a teen and became passionate about creating a place where other young people might have that opportunity.”

Jennifer Bondelid (Morticia) gets ready in the dressing room. (photo by David Welton)

No stranger to Whidbey Island, Brockman has directed four shows at Whidbey Children’s Theater over the last 10 years: two productions of “Quilters,” “I Never Saw Another Butterfly” and “Last Exit.” She was presented with the opportunity to direct “The Addams Family” again this December at Whidbey Island Center for the Arts.

Some of her students who played leading roles in the Studio East production have joined the cast of the Whidbey Island Center for the Arts production. The young actors often carpool with Brockman, running lines and singing music from the show in her car.

Erica Major, who played Grandma at Studio East, portrays Wednesday Addams in this production. She has worked with Brockman for three years.

“Lani is absolutely wonderful to work with, “ Major said. “She is incredibly encouraging and gives you space to learn your character, but provides enough support so that you challenge yourself.”

Brockman’s students go on to work with Seattle theatres. John Han, who played Uncle Fester in the Studio East production, is a soldier in the ensemble and is slated to play Mr. Twimble and Wally Womper in 5th Avenue’s upcoming Rising Star production of “How to Succeed in Business without Really Trying.”

“Lani encourages you to go out and pursue your passions professionally,” Han said. “Studio East not only provides a safe environment for students to learn, but also to express yourself creatively without judgment.”

Brockman is excited to share this show with Whidbey audiences. She believes that audiences will delight in the fun, feel-good nature of the musical.

“This is a really complex show with moving walls that represent different locations, both inside the Addams mansion as well as outside in Central Park. The ancestors move them from location to location and these actors need to know their stuff!” Brockman said, giving praise. “I am amazed at the professionalism this cast has shown.”

“The Addams Family: A Musical” opens Friday, Dec. 4 through Sunday, Dec. 19 at Whidbey Island Center for the Arts in Langley. For more info and tickets, go to http://www.wicaonline.org/events-calendar-view/2015/12/4/the-addams-family

Katie Woodzick works at Hedgebrook as an External Relations Manager. She is also an actor and director who can be seen on local stages and the host of the Theatrical Mustang podcast: theatricalmustang.podbean.com. Next up: Alice in “The Addams Family: A Musical.”