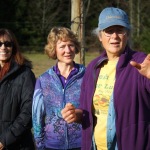 The land surrounding our local schools has lately resounded with several big wHOOPs of joy.

Fresh lettuce growing in the hoophouse (photo by David Welton)

A big wHOOP was heard when volunteers finished constructing the 960-square-foot hoophouse that shelters vegetables growing through the four seasons at the school farm adjacent to the South Whidbey Elementary School.

A big wHOOP was heard when students from the school first caught sight of the gleaming structure on the fringes of their playground.

Another big wHOOP was heard this week when islanders gathered to celebrate the generosity of the organization that funded the hoophouse (the Whidbey Island Garden Tour) and the dozens of volunteers who assembled it.

Since the creation of the half-acre School Farm, wHOOPs have become frequent here on this stretch of Maxwelton Road.

More than a few of the wHOOPs come from kids gathered together for “garden recess,” an option that students can choose as an alternative to regular recess.

“I like gardening because it gives me a chance to experience nature,” commented third-grader Rylie as she excavated a cavity in one of the garden beds intended for overwintering potatoes. “It’s fun to use a trowel. I know how to dig dirt and not have it fall back in the hole.”

Kids naturally appreciate the pleasures of dirt and second-grader Ava is no exception. She doesn’t shy away from things that wiggle and crawl. “I like everything about gardening, even worms, spiders, snails and snakes.”

On a nearby picnic table, second-grader Kristian clipped stringy roots from large, recently-harvested potatoes. “I like digging, helping the earth. I like being outside in all weather. My favorite vegetable is potatoes.” Surrounded by potatoes—recently dug, sorted by size, some ready to cook and some ready to bury—Kristian was in his element.

Garden coordinator Cary Peterson—“Miss Cary” as she’s known to the children—is never short of wHOOPs. A background in ecology, an interest in healing, years of gardening experience and boundless enthusiasm for building community have made Peterson the driving force behind the school farm. “We’re all the same age as we experience discovery, wonder, excitement, delight. I’m at the second-grade level myself. I run around and wave my hands a lot,” said Peterson as she led students toward the mulch pile to gather hay for the potato patch.

Although garden recess may look like pure fun and fresh-air exercise, these small gardeners are learning plenty of lessons. Peterson coordinates closely with classroom teachers to integrate outdoor lessons with indoor learning, ranging from subjects like biology, math and earth sciences to life skills like planning, cooperation and teamwork. Classroom teachers inform Peterson about developmental goals so that she can tailor outdoor activities accordingly. “I consult with teachers to see what concepts they plan to teach—energy cycles, compare and contrast, decomposition, bugs—and then reinforce those concepts in the garden.” Once the lessons have been prepared, Peterson implements them at garden recess and at classes held at the school farm.

“Last season I learned that dried peas are actually seeds. I kept some of the seeds to plant next season,” boasted third-grade student Mimi as she worked elbow to elbow with her classmates separating small potatoes from large. “These little potatoes are the seeds for our next crop.”

As intent as they were on sorting potatoes, the students produced a few wHOOPs as they spotted hidden faces in the knobby surfaces of the tubers, demonstrating once again that the natural world—from clouds above to potatoes below—develops the imagination.

Principal Jeff Cravey added a wHOOP of his own as he observed the digging and sorting. “First-grade teacher Debra Davies wrote a grant for garden gloves and trowels to use at the School Farm. The kids are eager to participate in garden recess. And, best of all, the kids are excited to see food they’ve grown served in their cafeteria.” Currently, 300 of the 500 students are involved in the garden-based curriculum taught in classes at the School Farm. Cravey expects that within three years, kindergarten through grade 12 will be involved.

How did the South Whidbey School District come to make gardening a part of the primary school curriculum? According to Superintendent Jo Moccia, Whidbey Island’s high standards for good food were pivotal. “The school district did a lot to provide healthy options for kids long before it was required by law. We took out soda machines and changed menus. The garden became possible because of a few teachers who wanted to integrate it into the curriculum…along with the perseverance, knowledge and skill of Cary Peterson—and her ability to forge partnerships.”

Thanks to Peterson’s inclination to “think in ecosystems,” four other organizations are partnered with the school district to ensure the sustainability of the South Whidbey School District Garden Program: Whidbey Island Nourishes (WIN), Good Cheer Food Bank, the Whidbey Institute and the Goosefoot Community Fund.

Founder Mary Fisher felt WIN’s mission to make sure kids have nutritious food and to educate families about nutrition aligned closely with the goals of the Garden Program and saw an opportunity for reciprocity. “The produce raised by the school kids will go into WIN backpack lunches. WIN will give money to the school district to hire a garden educator.” Volunteers from WIN also helped construct the hoop house and fence the garden.

According to Executive Director Kathy McCabe, “Good Cheer is more than just a food bank; we want families to learn to eat healthy and well.” Although Good Cheer’s relationship with the school district dates back to 2007 when Good Cheer sponsored a (still-thriving) garden at the middle school, McCabe has seen momentum accelerate as partnerships have multiplied. “Local farmers donate more food. Good Cheer hired two of the former garden apprentices to manage our garden at the food bank. A teacher at the high school runs an agriculture class behind the building and provided fresh food to Good Cheer this fall.” Additionally, McCabe believes that gardening activities offer certain children the opportunity to excel. “Some kids who fail to shine in the classroom rise to leadership positions in the garden,” she observed.

The third partner in the school district garden project is the Whidbey Institute, which teaches techniques of small-scale food production and leadership skills in community gardening. Extensive outreach efforts coupled with stipends and home-stays have attracted motivated individuals seeking careers in sustainable gardening. Focused on strengthening community-driven food systems, the Whidbey Institute contributed much needed labor to the school farm during the construction phase. “The Whidbey Institute will continue to maintain and develop the Garden Leadership program for the benefit of all,” said Executive Director Jerry Millhon.

Goosefoot exists to build a sense of community, preserve rural traditions, enhance local commerce and create a sustainable future for South Whidbey Island. After five years of operation, the Goose Community Grocery Store is turning enough of a profit to give back to the community. Executive Director Sandy Whiting felt a partnership with the school district was a natural fit. “The School Farm made sense in light of our mission, which is to encourage Whidbey Island food sustainability.” In October, Goosefoot launched a fundraising campaign with a dollar-for-dollar match; once $15,000 has been raised, Goosefoot plans to donate another $15,000.

One partnership—perhaps the most critical of all—had to be forged with Chartwells, the food service corporation that manages the South Whidbey school cafeterias along with hundreds of other schools across the nation. Although the bureaucratic hurdle to getting school-grown produce into the cafeteria was huge, Cary Peterson’s persistence eventually paid off; in 2013 the corporation agreed to buy produce from the garden program for all cafeterias district wide.

While third-grader Marina doesn’t know much about bureaucratic hurdles or fundraising goals, she does know about the superiority of school-grown food. “The carrots that come from our ground are way sweeter than regular carrots!”

When vegetables from the School Farm began showing up in the cafeteria, head cook Sandy Poolman saw increased enthusiasm at the salad bar. “Out of our student population of 500, nearly 200 eat cafeteria food, either breakfast, lunch, or both.”

Nutrition, freshness and flavor are priorities for the cafeteria staff. Their commitment to good nutrition has always been strong; in fact, even before just-picked produce began coming through the school doors, they cooked from scratch for the students and looked for ways to make vegetables and fruit appetizing to young eaters. Roasted carrots shaped like french fries. Carrots glazed with cinnamon. Is it any mystery that many of the gardeners-in-training cite carrots as their favorite vegetable?

Back at the potato patch, the kids spread the hay on the raised bed while “Miss Cary” explained the importance of mulch to protect the baby potatoes from freezing.

As the end of garden recess neared, some children cleaned up stray bits of hay, some gathered up shovels and trowels, some loaded harvested potatoes into a cardboard box destined for the Good Cheer Food Bank.

And that, it seems, is how community is built.

Isn’t that worth a big wHOOP?