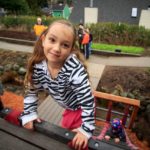 Practicing the Fine Art of Bricolage

Tom Lindsay, known to many as the Bubble Man, has another life, one of a bricoleur.

Lindsay likes using the French word to describe himself, which means a tinkerer or someone who makes things from available material. His latest bricolage is an outdoor playscape for children of the Fifth Street Commons in Langley, where Lindsay lives.

Ideas arise in Lindsay as easily as most of us breathe, and the playscape he imagined, designed, and built with fellow commoners, is a place of wood, metal, and quirky functional castoffs built on a peninsula that’s surrounded by the community rain garden. Lindsay hopes it will be the place for children to let their imagination roam by day and adults to toast each other with spirits by night.

Tom Lindsay celebrates the completion of the play structure. The metal rings that support the tower walls behind him are from old cable reels donated by Whidbey Telecom. (Photo by David Welton)

The basis for the playscape was a backyard project created by a Renton firefighter for his grandchildren. Its central component was a silo that had been turned upside down and converted into rocket ship. Lindsay found it on Craig’s List and, along with fellow commoners, disassembled it and brought it home to Whidbey Island.

The complete playscape. Note the prow of the old Bush Point Resort row boat on the bridge (Photo by Ross Chapin)

Using the components of one play structure as the basis for another was a collaborative effort, Lindsay says, and adds, “I must mention the enormous contribution that Robert Scully made. He’s an associate member of the Fifth Street Commons who lives in SeaTac. He spent three full weekends welding much of the metal structure together. The Bridge Tower would not have been possible without his pro-bono help, and I’d love to express our gratitude to him.”

Imagine, if you will, a section of Langley’s Castle Park play structure, cloned and transplanted to this intentional community and given a total makeover with Lindsay’s treasures. People can drive a 1940s-era Dodge truck using a vintage Chevrolet steering wheel, and opposite that, they can use an antique ship’s wheel to pilot an original rental row boat that was used at Bush Point Resort back in the ‘60s. An antique fire bucket on a Chinese windlass will soon allow treasures to be cranked up to the second story from below without crashing back down, and old fire hoses become vertical blinds that create a secret hideout in a tower made from metal cable spools donated by Whidbey Telecom. This is what bricolage is all about.

Teresa Hess drives the Dodge. Behind her is the ship’s wheel and old row boat from Bush Point Resort. The roof of the tower above Hess’ head is the top of a grain silo. (Photo by David Welton)

The end result, still in the making, is a design pleasing to the eye. “All of my aesthetics are checked with a neighbor who stares down at the structure,” Lindsay says. “The devil is in the details.”

Lindsay’s playful design sense comes from his years of creating children’s exhibits at museums, notably his work as director of exhibits at the Children’s Discovery Museum in San Jose, California, and most recently at the Hands On Children’s Museum in Olympia, Washington.

Combining a kids’ sense of play with design engineering expertise earned at Stanford, Lindsay enjoys scrounging for treasures. He’s found a goldmine at Island Recycling in Freeland, and excitedly shows cast-off building materials, such as metal support beams, that he found there and used in the playscape.

The Fifth Street Commons began as the Northwind Apartments in 1996 and is made up of 16 one- and two-bedroom units. It was purchased in 2012 and converted into co-housing built on the intention stated on the association’s website: “Rather than merely seeking shelter, we come to be part of caring and sharing community.” There’s a sense of can-do-ness and right feeling there.

“People are awesome here,” Lindsay said, coming out of the cold on a mid-January afternoon into the Common House, wearing a Dijon-mustard-colored Carhartt thermal coverall. “What works here are the different skills and interests people have. After moving here, I got excited about building something for the kids.

Cooper Zachritz and Fiona Hess on the slide that came from the original salvaged play structure. The black disk that the top of the slide is mounted to is one side of a cable spool donated by Whidbey Telecom. (Photo by David Welton)

Teresa Hess, who sees the playscape outside the sliding glass door of her living room, says, “The playscape is a work of art! Tom used a variety of materials, and each element (boat, car, fire hose, silo, etc.) has a story behind it — where it came from, what it was used for previously, who helped transform it to be used on the playscape — and all the elements combine to make a unique, beautiful, and imaginative creation. And, most importantly: the kids love it! The playscape is a fantastic contribution to our community.”

Gina Diamond takes advantage of features that were built in for use by the community’s grown-ups. (Photo by David Welton)

Fifth Street Commons children were first invited to play on the playscape at 2:30 on Sunday, January 22. That evening, Teresa’s husband Cory Hess, sent an email message to the entire Commons community, saying that their 10-year-old daughter Rose and her 12-year-old friend played on the structure for hours in the cold and dark.

Rose’s 5-year-old sister Fiona shares her enthusiasm. When she climbed the firehose ladder for the first time, and then went down the slide, she headed back to the ladder and said, “I’m going to be doing this a LOT.”

Roul McDowell reaches for a toy grader that Tom Lindsay played with as a child. (David Welton)