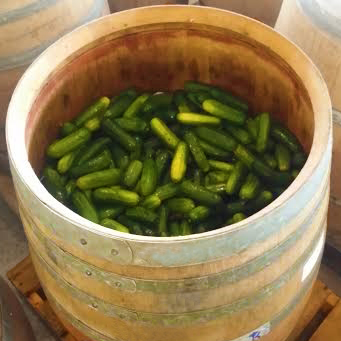 It’s not accurate, perhaps, to describe the aroma of aging foods as one that is “delicious.” But that musty scent I detect when I walk into a wine cellar or a cheese cave smells—to me—nostalgic and good.

Memories of my grandmother’s basement, which contained all her canning equipment, remind me of that smell. The stuffy fragrances enter through my nose, travel through neurons and say to my brain: FOOD!

Those same bouquets of aromas seep into my senses as I enter the fermentation room (a.k.a. the “Pickle Hatchery”) at Britt’s Pickles. I recognize the same damp, oak-wine-barrel smell, only this time the room is filled with aging vegetables. Another aroma I notice is the sour “pop” one gets when bursting open a bag of salt and vinegar chips.

What I smell is a process called “wild fermentation.”

What I see are cases of cucumbers waiting to mature into pickles. I’m told that anywhere between 6,000 and 8,000 pounds of raw vegetables come in each week to be turned into pickles, kimchi and sauerkraut.

I’m meeting with owner Britt Eustis and Trap Landry, the company’s CFO (Chief Fermentation Officer); they’re taking me on a tour through the artistic and scientific process of wild fermentation.

This method of food preservation has been around for thousands of years; Eustis became focused on it while on a trip to Japan in the ’80s. He was, he said, fascinated with the science, wisdom and tradition that he saw.

Eustis, who has worked in the natural and organic food industry since the ’70s, has experimented with different ferments for years and has become a preservationist extraordinaire. He opened his own “ferments” business in Clinton just over four years ago, creating fermented foods and selling them in his Pike Place Market shop and more than 50 stores locally and throughout the U.S.

Eustis’ search for water for his Pickle Hatchery led him to Whidbey Island. “The water was the draw, because it has so much to do with what [is created],” said Landry. He calls the water “the DNA” of the pickles.

Other special measures taken by Eustis include his use of oak barrels for fermentation, which impart tannin and lower the pH in the brine, creating a safer environment and extraordinary flavor. Additionally, the chefs at Britt’s go directly to local farms during the growing season to obtain the best ingredients and to experiment with seasonal ferments.

The fermentation masters at Britt’s Pickles are chefs—artists who work with vegetables as their medium. Each batch of varying vegetables arrives at the shop with differing requirements that necessitate unique, and practiced, attention. Pickles and other ferments are constantly tasted for flavor and texture and the chefs’ palates or taste buds tell them when the product is perfect for consumption. This personal relationship with each small batch means that when one purchases the product, it will be delicious.

According to Landry, the tranquil island mentality, untreated island water and the access to local farmers make Whidbey Island the perfect place for Britt’s Pickles to create their products.

The process of wild fermentation creates a safe, anaerobic environment where bad bacteria cannot survive and good, probiotic bacteria called Lactic Acid Bacteria (LAB) thrive. LAB are known to be extremely good for digestion and promotion of overall good health. In this method of preservation, the vegetables are never heated so the nutrients stay intact; the freshest, sharpest flavor and crunchy textures are maintained.

Respect for ancient foods and traditions continue today all around the world. Eustis and his team are creating their own fermentation traditions right here on Whidbey with an immense reverence for the craft and value for the different cultures that first created these foods. Whether you’re digging into a jar of pickles for your burger or serving kraut with an old family recipe, trying out a new favorite kimchi on a sandwich or investigating the Korean meal “bibimbap,” you’re devouring foods of ancient rituals, science and art.

Some people can find a place for ferments at any meal. Others may stare, perplexed, looking at the words on Britt’s jars and wondering: “What do I do with this?”

If this is you, follow the advice of CFO Trap, who advises: “Just get a fork and dig in.”

Lis David is new to Whidbey Island and comes with a deep interest in eating her way from one end to the other. She has been working in food for the past 14 years in Washington D.C., Chicago and Cork, Ireland, in restaurants, farms and a distribution center for local food.