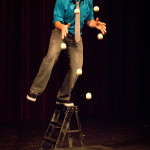 The whole family will be amazed by Bronkar Lee, the world’s only rhythmic juggling beatboxer, who will bring his blend of music, comedy, skill and rhythmic energy to Whidbey Island Center for the Arts (WICA) at 7:30 p.m. on Friday, April 25.

As part of WICA’s Family Series,  Lee will present a school matinee to the 6th and 7th grade classes of South Whidbey School District on the morning of April 25.

Lee describes himself as “a hyperactive kid with ADHD” who through “practice, persistence and patience” channeled his high energy into a unique act combining music, juggling, beat boxing and a positive message for kids.

Deana Duncan, WICA’s Programming/Education Director said, “The Family Series is one of the longest running Arts in Education programs in the South Whidbey School District and we’re excited to continue the tradition with Bronkar on April 25. We met Bronkar at the 2012 Northwest Booking Conference and found his work highly interactive and absolutely mesmerizing. As a mom of two students I knew that this performer was sharing more than entertainment; he was giving us a glimpse into his process and life.”