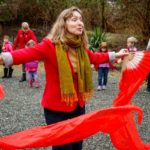 These days, deciding whether to smile on our brother or to turn away seems more difficult. At the Northwest Language and Cultural Center in Langley, kindergarteners are learning to smile on their brothers and sisters, even though they may look different or do things another way.

On a very rainy Thursday in Langley last week, five- and six-year-olds were learning simple Chinese words, such as ni hao for hello, laoshi for teacher, and xiexie for thank you. They sampled comforting Chinese rice porridge made by a kindly Chinese chef and learned to make sticky rice balls and lanterns, celebrating Lunar New Year. The Year of the Rooster began Jan. 28.

Students learn how to say simple Chinese words such as hello, teacher, and thank you. (Photo by David Welton)

The idea of bridging cultures has found form through Josette Hendrix, founder and director of the Northwest Language and Cultural Center. The guesthouse and center have celebrated viva la difference for the past 20 years, hosting families from other countries, teaching English immersion and culture, and an appreciation of the natural beauty of Whidbey Island. During the past two years, the center has opened its doors via the Global Culture Experience program to Langley Middle School students and, as of last September, to kindergartners from South Whidbey Elementary School.

“The concept, at its core idea, is to present, in face-to-face settings, a way that allows students to have a primary experience with a native culture,” Hendrix said on a bustling day when nearly 80 kindergartners, along with parent volunteers and teachers, rotated between Chinese culture games, crafts, movement, music, storytelling, and cooking. “The students can form a relationship to others and understand each other as human beings.”

To that end, Justine Boren, a kindergartner, said, that her favorite class was, “Cooking!”

It’s easy to understand Boren’s enthusiasm when meeting Andrei Liu, who drives from Anacortes to cook for the little people and teaches them how to make comfort food from Northern China. Liu’s warmth and heartfelt cooking can permeate his rice, spinach, mushroom, ginger, and tofu porridge. He taught students how to make sticky rice balls in celebration of the new year.

“This is very simple and healthy and makes the stomach feel good,” Liu said, his voice flavored with a Chinese accent. “Things [about teaching children to cook] move me. One of the kids hugged me, a natural love. They ask me if they can have more, and some parents use my recipes. I believe cooking is an art. If you rush, rush, food is no good.”

Liu, who manages an art gallery in Anacortes, said he once worked as a cook in San Francisco restaurants. The porridge recipe is his mother’s, who is nearly 90 and healthy, due, in part, to her cooking.

South Whidbey kindergartners learn how to make sticky rice balls in celebration of the Year of the Rooster. (Photo by David Welton)

Suzanne Wong-Scollon, who is of Chinese descent, moved to Whidbey Island a year ago, after visiting the island off and on over the past 50 years. On this Thursday morning, she played guitar for the kindergartners, leading them in a song written by Maria Ellis, a Russian-born teacher who helps Hendrix run the center. Around an inflated globe on the covered porch, the children sang Ellis’ Global Cultures song:

“We promote hands-on participation with native speakers, Ellis said. “I’m amazed at how quickly the kids pick up the accent and pronunciation. I speak five languages and cannot speak Chinese as well as these students can.”

“I think this is a great program,” Neff said. “The children get a lot of exposure to different cultures. It’s a lot of fun.”

After lunch, a regal CeCe Hier, originally from Bejing and now a resident of Maple Valley on the mainland, hosts a rambunctious group of kindergartners and teaches them about the traditions of Lunar New Year. She folded her hands together under her chin and said that is a Chinese version of a hug. Later, she showed students how the new year is celebrated with Chinese families. In the Chinese culture, lanterns with riddles on them are lit and float away in the night sky. There are gods to pray to for wealth in the coming year. There are sweet rice balls to make and eat.

“Today, we believe that people need to interact with each other much more, human to human, heart to heart,” Hendrix wrote in a Feb. 3 blog post for NWLACC. “Through such cultural exchanges, there can be greater understanding that other values and norms are as valid as our own, often containing sides to the truth that we may have lost or forgotten.”

With public schools’ funding deficits, the program is carried by NWLACC, which is seeking grants and donations to continue funding it. For more information, contact the Northwest Language and Cultural Center.