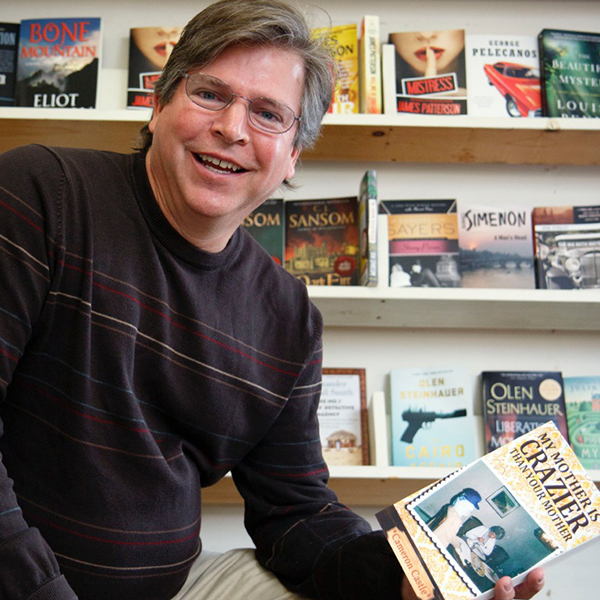 Cam Castle Says his Mother’s Crazier than Yours

In junior high school, Cameron Castle wrote a play about his mother. More than forty years later, he’s still describing her antics in his recently published “My Mother is Crazier than Your Mother.” His agent kept asking when the book would be ready. Castle replied, “How could it be finished? She’s still alive.”

Dorothy Castle (also known as Dorothy Dodo Dawn Judith Taylor Rose Castle Udovic) is 95 and definitely alive and well, living in a Redmond retirement community. She got to see the manuscript before it was printed and was pleased with most of it. As soon as she read the chapter about contributing to the untimely deaths of the kids’ pets, though, she called her son. “Trash! Pure fiction! What’s wrong with you? If you want to tell that story, I’ll write it.”

He explained he had no idea what taffeta was—or chenille—and added, “It’s fixed. I’ll change it. But what about the rest? You know, about our pets?”

“Oh, that. That was spot on. But, taffeta! You can’t print that.” He changed it.

The book describes his mother’s quirky behavior. One time he came home with a detention slip, but when she heard it was for laughing, she was relieved. “Oh, I thought you had done something terrible. No big deal.”

The next morning she gave him a note for his teacher taped to a full grocery bag. “I respect and support your decision,” she wrote, but it meant that he’d miss the bus and she wouldn’t be able to pick him up. “So I’ve sent with him his pajamas and toothbrush, because, if you keep him for detention, he will have to spend the night. Thank you. Dorothy Castle.”

He gave it to his teacher, who read the note and soon handed back the bag. “I guess you don’t need to serve your detention today. But I expect much better behavior from you going forward.” He promised.

How many mothers build an addition to their house (by themselves), deliver the babies from a dead guppy (by Cesarean section), move three times (without telling a son until the moving trucks arrive), dive into a condo pool fully dressed in front of a strict condo association board (then climb out, shake off some water and ask, “Is that against the rules?”) or return a used couch and get a refund (three years after buying it)?

Castle also paints the picture of a mother who looked for joy and happiness in every instance. Humor got her through many tough times. At 93, asked by a doctor, “To what do you attribute your great health?” she replied, “That’s easy. I am always happy.”

Her son Truman is 13 years older than his brother Cam, so he wasn’t home during much of the time covered by these tales. “I laughed out loud over some stories I hadn’t known before,” he said. “The stories that we remember, retell and live by really do define who we choose to be, and our view of life and the world. This book, in addition to being a hoot, says a lot about the power of stories.”

After reading Cam’s short stories and articles, his wife Laura encouraged him to leave his job as a restaurant supply rep and get serious about writing. It didn’t take him long to agree. He quickly quit the job and started working on material for this book. His sons Carter and Wilson were born soon after, providing humorous material about stay-at-home dads and Little Leaguers.

Cam Castle at Moonraker’s Books in Langley. You can find his book at bookstores across the island, Lind’s, Sno-Isle libraries and on Amazon Kindle. (photo by David Welton)

Members of his Freeland writing group have listened to many tales about his mother. As Susan Jensen puts it, “Cam doesn’t just read his writing, he performs it. As he developed ‘My Mother is Crazier than Your Mother’ in our writing group, we came to know his mother intimately, not only through Cam’s words, but as he performed his relationship with her. We howled at her antics and cried at the pathos. I’ve never met her, but I know her oh, so well. The book is a delight, and, of course, Cam always is.”

Another Whidbey author, Tom Trimbath, talks about “secret guilty pleasures and ulterior motives: showing up to the writer’s group just to hear a story about Cam’s mother, listen to his hilarious delivery, and watch him field questions because so many people are convinced he made it all up—unless they’ve met him and her. I do miss that dose of healthy humor. When’s the one-man show going to hit the road?”

Laura Castle describes her mother-in-law as “zany as the book describes, a real-life combination of Lucille Ball and Amelia Earhart. A pioneer of her time—a woman we can all look up to who lives each day to the fullest, could care less what others think about her, and is unapologetically 100% herself.” She describes her husband as, “the reason I constantly have a giggle bubbling in my throat, and why my boys dance in our kitchen. Thank you, Dorothy Castle.”

Keep your eyes out in the future for a book about Castle by one of his kids (Krissy, Mason, Max, Carter or Wilson). Title? “My Dad’s Crazier than Your Dad.”

Natalie Olsen is a fiber artist and writer who loves to laugh with (and at) her friend Cam. She met his mom at a party a couple years ago and still laughs about the conversation they had. About male horses…