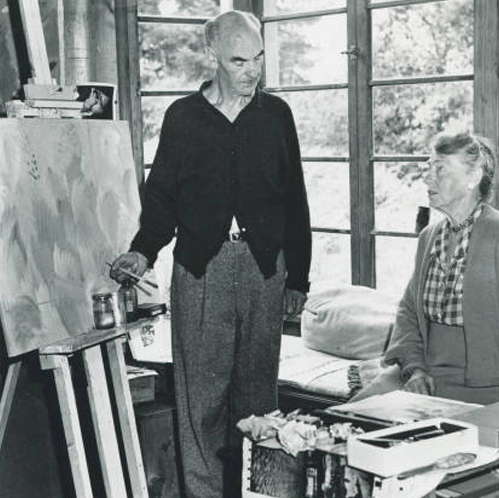 They called it Brackenwood. Until the Camffermans moved to Whidbey Island in 1915, it was known for potlatches, longhouses, lumber, and fishing — with a bit of lawlessness for flavor. By establishing Brackenwood, their art colony, on Whidbey, the identity of the island, and Langley in particular, changed. In a few years, two passionate people had as great an influence as hundreds had over decades.

The Camffermans weren’t the first artists on the island. Whidbey’s art history began with the local tribes, but too little of that is preserved or recorded. Even lumberjacks can work with fine tools, but again, little of that was saved. When Margaret and Peter moved to land near Langley in 1915, they were pioneers stepping into a disreputable frontier. South Whidbey’s residents were rough lumberjacks, fish processors, and determined farmers. Visitors came for the fishing, and occasionally for activities that weren’t allowed in Seattle, like gambling and fighting.

Peter and Margaret were established painters and etchers prior to their arrival. They met while studying at the Minnesota School of Fine Arts. Margaret trained at the New York School of Applied Arts and Design. Eventually, both of them traveled to Paris to study Cubism with Andre Lhote. They were called modernists and considered their paintings to be abstracts. But for the time, they were avant-garde, even among their colleagues.

Their connection to the island was probably a family one. The island certainly wasn’t a convenient choice. Margaret was the niece of Helen Coe, who was Langley’s first woman mayor and a neighbor of the Camffermans and the colony. Mayor Coe and an all-women council won their positions on the platform of physically, morally, and culturally cleaning up Langley. They helped create a more fertile environment for art and intellect. Margaret and Peter started life on the island by moving to a corner of Coe’s property, buying land, and building a house. Coe’s house was recognized as the intellectual center of the town. After her political career ended, she further emphasized culture by establishing the Langley library. The Camffermans established the arts center.

Being artists wasn’t enough. They became teachers, inviting artists from around the region and the nation. Eventually, Brackenwood had eight cabins and became established as an artist colony worthy of the long journey to Whidbey Island. Brackenwood was active through the forties, partly because of classes taught by the Camffermans, partly because of classes taught by other well-known artists, such as Alexander Archipenko, Kenneth Callahan, Morris Graves, Amedee Ozenfant, and Mark Tobey. While they were open to other avant-garde artists and art, the instruction also encouraged formal academic training.

Their reputation as pioneers in the art world wasn’t restricted to the island. Margaret was an early member of the Women Painters of Washington, and the two of them were part of Seattle’s Group of Twelve, an association of artists who were interested in modern art.

Together, their art was exhibited as part of the Public Works of Art Project during the Depression, at the Seattle Art Museum, the Golden Gate International Exhibition, San Francisco’s Art Museum, the Palace of the Legion of Honor, and in Smithsonian traveling exhibitions. Their works still occasionally come up for auction, and you can view several of Margaret’s works at the Langley library.

The Camffermans’ colony is gone, but their influence remains. Hundreds of local artists prove that through their work. Brackenwood Art Gallery honors them and Whidbey Life Magazine covers the art and culture they inspired.