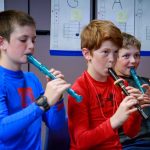 Which do you think is a better way to teach kids about music: having them listen to an orchestra concert or giving them an opportunity to perform with an orchestra? The folks at Carnegie Hall believe that giving kids an opportunity to play with professional-caliber musicians is so important that they created the “Link Up” program, and more than a thousand Whidbey Island third- through fifth-graders participated this year.

A few hard-working members of the Saratoga Orchestra brought the Link Up program to island schools. Larry Heidel, who plays trombone with the orchestra and is executive director of its board, became enamored with the program when he and his colleagues learned about its benefits four years ago. Since then, he and the orchestra’s board of directors have set about raising funds to buy recorders and get the program set up island-wide.

“We’re lucky to have a community that stepped up to help purchase recorders for the kids,” Heidel says. “Grants from the South Whidbey School Foundation, Island Thrift, and the Tulalip Tribes Charitable Funds also helped fund the recorder purchase and enabled us to produce two concerts for the students.”

Heidel adds, “We had to get buy-in from the schools and music teachers last fall and brought everyone together for a professional development workshop. We trained the music teachers on the material, including those from South Whidbey and Oak Harbor. We are only one of 90 participating orchestras who were selected to use this curriculum worldwide. It’s not meant to replace the existing music teacher’s program but enhance it. This year we did ‘The Orchestra Rocks,’ one of four programs offered by Carnegie Hall’s Weill Music Institute.”

Island students learned that rhythm is a universal element of music. They learned what timing is, how to create patterns of sound, and how important silence is. The program is organized in a way enables students to fully engage regardless of their skill level.

The Orchestra Rocks repertoire culminated in two performances last month. Performing in Oak Harbor and South Whidbey, the Saratoga Orchestra played to a full house of elementary school students who sang and played recorders with the orchestra during the Link Up theme song, “Come to Play,” and three other classical orchestra pieces.

Caleb Hunt tunes in to playing the recorder. (Photo by David Welton)

Anna Edwards, a conductor of the Saratoga Orchestra, introduced students to the strings, wind, brass, and percussion sections. Locals Karl Olsen (music minister at Trinity Lutheran Church), Eva Nelson (who starred and sang in “Into the Woods,” a performance at the Whidbey Playhouse earlier this year), and Mara Bush (a South Whidbey High School senior who took a first-place award in clarinet at a regional ensemble last February) acted as emcees and good-natured performers for songs such as Verdi’s “Anvil Chorus” from “Il Trovatore” and “Mars, the Bringer of War” from “The Planets” by Gustav Holst.

“Listen closely to how Holst uses repeating rhythms and find the patterns of music,” Olsen explained. During the performance of “Mars,” students viewed projections of their own planet-inspired art on a screen behind the orchestra.

Chris Harshman teaches band at South Whidbey High School and believes in the power of music. The bassoon player has taught thousands of students over the years, and his jazz bands have won national awards.

“The Link Up program is an exceptional opportunity for students to experience the performance of classical music as musicians in a professional orchestra,” Harshman says. “I enjoyed our students’ enthusiasm and excitement at the performance, and their pride of being a part of such great music-making. Most of all, I loved performing with these wonderful students. Music is at its best when it serves the community, and this was a very sweet collaboration of children and adults coming together in a joint effort to make great music. Bravo to our next generation of musicians!”

Students from the Calyx School also participated in the program and attended the May concert.

“The Link Up program was a welcome surprise addition to our nature- and arts-based curriculum this spring,” says Lisa Kois, creator of the school. “I was excited by what I read about the Carnegie Hall program, the opportunity for our kids to begin to learn an instrument, and to have a hands-on classical music experience with the Saratoga Orchestra. How cool is that? Learn to play the recorder and then go watch, learn from, and play with a professional orchestra. The entire experience was so positive for everyone, and the culminating concert was amazing. Our kids were very inspired. At the end of the concert, one of the students sitting next to me turned and asked, ‘Do we get to do this again next year?’ Another student dreamily walked up to me and reported, ‘I am all about music.’”

Frances Kenney teaches music at the Whidbey Island Waldorf School and plays oboe in the Saratoga Chamber Orchestra. She found that teaching the Link Up curriculum raised her students’ awareness for music.

“The materials from Carnegie Hall are well chosen and presented in an age-appropriate way,” Kenney says. “My students enjoyed the drama of ‘O Fortuna’ and especially enjoyed learning about the piece ‘Mars.’ I am so grateful to the Saratoga Orchestra for giving my students an opportunity right next door to see a professional live orchestra. There is nothing else that can come close to this experience, and I am sure it was inspiring to many budding musicians in the audience.”

Anna Edwards, a conductor with the Saratoga Orchestra, takes a bow following the Orchestra Rocks concert. (Photo by David Welton)

Holly Brown, music specialist at Broad View Elementary School in Oak Harbor says Link Up was enriching for both her students and herself.

“The students were exposed to classical music (some of which they would never have had the chance to hear/study) through the Orchestra Rocks curriculum, and were provided with engaging and fun composition activities, worksheets, and performance rubrics that went along with each song they performed,” says Brown.

Does Link Up make a difference in student interest in music?

“I believe it does,” Brown says. “Students were definitely excited to come to class to work on the Link Up music and learn about instruments and composers. Many students went above and beyond, practiced the music at home, and transferred it to other instruments they had at their house. One student said, ‘Mrs. Brown, I learned how to play (Orchestra Rocks songs) on the piano. Want to hear it?’ During this time, students also became more aware of the music that is used in movies, commercials, TV, and the radio, and were able to classify genres and reported back about what they sounded like. After performing with the orchestra and hearing the orchestra live, students definitely gained an appreciation and interest in classical music and were inspired to learn an orchestra or band instrument in fifth grade. This was an amazing opportunity for all involved, and I hope this program will continue in the Oak Harbor School District for many more years!”

Heidel says he was happy to be part of a program that brings music into children’s lives. “Music can be a lifelong experience, and I’d like to impress this fact on every student, whether they play an instrument, sing, or just become an educated listener.”

Kate Poss enjoyed her work as a library assistant at the Langley and Coupeville Libraries before retiring. She worked for three summers as a chef aboard a small Alaskan tour boat from 2008 to 2010. She was a newspaper reporter in Los Angeles for many years before moving to Whidbey Island where she likes cooking for new and old friends, hiking, reading great fiction, and writing her second novel with friend Fred Bixby.