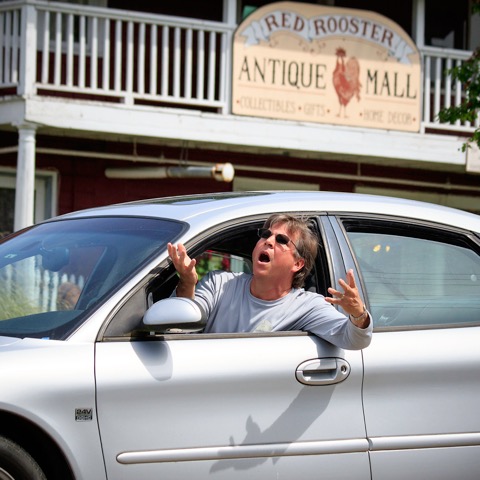 Castle on Whidbey || A Riddle by Cameron Castle

What happens at the four-way-stop in Freeland, Washington, when a Prius with a “Perform Random Acts of Kindness” bumper sticker, a 1984 Volvo station wagon and two random cars from Maple Ridge Retirement Home all arrive at the same time?

You go, no, you go. Life on the island. (Photo by David Welton)

Answer? NOTHING. Nothing happens.

The Prius driver, even if first on the scene, is saying, “No, you go.”

The Volvo driver is bent over searching on the floor of his car for his “Credence Clearwater Revival Greatest Hits” cassette tape.

And both of the Maple Ridge folks are trying to focus on anything farther away than the hood ornaments on the front of their large cars. (No offense)

Nobody is going anywhere.

And, if you are the second car in line, you ain’t goin’ nowhere neither.

That is because we live on Whidbey Island. A place where honking one’s horn is not only unacceptable, but also not even considered. Unheard of. Actually, unheard. I have never heard a car horn since moving to this island seven years ago.

My wife, Laura, and I grew up in Chicago. My best friend, Mase, used to drive around the city with one hand on the wheel and the other poised over the horn honker. He played that thing like a jazz keyboard player. His syncopated honking rhythm was a constant as he drove. Turning left in front of oncoming traffic, spinning the wheel franticly with only his left hand, he would be beeping manically with his right.

I asked him once why he did that. I asked, “With the regularity that you honk that horn, does it really make any difference?” He looked at me with an incredulous stare and replied, “Absolutely it makes a difference. It makes me feel better.”

When I am at that stop in Freeland, staring at the people bustling in and out of the post office, I want to honk my horn. Desperately. But I don’t. I can’t conceive of the reaction I might get. And if I am the third car, Heaven forbid, I look into the rear view mirror of car number two, and wonder, “Local?” There we sit.

There are times when I want to scream and wave my arms like someone who has just been pushed off a cliff. But I refrain. I refrain because the chances the driver in front of me will be, Sunday, sitting next to me at church, or, in 15 minutes, be in front of me at the grocery store line, or actually be my neighbor, is about 75%.

Asking for patience from above. (Photo by David Welton)

I was a territory salesman around Seattle for ten years. I honed road rage to a fine craft.

I was also a recipient of road rage on many occasions. One time I somehow upset a city bus driver as we both tried to merge into the same lane on the freeway. Suddenly, something smashed onto my windshield. It took me a moment to realize what happened. The driver had slid open his little side window and heaved his McDonald’s chocolate milk shake onto my car. I let him pull ahead since my vision was a tad impaired. I was able to make out a phone number on the back of the bus and called it with my cell phone. A lady answered right away, and I explained what happened.

“Not again?” That was her response. Then she hung up.

So, as I sit there in Freeland, at that four-way-stop, time and again, seething at the fact that so many people on this glorious island lack the math skills of being able to count to THREE, I fume.

Before moving here, I never hesitated to scream at any unacceptable vehicular action by some anonymous driver. My worst example, in a huge case of poor judgment, was the time in Bellingham, when I was a senior in college. I was backing out of an angle parking space, downtown, when a 1968 Volvo station wagon barreled down the street and nearly hit me. I screamed at the driver. I made a gesture and yelled a foul obscenity. Then my eyes cleared enough to make out the driver. My philosophy professor. The one who was yet to grade my term paper that I had very recently deposited on his desk. Whoops.

Okay, so as I have managed to make the kind and generous nature of folks on Whidbey Island a negative, and add the fact that the parking lot at Payless grocery store is the four-way-stop in spades, there is something that doesn’t happen here, and it is wonderful.

Nobody abandons their shopping carts in the empty space beside their car. An action that would result in blocking an empty space in a show of laziness that has, in the past, blown my mind. I love that I have almost never seen, here on Whidbey Island, an empty shopping cart listing idly, taking up a space a car could happily occupy. (Tourist season excluded)

I used to live in Mill Creek. At the grocery stores in that town there are times when half the spaces are filled with shopping carts. It’s almost like, “Hey, Buddy, move your damn car, I need to leave my cart there!”

Once I was behind a lady at the check-out counter. She had a baby about the same age as mine, and a similar collection of supplies. I made it out to my car, put the groceries in, wheeled baby and cart to the cart repository, and carried said cutie back to my car. As I was backing out, I noticed that the lady that had been in front of me had left her cart blocking the space to her right.

That bothered me. It bothered me because her car was one space away from where I had just walked my cart. I pulled my car out of the space and stopped directly behind her car. When she couldn’t back out, she leaned out the window of her giant, black, Cadillac Escalade, and shouted, “Hey.”

I got out of my car and said, “Oh, I was just going to help you put your cart back. No problem.” I retrieved her cart, wheeled it around her car, and nestled it into my old cart.

Trying to compose her rising anger she said, “I would have done it, but I have a baby.”

“I do too!!” I said, honestly thrilled that I got to share that news with yet another stranger.

“Harrumph.” Through gritted teeth she hissed, “Can you move your car?” She was livid.

The next time I am staring at the ceiling of my car, stationary, two car lengths from the obviously complicated traffic-controlling device that is a stop sign, I will take a deep breath. I will take that moment, a seemingly unending torment of a moment, and reflect on life on this island.

You can read in the parking lot, but best not to read while driving. (Photo by David Welton)

One Saturday, in the early fall, I was staining my deck, and realized I was one gallon of stain short. I called the lumber yard down the street and asked if they were open.

“Oh, no. I am one gallon short of stain for my deck, and I have a strong feeling this is the last sunny weekend for a very, very long time. One small gallon of cherry stain?”

“Okay. Tell ya what. I’ll put a gallon of your stain out by the front door. You can just come by and grab it.”

He did, and I did. Funny thing, though. He never asked who I was. No phone number, no name, just, “Come by and grab it.”

I just loved that.

Another time I called the pizza shop and asked if I could order two Reuben sandwiches.

“We’re out of Reubens, sorry.”

“Out of Reubens? What are you out of?”

“Hey, I was planning on going to the store on my way. Could I bring you a couple of loaves of rye bread?”

I gave him two loaves of bread, and he gave me two sandwiches. What a win-win. Except I think I got the better deal.

By that time, the confusion at the stop signs is likely almost resolved.

I will pause once more, and take inventory of all the aspects of living on this magnificent island. Then I will pose to myself the following riddle.

What would be better than living on Whidbey Island?”

Disclaimer: there was no actual road rage or despair during the photo shoot for this column, all the good fun created some curiosity from onlookers in Freeland. (All photos by David Welton).