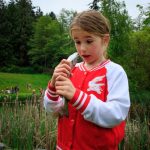 Castle on Whidbey | A Win-Schwinn Situation

Coming up the hill, as we neared the corner, I said, “Mom, wait till you see this. It’s so quiet. A dead-end street. You can’t really see the neighbors if there are any. So peaceful. We’re going to make an offer any ….” As we turned by the rickety mailboxes, we saw the strangest thing. Cars. I drove slowly down the tree-lined lane, and on either side of the road, there were parked cars. It looked like there could be a hundred of them.

My mom, in the back seat with her purse on her lap, said, “Hmmm, doesn’t seem very peaceful to me.”

“Laura? What the heck?” I asked. I was wracking my brain. “Is it an open house? Are we competing with hundreds of buyers? This is insane.”

I turned into the driveway between parked cars, past the gate, up the drive and parked. I got out and walked across the yard to the top of the hill. Next door, at a pond, were scores of people. Barbecue smoke was billowing. There was a tent. I, zombie-like, walked toward the crowd.

“Hi. Do you want a hot dog?” came from the cheeriest voice ever.

“Why, it’s the fishing derby, silly. You don’t know about it?”

“Every year at this time. A fishing derby. We give away bikes, have a barbecue. Loads of fun. Do you live there?”

“No. I mean, not yet. Hopefully. I was showing my family the quiet house we were going to buy.”

“Well, this must be a shock. Nope. Just once a year. Sure you don’t want a hot dog?”

Eight years later, another fishing derby. What a tradition! Albert and Lori Gabelein have been hosting this event for 27 years. It is supported by the Holmes Harbor Rod and Gun Club, which buys the many bikes that are given away as prizes.

“It’s just a worm, Dad.” The author shows off his fishing expertise. (Photo by David Welton.)

Every year, Albert has 800 teenage fish dropped into the pond. And every year, I hope to witness it. I hear a truck backing down the drive and jump to see if it’s the one sloshing with fish. One year, as I was pulling into our driveway, a flatbed truck with a large plastic tank on it was pulling out of the Gabelein’s driveway. I honked and waved, and the driver stopped.

“Thanks! Thanks so much. Really cool. Sorry I missed it. Have a great day.”

The driver gave me an odd look. Kind of a shy look. Fine. Not everybody is as outgoing as me.

He drove away. I parked, walked over, and I imagined I could see the new pond denizens swimming freely under the water. That’s when I saw them. Not the fish, but the two port-a-potties freshly delivered by that flatbed truck. Most likely the best reception that driver had ever experienced for delivering port-a-potties.

One year during the derby, I stood near a family: a mom, dad, and three boys. Two of the boys looked rather uncomfortably wet. “I have three sons, and two of them have fallen in,” said the mom. As she finished that sentence, boy three tripped, slipped and fell shoulder first into the pond.

Why one would fall into this pond rather than wade in is because it is configured with a sort of ledge. There are tall reeds, one giant, exotic, prehistoric-looking broad-leafed plant, and lots of huge, flat-topped rocks positioned around the water. Pretty. The rocks are great spots for dropping in or casting out one’s line. But what that also means is: If you are not careful, or are very young, or I reluctantly say, a member of the aforementioned family, you can fall in. And once in, getting out is sometimes a small challenge.

They give away new bikes to the kids for all sorts of best fish categories. It is so generous, and the looks on the faces of the winners are priceless.

One kid, though, was infamous among bike winners.

There was this rather feisty boy, an accomplished young fisherman, but he appeared to be the kind of student the principle might know by sight. He heard his name called as the winner of a new bike and was so excited. Vibrating sort of excited. He took off running. There is a slight rise from the pond up to where the barbecue tent, tables, and line of prize bikes are located.

The bike was proudly awarded, and he jumped on it. With glorious enthusiasm, he started peddling. Problem was that, added together, his enthusiasm, a natural cavalier attitude, pedaling, and … gravity, produced a result that is unforgettable.

It is a short downhill trip, and he was going fast. He and the bike, as they left the water’s edge, lofted into the air, very reminiscent of the scene in “E.T.” when the boy and bike appear as a silhouette before the moon. He landed tires-first onto the surface of the pond. Splash! Then nothing. Nothing but a cacophony of gasps, mixed with howls of laughter. Luckily the pond is not that deep. He was able to stand, lift the handlebars of his new bike out of the water, do a short walk/wade of shame to the edge of the pond, and struggle out.

I cannot remember if he got an ovation or not, but he deserved one. In my mind, enthusiasm and talent are way more important than not making a foolish decision. I am sure the bike was fine, and I am also sure that, in the next 20 or 30 years, he will forget all about the maiden voyage of his prize.

Living next door affords us the luxury of reaping the benefits of the fishing derby and the glorious pond year-round. So, fishing on that day is not a priority. But we always show up to marvel at the turnout and circle the pond to view the happiness. It is always such a pleasant and positive experience. For example, at nearly every derby, I have witnessed a five-year-old prematurely cast and hook his father’s ear, rather than a trout. The result was not cursing, but remarks like, “No, buddy. Here let me get this off my ear and we’ll try again. Wait till Daddy says ‘Go,’ next time, OK?”

What the fishing derby is all about. (Photo by David Welton.)

The carnage is sometimes a bit much. If one is a lover of all sacred life, seeing an eight-year-old holding a string of six dead fish and sporting a huge smile might be a tad unsettling. But fish just seem to get a bum deal in the human realm of compassion. How many vegetarians have you met who say, “Oh, well I do eat fish”?

There is a great children’s book, “Bear Wants More,” by Karma Wilson. In this book, Bear is very hungry, and his good friends help him find food. Lovely little adventure, and Bear’s animal pals impart a nice message about friendship. Unless you’re a fish.

In this story, Bear’s animal friends (a mouse, hare, badger, and raven) help Bear get some food. Together, they catch a trout. I was reading this and thought, “Why didn’t the trout say, while dangling from the hook, ‘Hey, what the heck? I’m an animal too. Eat that mouthy crow if you’re hungry!’”

I asked Albert if there was something he wanted to say about this great event, something important that needed to be in the story. And he said, “Just, that it’s a chance for kids to catch their first fish.”

That sums it up perfectly. Simple and important. Because, and I don’t know why this is, but when a child pulls that first fish out of the water, the look on his or her face is always so special. A look of unbridled joy and great accomplishment. The size of the fish doesn’t matter in the least. I have a photo of my son Mason (who is now 30) when he was about five, holding a line with a dangling fish. The picture captures his rapturous joy, marveling at that fish, which had to be almost three full inches from head to tail.

My son Carter, eleven, joined the fun this year and expertly cast hooked worms into the pond from one of our favorite rock perches. He was a bit disappointed that he didn’t catch anything in the time we were there. Kids were pulling fish out of the water all around us. Two little girls, both from his brother’s second-grade class, kept running past us in tandem, each with a freshly snagged trout wiggling within their grasp. But I reminded Carter that it is a 40-yard walk from our property to the pond for another try.

Logan and Shiloh confirming it was a great day. (Photo by David Welton.)

While we were there, a bunch of bikes were doled out to squeals of joy. One boy even successfully raced his bike around a portion of the lake though his kickstand was down. I still don’t know how that is possible.

By all accounts, the day was a huge success. Again. Especially if one measures success by the number of big, beaming smiles on all the kids’ faces.

That weed was a real fighter.  (Photo by David Welton.)

To view the photos below full-size, click them. All photos by David Welton. 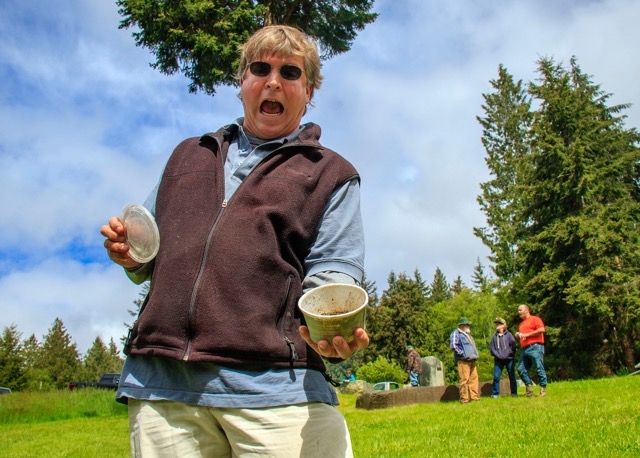 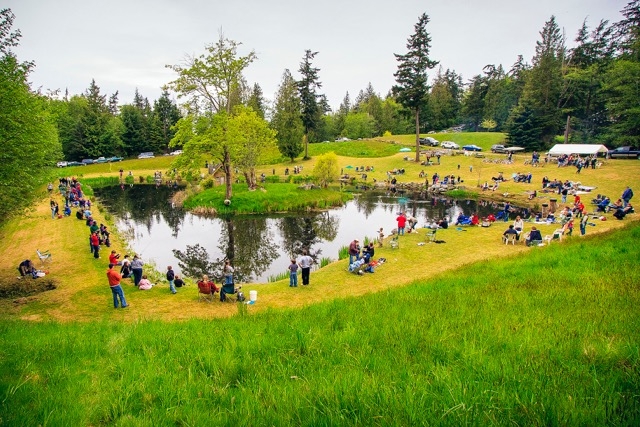 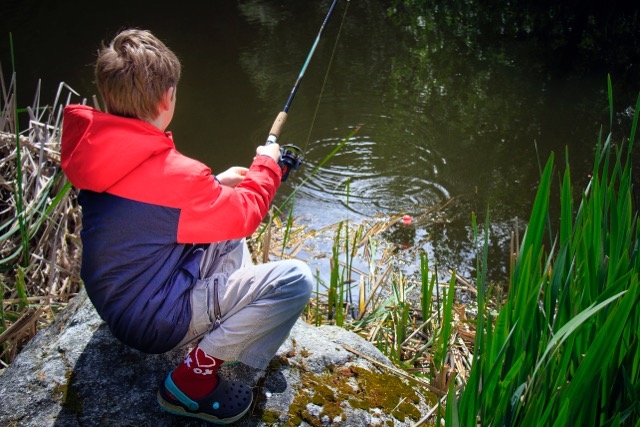 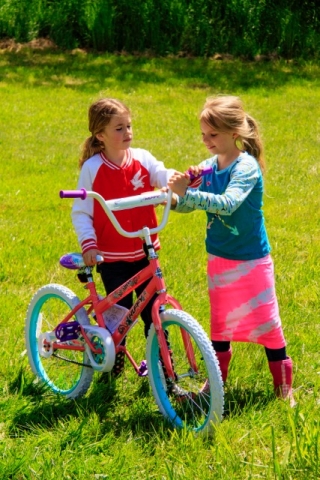 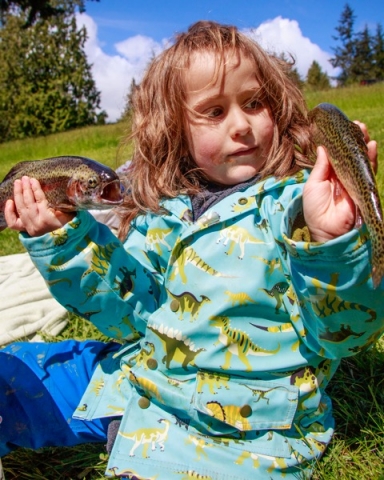 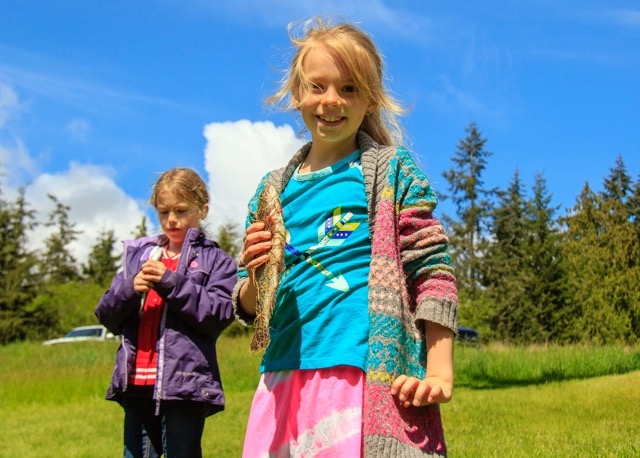 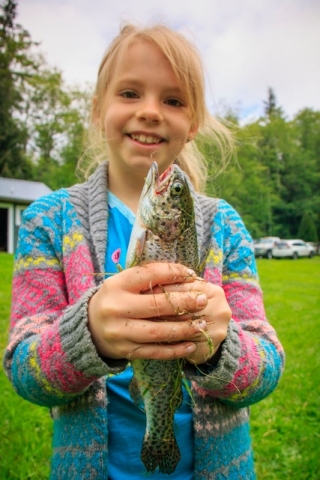 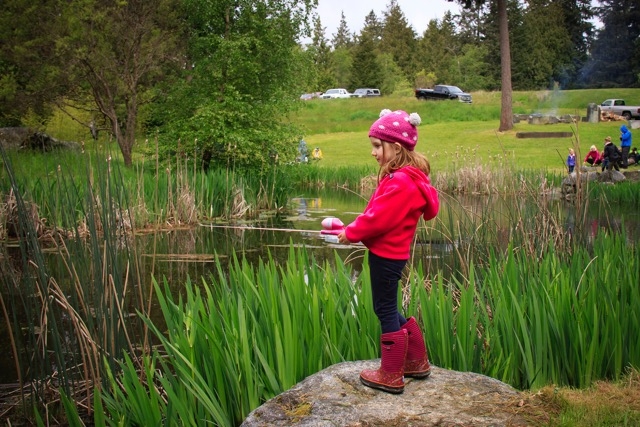 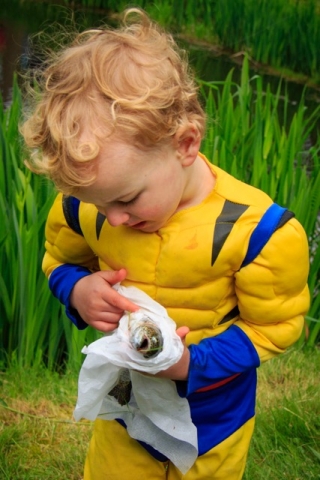 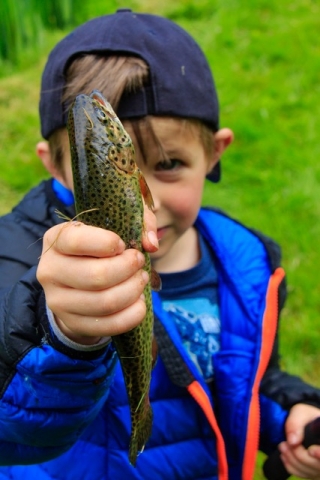 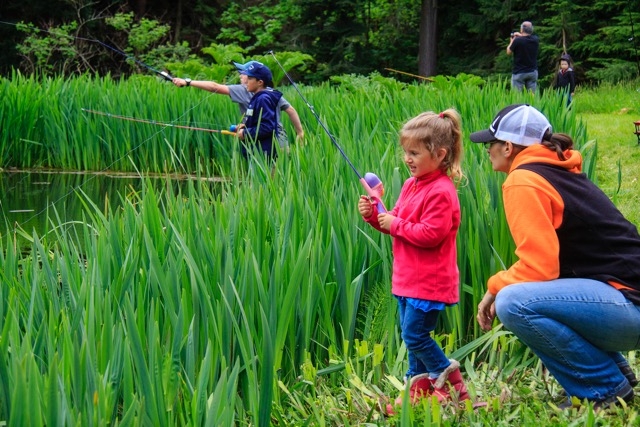 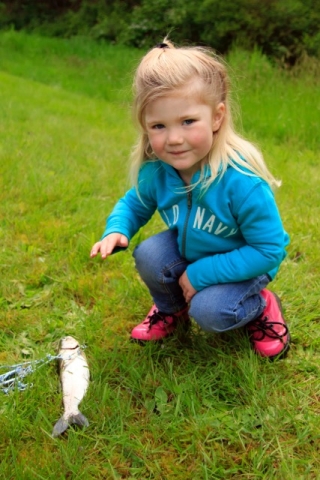 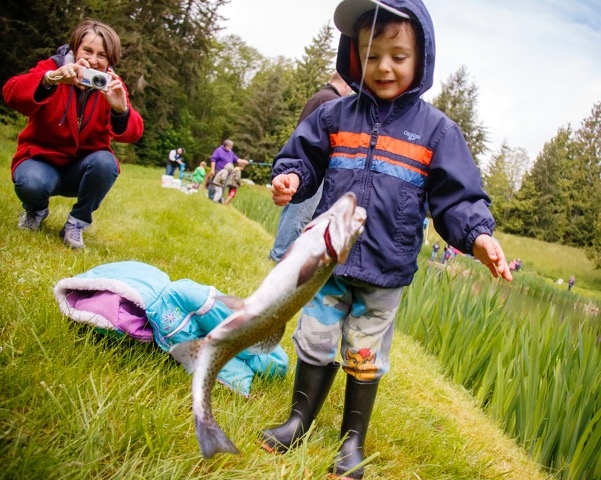 David Welton is a retired physician who has been a staff photographer for Whidbey Life Magazine since its early days.  His work has also appeared in museums, art galleries, newspapers, regional and national magazines, books, nonprofit publicity, and on the back of the Whidbey Sea-Tac shuttle!