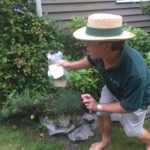 Castle on Whidbey || Beware the Ducoté

I was awakened by my wife, fully dressed, standing by my side of the bed. “Hold me,” she said, and pulled back the covers. I was confused but interested. I was thinking she was about to crawl back into bed when she said, “I heard a sound. I need your help.”

I looked at the clock. It was 5:20 a.m., the time Laura heads off to work each morning.

“I’m so sorry to wake you, but…I’m spooked. There’s something out there. When I opened the door it made a sound. It was scary. It was, it was…kinda like a growl and a quack. Will you walk me to my car?”

I got out of bed and grabbed my underpants off the floor. I stumbled down the stairs with her behind me and, with my underwear safely in my hand, opened the front door.

With my fists shadow-boxing in front of my face—like the Cowardly Lion acting tough in the Wizard of Oz—I walked her most of the way to the car.

Of course she woke me up. With fears of the vicious Ducoté—half coyote, half duck—lurking, ready to waddle out from behind the bushes, she needed my help. This rarely seen creature is identified quite easily by its unique, yet terrifying, call—a cross between the spine-tingling snarl of the Alpha Coyote claiming his territory and the guttural squeak of water fowl.

“GRRRWHOOWACK” can make your hair stand up on the back of your neck.

Well, I was standing out there, not wanting any part of my body to be snapped at by that wicked bill. He must have scurried (or waddled) off because we caught no sign of him. I was glad to help, though. I wouldn’t want Laura to confront such a beast by herself.

I waved as she drove off, then went back inside. I snuck back into bed as our baby awoke. He let out a loud and unusual sound alerting me he was up for good, and hungry. It was kind of a cross between the coo of a dove and the screech of a starving hyena.

Time passed and the Ducoté didn’t rear its ugly beak/snout again. So I was happy to chalk it up to my wife, at 5:20 in the morning, being a tad confused.

A short time after that, my oldest son, Mason, spent the night above the garage—a cozy abode lacking only a bathroom. When Mason came in for breakfast the next morning we asked him how his night’s sleep was.

“To tell you the truth, I was a bit freaked. I went outside to use the facilities when, next to me, in the dark, I heard the weirdest sound. It scared the daylights out of me.”

“This is going to sound weird, but it was kind of a cross between a growl and a quack.”

Before I could get my question completely out of my mouth, Gordy said, “Raccoon.”

I’ve never actually had any problems with raccoons. I have friends who have some fairly awful stories of damage or profound annoyance from raccoons, but they’ve pretty much left me alone through the years, with just a few mild exceptions.

One evening, a few years back, living in Lynnwood, I moseyed over to my neighbors’ house. Between me and them was a large raccoon. Because, in my mind, I exist at the top of the food chain, I took two steps toward it and, leaning forward, let out a bark-like sound. The raccoon, showing how intimidated it was, took three steps toward me. Surprised at that, I took another step forward, and stood up straight. The raccoon took two more steps forward, sat back on his haunches and made, what appeared to me, to be two fists.

With one fist under his chin and the other out in front, I next could have sworn he spit— out of the side of his mouth—like an old boxing manager chewing tobacco. It was then I realized I had something rather urgent to attend to back inside. Like making sure Jeopardy was recording.

But, besides that, I’ve had almost no direct contact with raccoons.

I have, though, had some indirect interaction with the rascals.

I’ll explain. I like to launch my golf balls, via my driver, into the woods behind our house. Then I venture in and collect them. Golf ball hunting is an old family tradition. The problem is that I’ve hit hundreds of beat-up golf balls into the woods, but I only find a few when I go in to search.

It was quite the mystery until, one day, I found one tightly wedged in the crook of a tree root. Well, it was kind of a golf ball. It had been devoured.

Imagine how frustrated these raccoons must be.

“Honey, I got another egg!”

“Well, I sure hope it’s better than the last ones you’ve been carting back here.”

The other thing they’ve done is eat my garbage can lids. Why this isn’t a reason to hate them so far is that they haven’t yet eaten the actual garbage. I can imagine what an awful mess that would be. But our raccoons just eat the plastic lids. I guess they’re so full from consuming a half-pound of Rubbermaid industrial grade plastic, there’s no room left for the chicken bones.

The raccoons chewed up the lid of our garbage can  in such a strange way it defies explanation.

So I bought a new lid. I bought it on Thursday and put the garbage out Friday morning. By the time the garbage got picked up later that morning it looked like this.

The raccoon didn’t strew the garbage about. As I mentioned, he must have been full. Still, one hopes to get more than one use from a garbage can lid.

But the real mystery is the original lid. It looks like this.

As you can see, it was chewed on the inside. It appears the raccoon was trying to get out. How is that scenario possible?

I have only one guess.

Raccoon Number One pries the lid open, wiggles up, then loses his balance, falls inside and emits a yelp. Raccoon Number Two jumps on the lid, locking it tight.

Eventually, Raccoon Number One—realizing no help is coming—begins to gnaw his way out.

This, of course, seems absurdly unlikely, but it’s all I can come up with.

So, besides possibly absconding with scores of my golf balls and playing an odd variation of hide-and-seek in our garbage cans, I don’t really have any problem with raccoons. But, on the minuscule chance that Gordy was mistaken, there—in the back of my mind, if  I’m alone in the dark, on our property—a thought often creeps in. What if —roaming-waddling in the wilds of Whidbey Island—is the dreaded and feared Ducoté? What do I do? Shoot it with pepper spray, or feed it some white bread?