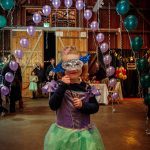 We islanders have our unique ways of celebrating holidays—and creating some of our own. Every month seems to bring at least one parade or festival that calls us into the streets, waters, and parks to cheer, march, or strut. Read the observations of one island philosopher and one “Conductor of Fun” on the relationship of celebration to community…and relive some of Whidbey’s best events through photographs that capture the spirit of islanders who know how to throw a better party.

For more about celebrations on Whidbey, pick up a copy of the 2018 Spring/Summer print issue, available at retail locations on the island.

All photos on this page were taken by David Welton.