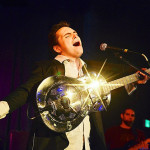 Choochokam Festival of the Arts has announced the performers for the 2014 Saturday night street dance, the highlight event of the 39-year-old celebration in Langley. The festival this year is scheduled for Saturday and Sunday, July 12-13. Festival organizers expect the construction work on Second Street will have no adverse impact on festival music or any of its other activities.

“We are all trusting the city to have it completed, or nearly completed, in time,” said Celia Black, president and Entertainment Chair of the Choochokam Arts Foundation.

The Ben Rice Blues Band will headline the street dance on Saturday night from 8 p.m. until 10 p.m. Seattle funk/hip-hop group 20 Riverside will open with an hour-long set beginning at 6:30 p.m. Black said that Choochokam is still accepting applications from local and regional acts to perform on one of the three stages that will be set up during the two-day celebration of the arts.

The award-winning Oregon-based Ben Rice Blues Band has earned significant recognition from various blues enthusiasts and organizations. Rice represented the Cascade Blues Association at the 2014 International Blues Challenge in Memphis, Tenn. this past January with a back-up group called the iLLamatics. They were one of the top nine finalists out of 250 acts.

Rice writes much of the group’s material and plays slide, electric, dobro, lap steel  and cigar box guitars. He has described his playing as “a kitchen sink of blues.” He first performed for Choochokam in 2010.

Festival president Celia Black said the group 20 Riverside has been a crowd favorite for six years, ever since their first performance at the Useless Bay Coffee Company

The members of 20 Riverside (Photo used by permission of the artists.)

Pavillion in 2008. “Their music blends the classic rock and brassy horns of Chicago, the funky grooves of Tower of Power, and the hip-hop rhythms and socially conscious lyrics of the Roots,” she said.

Both street dance groups consist of young players and Black expects they will have a great deal of cross-generational appeal. She said one of Choochokam’s goals is to serve the entire community and one way to do that is to provide music that appeals to all generations.

“We try to provide opportunities for young musicians and up-and-coming acts as well as feature more established musicians and local favorites,” Black said. “We have had high school students right along with seasoned pros perform on the Choochokam stages.”

Musicians may apply to play at Choochokam until Tuesday, April 1, either through the website or through Sonicbids. Applications are also open for exhibitors through the end of March.

Photo at top: Ben Rice  (photo used by permission of the artist)