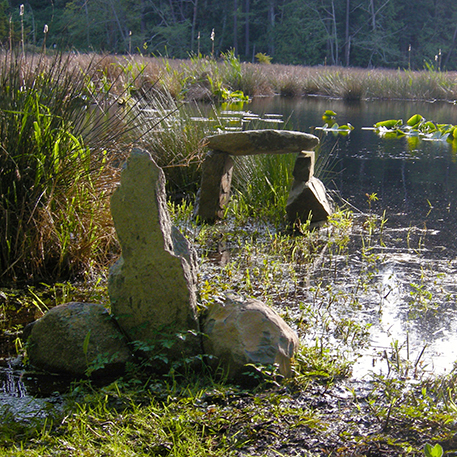 Ever wonder why we feel deeply connected to certain places? Chuck Pettis, founder of Earth Sanctuary—a nature reserve and Buddhist retreat center in Freeland—wondered the same thing. His curiosity resulted in a lifelong quest to tap into energies that create positive resonance.

Pettis studied ancient concepts such as dowsing (a way to discover water, minerals or other material below the earth’s surface through use of a “divining rod).” In Seattle, he investigated “ley lines” (considered by some to be part of the grid of earth energies that circle the globe) and shepherded a project called the Seattle Ley Line Map. According to the website, “Sacred places located all over the world are generally located over various earth energies. These electromagnetic fields of energy emanating from the earth have the capability to improve the well-being of people as well as the earth as a whole.” The 1988 project was commissioned and funded by the Seattle Arts Commission.

Pettis brims with an unusual appealing energy and exudes a believable sense that anything is possible. My husband and I met up with him at the Taproom in Bayview last month and were impressed by his seemingly endless creativity and devotion to making the world a better place. He was inspired at an early age, he said, by Buckminster Fuller, an American architect, systems theorist, author, designer and inventor.

While getting a bachelor’s degree in psychology from Carnegie-Mellon University, Pettis studied Fuller’s writings and built a number of geodesic domes, including a series of large and small domes and inflatables for the first Earth Day in 1970. Inspired by Fuller’s stated vision to “make the world work for 100% of humanity,” Pettis began studies in the Design School at Southern Illinois University where Fuller was a professor and innovator; Pettis earned a Master’s degree in design and began a lifetime of serious meditation practice.

Like a bloodhound on a trail of clues, Pettis continued to pursue trails of higher consciousness, positive energy and human potential. He spent time studying the interfaith concepts held by the Foundation of Light in Ithaca, New York. This led him to the Rollright Stone Circles on the Oxfordshire/Warwickshire border in England. He felt something powerful there, he said. He recalled wondering, “whoa, what’s going on here? The place has a powerful psychological pull.” He began to study the impact of ley lines on design and placement, evoking special experiences in people. His awareness of the laws of prosperity and attraction grew. He realized he could make a difference in people’s lives and earn a living at the same time.

Pettis’ talent for creating socially conscious companies and making money through his brand consulting practice resulted in a stock windfall and his eventual purchase of 72 acres of wetland and forest along Newman Road. This led him to the creation of Earth Sanctuary, where a walk through its paths slows time and invites a look into the beauty and mysteries of nature.

At the entrance off Emil Road stands a stack of large balanced stones called a cairn. A series of colorful letters have been painted on the surface by Lama Migmar, resident master artist monk at Sakya Monastery of Tibetan Buddhism. The words translate to “Om Mani Padme Hum,” a traditional Sanskrit prayer that invites one to transform impurities of mind, body and spirit into the pure mind, body and spirit of a Buddha.

Once inside Earth Sanctuary, the visitor is greeted by a Tibetan stupa, used for meditation and the amplification of prayers, and a row of Tibetan prayer wheels. Alders, maples, cedars and firs line the trails, along with ferns, salal and huckleberry. Shelf mushrooms decorate decaying trees.

Another place of power is the Cottonwood Stone Circle, which contains pillars of basalt around a central circle of stones. Pettis said that the 12 pillars are placed to mark ley lines and water lines and connect the sacred masculine and feminine. “The columns are very yang—masculine,” Pettis said. “One technique of creating sacred space is using opposites. The complement of basalt is the turtleback stone…. Turtleback is super yin—female energy. They’re buried below each stone and come together in a power center. The conjunction of both powers holds strong emotion

A number of people who visit Earth Sanctuary have little experience in nature, Pettis said. “They see a deer and it doesn’t run away from them. They’re having an experience in a safe place.”

Most of the visitors to Earth Sanctuary, though, are what Pettis terms “cultural creatives.” “Cultural creatives think they’re alone,” he said, easily, as my husband and I squirmed inwardly. “They need to come out of the closet… speak up. They can’t let other loud voices say what is good and evil…. They keep their mouths shut because they don’t want to get into an argument.”

At Earth Sanctuary, Pettis said, “We make nature the priority. The key to happiness is to make others happy. Earth Sanctuary evokes, motivates people to a higher state of mind, perhaps to meditate or pray. We can’t do that enough.” We need to get past the thought of good versus evil to be able to act like a high-quality person.”

A serene face lies along one of the paths at Earth Sanctuary. (photo by Kate Poss)

While Pettis promotes lofty ideas of becoming a quality person and ley lines and higher consciousness, he also is practical when it comes to maintaining the land. He charges visitors $7 each time or $35 for a year’s subscription. This request causes grumbling among some, yet Pettis is a pragmatist when it comes to providing a place for folks to rest and reset, balanced with the cost of running it. Earth Sanctuary was created with a vision to what the future will be like in 500 years. Pettis has planted over 15,000 native plants and 3,000 trees that he believes will thrive in the years to come as the earth’s climate changes.

“Earth Sanctuary is all about sustainability,” Pettis said. “The visitor fees and retreat fees sustain it. Even in the middle of winter the retreat house is three-quarters booked.”

Yup. There’s a sweet little house there that can be rented for a little while. Feral cats add character to the mystical feel of the place.

So, take a leap of faith and tune in to what Earth Sanctuary offers. It may change your life.

Enter Earth Sanctuary at Emil Road off Newman Road in Freeland. Website for the map: http://www.earthsanctuary.org/pdf/Self_Guided_Sacred_Spaces_Tour.pdf).