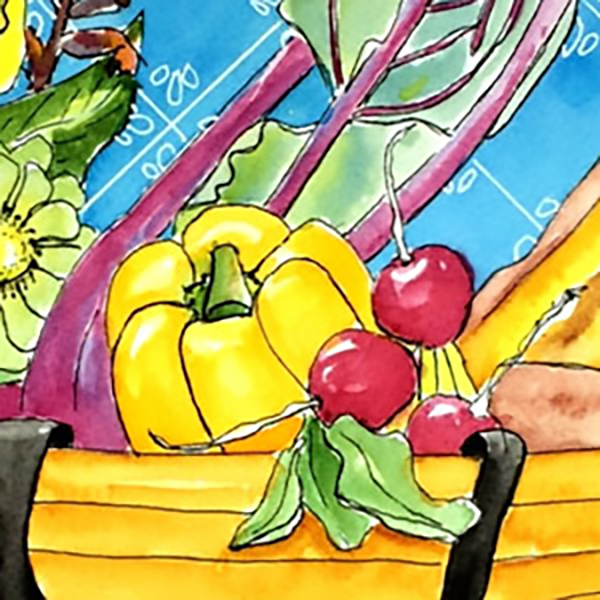 The end of August on Whidbey Island evokes a sense of bittersweet that comes with knowing the long summer days and sunshine we enjoy will give way to a cycle of cool and misty weather in the months to come.

One way to charge our creative batteries this time of year and absorb our island’s natural beauty is by taking a drive and meandering along the self-guided Summer Open Studio Tour of the Whidbey Working Artists on Saturday and Sunday, August 27 and 28.

“Come Curious and Leave Inspired” is this year’s theme, with a showcase of more than three dozen artists who will open their studios—free to the public—from 10 a.m. to 5 p.m. each day.

Two of the artists helping to shepherd the annual event are Coupeville residents Kay Parsons, a watercolor painter of the natural world, and Janet Lewis, a luthier whose passion is woodworking, creating fine guitars, ukuleles and furniture.

We all met up at Ciao in Coupeville to chat about the island’s penchant for attracting independent, authentic and talented artists of all stripes. While modest about talking about themselves, Lewis and Parsons spoke instead about how this tour displays the talents of their fellow artists and celebrates the sponsors of the event, including Front Street Realty, Whidbey Island Arts Council and Whidbey Life Magazine, to name a few.

Buffy Cribbs said her art is often inspired by “letting the kindergarten of her mind out to play.”   (photo courtesy of Buffy Cribbs)

“The tour is all about understanding the environment that the artists create in,” said Parsons, whose voice still carries its soft Georgia drawl. “This is all about experiencing how artists see their world. For me personally, it’s about my connection with the land and watching things grow. As you go around to the studios you see the character of the artist.”

Lewis said that visitors to her studio are surprised by its neatness and “ding me because I don’t have great wads of sawdust. I do have a NICE shop. I’m spoiled. It is set up for teaching in the future.”

Local business and libraries throughout the island carry the tour’s colorful catalogues, which are filled with photos of participating artists’ work, directions to their studios and a guide map near the back that identifies artists’ locations by their catalogue number. The catalogue can also be downloaded as an 8 mg PDF file at http://www.whidbeyworkingartists.com/catalogue.html. The guide to the artists’ tour begins in the north with No. 1: Jerry Pike, a “ceramic archaeologist” in Oak Harbor, and ends in Clinton where one can visit No. 37: Blueschool Arts and Zia Gipson. Visitors to the tour can, of course, make up their own personal tour order as they prefer.

Parsons, for instance, is listed as No. 4—Looking Glass Cottage Studio—and her website, phone number, email and address are included along the edge of her page.

Lewis, No. 10 on the tour, moved to the island four years ago from the Laguna Beach art enclave, and said she is impressed by the caliber of artists she’s met so far.

“This isn’t your cookie-cutter kind of art,” Lewis said. “There is a unique voice here.”

Lewis said she already feels part of the family of artists who live here. She takes inspiration from fellow artists such as Mary Ellen O’Connor, No. 13 on the tour. O’Connor creates jewelry and etched glass pieces and is also a primary organizer with Whidbey Working Artists.

Both Parsons and Lewis praised Sue Taves, No. 23 on the tour, whose sculptures in basalt and other stone are well known.

“Sue’s belief in the arts is a progressive value and shows how a community can be crafted,” said Parsons. “She busts her back end for us. It doesn’t just happen. Sue has changed the arts community in a profound way. She has created a vehicle for the world to realize what we have in the Whidbey Island artists.”

Mark Laska, chef/owner of Ciao, stopped by to say hello. When asked about the diverse and connected arts community here on Whidbey, he said, “The community is remarkably layered. We hold hands in so many ways.”

Talking about holding hands, Whidbey Working Artists is part of Whidbey Island Arts Council, which assists local artists and cultural groups with advice, financial aid and sponsorship. For more about this artistically-minded non-profit, visit their webpage at islandartscouncil.org.

Whidbey Working Artists was formed in 2004 as a vehicle for promoting the visual arts and artists of central and north Whidbey Island. Since then WWA has hosted annual tours and expanded its scope to include artists from the entire island. Its members wish to share their passion about creativity and promote the beauty of art.

Visit WWA’s webpage, whidbeyworkingartists.com/artists.html, and hover the curser above an image; the artist’s name will appear and take the viewer to further information about the artist. The webpage photos are organized to correspond with the numbers on the self-guided map in the catalogue.

Jim Short rescues homeless wood and gives it a new identity. He likes the character that knots, stains and other blemishes give each piece.   (photo courtesy of Jim Short)

Sue Taves says each stone has its own story to tell and her job is to discover that story through carving.   (photo courtesy of Sue Taves)

Kate Poss recently retired from her job as a library assistant at the Langley Library. She worked for three summers as a chef aboard a small Alaskan tour boat from 2008 to 2010. She was a newspaper reporter in Los Angeles for many years before moving to Whidbey Island where she likes ‘talking story,’ hiking, hosting salons and writing her novel.