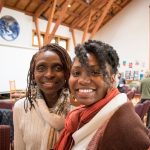 International social artist Tannur Ali performs. A powerful line from one of her poems: “Our babies weren’t made in vain.” (Photo by David Welton)

There are people who see problems in their communities and say, “Somebody should DO something about that!” And then there are people who roll up their sleeves and come up with solutions. The sixth annual Thriving Communities gathering at the Whidbey Institute last week was a celebration of problem-solvers who prove that community needs are best met by community members themselves.

The theme this year was “Communities Poised on the Edge” and featured films and speakers addressing issues such as affordable housing, food security, local investing, diversity, mentoring new mothers, supporting people in their healing, and aging in place. In between presentations, guests were treated to performances by Tannur Ali, a powerful and distinctive social artistry poet who founded iLogic (Institute for the Love of Genius in Communities).

Judy Feldman, executive director of the Organic Farm School, talked about the need to teach farmers how to survive and thrive. She recalled when the program was on the edge: when grants ran out and land used for the classroom was no longer available. Thriving Communities’ Jerry Millhon connected her with Ron Sher, founder and CEO of Sher Partners, a family real estate and investment firm known for Third Place Books. Sher happens to own land in the Maxwelton Valley that became the home of the Organic Farm School.

“After each wall we hit, I asked if we were still relevant,” Feldman said. “Thanks to Ron and Eva, and to Jerry, who did a video on us, now we have a phenomenal place and an eight-month-long program.”

Thriving Communities is shepherded by Jerry Millhon, former director of the Whidbey Institute. A beloved elvish-like grandfather figure, Millhon connects those who have needs with those who can help.

“The thing that we do best is find people (usually women) in communities that see a need and fill that need with the work they do,” says Millhon. “The story that is important is how they have used community capital (not financial capital) to bring a passion into fruition. And that is the story that opens up others to copy that in other communities. We think there are about 45 to 50 community members who have copied some aspect of the work and rooted it in their own community.”

In addition to the Organic Farm School, the following organizations presented.

Healing Circles in Langley was created by Diana and Kelly Lindsay and is associated with Commonweal Cancer Help Program, a national leader in cancer support. It provides low- to no-cost service that offers a safe sanctuary, social support, classes and conversation on a variety of topics from care for caregivers to a book group devoted to reading “A Year to Live: How to Live This Year as if It Were Your Last,” by Stephen and Ondrea Levine. “We are a lab whose idea is spreading across the country,” Diana Lindsay says.

Mother Mentors of Whidbey Island was founded in 2009 by Kristin Lasher, a grandmother who saw the need for mothers to find ways out of isolation and connect with other moms and their children. Providing mentoring for moms and Playscape programs for children, the program has expanded to Oak Harbor. “Parents can have adult conversations, get their basic needs of support met, and learn the basic knowledge of parenting,” says Kate Grossman McVay, executive director for Mother Mentors.

Lynn Willeford, front, a ‘serial starter-upper’ talked about her latest project, South Whidbey at Home. She sits with Pam Schell, of the Inn at Langley, who is active in providing support for community non-profits. (Photo by David Welton)

Year by year, the Thriving Communities gathering yields more videos and stories about inspirational organizations that bring healing and resilience to their communities. It showcases the best in us — inspiring the rest of us.