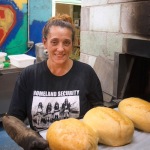 “When your perpetual thought is of your dream, it can become a reality,” said Kelly Baugh, owner of the new Sundance Bakery in Langley.

For many years, Baugh’s dream has been to have her own bakery.

Kelly taking bread out of the new wood-fired oven.

“My business plan has always been about finding that little place in the world where I can be the village baker,” said Baugh.

Originally from Chicago, Baugh started working in the food service industry at age 11, making pizza dough in an Italian restaurant.

By age 18 she was the assistant manager of an A & W restaurant. Baugh also worked 14 years as a prep cook and assistant baker.

In 2001 she received her Associate of Arts (AA) degree in Baking and Pastry Arts from Le Cordon Bleu College of Culinary Arts, then worked as a baker/manager for Great Harvest Bread Company and later for the Lucky Eagle Casino as baker and pastry chef.

Kelly shows some of the whole wheat grains destined for bread.

Baugh, 43, moved to Whidbey Island 18 months ago with her five children, son-in-law and two grandchildren.

Last year she leased space in the historic building at the corner of Second Street and DeBruyn Avenue in Langley.

At first, Baugh tried having a café and bakery in the space, but soon realized she needed a really big oven to make the bakery thrive. She closed down the café space over the summer to concentrate on getting the oven built.

Baugh initiated a “Credible” crowd-funding campaign and eventually got the money to build a huge brick wood-fired oven at the back end of the building, which Sundance bakery now occupies. It took four months to build the enormous oven that can bake up to 100 loaves of bread per firing.

Kelly holding up a shock of grain.

In addition to Credible funding, Baugh got a start-up loan from Whidbey Island Local Lending. She also received generous direct donations from the late Paul Schell, Jean McIntosh, and George Henny of Whidbey Telecom, and others who wanted to see an old-fashioned bakery in Langley.

Langley boosters Fred and Sharon Lundahl helped find used bakery equipment for her at a deep discount from a Camano Island bakery that had gone out of business. Baugh loves the giant mixer they found that easily handles the dough for 100 loaves at a time.

Baugh’s outgoing personality and can-do attitude have made her an expert networker, and along the way to realizing her own dream, she’s partnered with others interested in sustainable practices.

“Chris Williams, who writes a farm blog about Whidbey Island, helped me connect to farmers and their projects,” Baugh said.

“One thing led to another,” said Baugh with a smile. “For instance, I got interested in using locally-grown grain for my breads and got advice from Dr. Stephen Jones at WSU County Extension about which grains grow best here for the highest protein level and the greatest yields. And a historian gave me some barley seed from 700 AD that was found in a pyramid in Egypt and now it’s planted along with other grains at Pacific Rim Institute.”

When she needs grain to make flour, she uses her antique grinder to mill what she needs for a day’s baking.

Recently, Baugh arranged to transport harvested spelt grain by boat through yet another alliance with Salish Sea Trading Cooperative, which works in harmony with the wind and tides to sail local goods around Puget Sound. Nash’s Organic Grains from Sequim bound for Sundance Bakery arrived via sailboat at the Port of Langley on October 12.

“I want to minimize the use of fossil fuels in the delivery of grains to the bakery,” said Baugh. “By next spring, we hope to not have to leave the Island for anything we do here at the bakery.”

Baugh’s whole-wheat bread uses locally grown and freshly ground wheat, honey from Oak Harbor’s Morningstar Honey Farm, Salish Sea salt, and yeast made from the “leavings” of local wineries. This is the nutritious bread that she provides to Whidbey Island Nourishes (WIN) for their family feeding program. Currently she supplies about 40 loaves per week to WIN.

“WIN’s bread order kept me going over the summer when we were building the oven,” said Baugh.

Soon she’ll be sharing the historic building with two other tenants: Patrick Boin and his new Salish Kitchen restaurant and Sarah Boin with her Wander on Whidbey store.

Looking around at her fledgling bakery and realizing how far she’s come in 18 months, Baugh is grateful for the support of the community and her family for helping make her dream come true.

“It’s blooming into everything I wanted it to be,” she said.

Image at the top: Kelly pulls bread from the new oven (photo by David Welton)