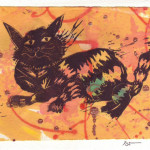 Diane Tompkinson is a dreamer. And when she dreams, she dreams big.

“Now, I am living the working artist dream on Whidbey, and loving it.”

Tompkinson is not really new to Whidbey. Her parents were longtime residents, who lived at Ledgewood Beach for 45 years and were hugely involved in the community. They started fish fries and wine tastings and Mexican domino nights.

“The community center is named after them,” Tompkinson said with pride.

“When I bought this property in 1999, my Dad started building my studio for me, which he said was, ‘just a shed.’ While I worked clearing the land, he kept cobbling on more rooms, and now it’s my little oasis.”

Her architect brother helped her design the lovely home that sits atop the hill overlooking her gardens and her studio space. It was completed four years ago, at which time Tompkinson retired as a school teacher and took up permanent residence on the island.

Tompkinson stands with her two dogs Missy and Charlie in front of her Coupeville studio. / Penny Webb photo

“I wanted the studio to be very much separate from the house, so that when I come down here, I come to work.”

Her two dogs, Missy and Charlie keep her company as she goes about the business of printmaking.

Tompkinson’s artwork is inspired by her experiences with nature and informed by her family’s rich artistic heritage. Her father was an old-time carpenter, who knew how to do everything and was always teaching Tompkinson and her two siblings’ skills. Her mother was a master carver of Native American forms and also a drum maker.

“My parents taught us how to DO things, so we were always whittling on something or painting something or drawing.  I can’t remember a time when I didn’t have a sketch pad by my side,” she said.

“My parents motto was not ‘do without’ but instead, ‘figure out how to make it.’ So we did.”

As a teacher, Tompkinson used her love of art to help her students become passionate about math.

“One of the things that art does is help kids ground in other subjects, math in particular. I used art first as a carrot to get kids’ interest, and then to get them passionate about exploring what they could learn,” she said.

“After all, you don’t know what your gifts are until you try.”

Though her main focus these days is on printmaking, Tompkinson slips her primary love of painting into the work by first painting large sheets of organic papers that become the background for her prints. She uses her carving skills to create linoleum print blocks and also works with monotypes to create one-of-a-kind images.

“I paint the image onto a Plexiglas plate and then press the image onto paper,” she said. “Sometimes there is enough paint left to create a ‘ghost’ image, which often times I like even better than the original.”

She is also enjoying chine collé, which is a medium using layers of paper and images, bonded together with rice glue.

“I use a lot of botanicals and fibers, and then build up translucent layers that bring a depth and texture to the piece.”

Tompkinson is always trying something new, always interested in learning from this rich life.  She’s a big believer in building new dreams.

“When you come up against an obstacle, be a river.  Flow around it. Find a way to get to where you are meant to go,” she said.

View Tompkinson’s artwork at her WLM Profile Page or in this month’s Virtual Gallery here.

Penny Webb is a mom, musician, writer and gardener.  She can be found most days staring at her dirty dishes in shock and awe.