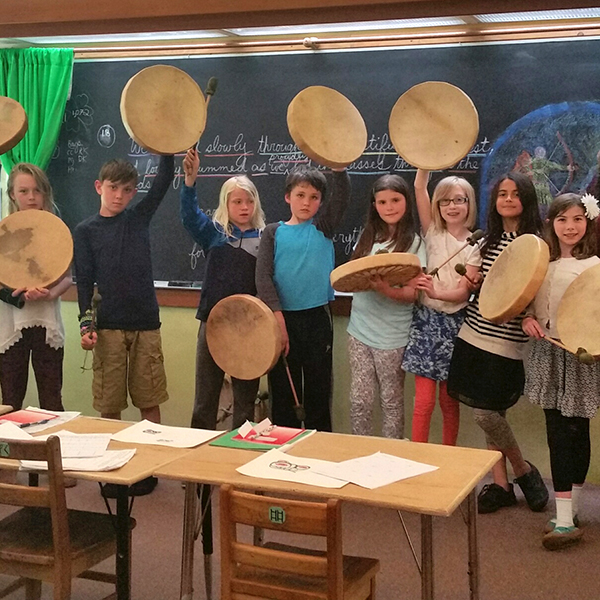 One way to learn history is by studying the culture and stories of the people who made it. An annual “potlatch,” hosted each May by the Whidbey Island Waldorf School, brings indigenous traditions to life when students meet and learn from Native American elders.

The potlatch is a traditional, ceremonial gift-giving feast practiced by indigenous peoples of the Pacific Northwest Coast.

Honoring the tradition of our coastal Native Americans, Angela Lindstrom directs and hosts the event each year for fourth grade students in Waldorf schools from Bellingham to Olympia. A teacher at the Whidbey Island Waldorf School, her cultural background includes Ojibwa and Cherokee ancestry. Over the years Lindstrom has cultivated a cadre of Native American elders who teach skills and traditions that leave the students awed in the end.

The elders include:
• Angeles Peña, a Navajo, who acts as master of ceremonies. Peña is a storyteller as well and has taught students how to make walking staffs
• Bonnie Pemberton, or Soaring Eagle Woman, who has come each year to teach students how to create drums
• Paul “Che oke ten” Wagner, an award-winning Native American flutist and Coast Salish member
• Sondra Simone Segundo, a Haida artist, singer and author
• Julie Pigott, an honorary elder who teaches Native American games

“These elders become like rock stars to the students,” Lindstrom said. “In fourth grade curriculum, students study the history of their state. It is wonderful that they study our Native Americans. The benefit of a potlatch is that the people are alive [and bring their traditions with them] today. If you just read about history, you don’t get a chance to meet these wonderful people. We hope that by understanding other cultures, our students come away with a way to look at different people with understanding and without judgment.”

Students were asked to escort the elders and served them during meals. In return, they learned to carve, play flutes, make drums, and play traditional games.

It was clear, while the students talked immediately following the potlatch, that their enthusiasm ran high.

“Being with the elders and serving them was fun,” said Priscilla. “I found the potlatch special—it felt like I made lots of new friends when we waited in line for our food and played games. Our class was the last to get food because we were the hosts.”

Many of the students raved about the food prepared by Chef Christyn Johnson, who prepares healthy meals, often locally sourced, for the Whidbey Institute.

“I very much liked the food,” said Sterling. “I also liked carving…everything. I met a new friend.”

Susan Jones, whose fourth grade hosted the potlatch, has taught at other Waldorf schools in the Bay area and said she originally came to Whidbey Island to retire, but was asked to take this year’s class.

“I hadn’t heard of potlatch and did not know what to expect,” Jones, a veteran teacher, said. “I was able to experience the reverence, beauty and sincerity of the elders who brought a depth of spirit. Sharing their spiritual path…this was a once in a lifetime experience. I think we all came away better.”

Norma Fickel, whose daughter Amber is in Susan Jones’ fourth grade, volunteered at the event and said she was impressed by what Waldorf education can bring to families. “This beautiful way of teaching helps children grow. The elders gave wisdom through their stories.”

Meanwhile, the Whidbey Island Waldorf School is hosting two Summer Camps; the first is from June 20 to 24 and the second from June 27 to July 1. The deadline for registering is this Friday, June 10. Geared for students from age seven to 13, students will learn outdoor education skills, environmental awareness, writing and dance. To register for the camp, contact Robin Jacobs at 360-341-5686.

WIWS student drums made at Potlatch  (photo by Kate Poss)

Europeans used the word potlatch to refer to the Nootkan word p’alshit’ which means “to give.” Northwest coastal tribes hold potlatches each year to share their wealth, feast, dance and tell stories. Coastal tribes include Haida, Nuxalk, Tlingit, Tsimshian, Nuu-chah-nulth (Nootka), Kwakwaka’wakw (Kwakiutl), and Coast Salish. Their region extends from the coast of Alaska to British Columbia and Washington.

For more information on potlatches, go to nativeamericannetroots.net/diary/631.

Kate Poss worked as a library assistant at the Langley Library and recently retired from that post. She was thrilled to work for three summers as a chef aboard a small Alaskan tour boat from 2008 to 2010 and continues working now as a personal chef. She was a newspaper reporter in Los Angeles for many years before moving to Whidbey Island where she likes ‘talking story,’ hiking, hosting salons and writing her novel.