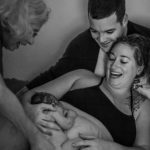 This is her gift — putting newborns into parents’ hands — and then bringing them into her own life. As a midwife, Cynthia Jaffe has delivered more than 1,200 children on the island, in a career that continues, even after 26 years. The petite, dynamic midwife sails into a room with enough energy to rival a toddler, of which she sees plenty. In larger cities, she explains, you may never see a child after it’s delivered. Living on Whidbey keeps her involved in many lives, a benefit she embraces.

“This is a small community, and I get to see those babies grow up and follow them throughout their lives,” she says. “Now, I’m starting to see the second generation have their children.”

Jaffe cares for all aspects of a laboring woman, including physical and emotional. (Photo by Kline Photography)

When Jaffe had her two children in Jerusalem, she used a midwife, which was common. She was intrigued by the whole process, and when her midwife told her of an opportunity to assist another midwife, Jaffe quickly signed on. She spent a year assisting, then came to Seattle to take her prerequisites. She went directly to midwifery school, where she delivered numerous babies during her three-year training.

At the time, there was another midwife who lived in Everett and came over to assist women on the island. Jaffe and her family made their home in Greenbank while she trained in Seattle. She applied for and received a grant from the Arise Charitable Trust of South Whidbey, and then built the Greenbank Women’s Clinic and Birth Center in 1992. Now, according to Jaffe, half of the babies she delivers are born at home, and the other half are born in the center. More providers have joined the staff, which includes another midwife and a physician.

Within the first week after their birth, Jaffe sees babies three times to make sure all is well.(Photo by Kline Photography)

“Women are making a choice,” says Jaffe. “This is just one of their options in the decision-making process.” Women choose to use a midwife for a variety of reasons, which include being comfortable at home, wanting the whole family involved, and occasionally, finances. Her job is to educate and reassure them during the process, making sure they’re comfortable wherever they are. But she offers more than just her skills and experience.

“She’s the calm to my storm,” says Rebecca Starkweather, who has five daughters. Even though Starkweather says her births have been quick and easy, it’s still nice to have Jaffe close. Calling herself an old-fashioned Whidbey girl, Starkweather has delivered three of her five daughters with Jaffe. “She walks me through it gently and lets me be me,” she says, highly recommending Jaffe, both as a midwife and a friend.

“Everyone I know who decides to have their babies at home comes to her,” says Starkweather. Her latest arrival, Raven, is at the center for a follow-up, and Jaffe spends plenty of time with her and her sisters. Jaffe visits babies at home after the first 24 hours, after 72 hours, and then again on day five. “We make sure that everything is going well and that both mom and baby are comfortable,” she says. Those visits might continue while children are growing.

Approximately half of the births Jaffe attends take place at home. This one is an example. (Photo by Kline Photography)

Jaffe and the other providers at the center have discussed creating a group environment for the women, no matter where they are in their pregnancy, with each group offering support for the next. She has been considering retirement but concedes that it’s difficult to leave a career she loves. She sees herself working with Doctors without Borders or in some other international group at some point. But spending time with family comes first, something she hasn’t always had time for, given the unpredictable nature of what she does.

Just last weekend, she delivered two more babies into the hands of parents — and right into her own heart.

Deb Crager is originally from the Midwest but has lived on the island for 26 years. She wrote the book “101 Things to Do on Whidbey Island: For a Day, a Weekend, or a Lifetime” available on iPad and Kindle Fire, with older copies in print from Amazon and ebay.