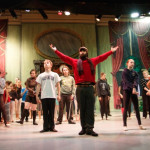 If you think Whidbey Island Dance Theater’s (WIDT) “The Nutcracker” is just another cheesy, small-town production of an overdone holiday classic, you are mistaken. The only cheese to be found in this production is in the Battle Scene of Act One, when two toy soldiers wield a large block of it. The soldiers, who have come to life to defend the young protagonist, Clara, from the wicked Rat King and its minions, successfully entice two of the pesky (albeit adorable) knee-knocking and tail-swinging baby mice onto the electric-car-sized mousetrap. Snap goes the trap, and off they go as the battle continues.

Grace Colby as The Rat King   (photo by David Welton)

“It’s the best of both worlds,” explained Co-Assistant Artistic Director Britany Falso. “You get to see super cute little kids, and you get to see professional dancing.”

Falso, following her studies at Cornish College of the Arts, now dances professionally with DASS Dance in Seattle. Although this is her first year as assistant artistic director, she has years of experience with WIDT’s ‘The Nutcracker’ and has danced almost every role. Like many young dancers who begin to dance soon after they begin to walk, Falso began dancing at the age of three at Island Dance and Gymnastics and eventually spent eight years as a member of WIDT’s pre-professional dance company.

What keeps professional dancers and choreographers like Falso coming back? “I don’t know what it is exactly. There’s something magical,” said Falso. “I can’t help but want to be involved. It’s my community. I just love it.”

“The Nutcracker” inspires loyalty amongst the entire cast and crew. There are 76 cast members this year. Some have performed for as many as 20 years. Even the young dancers have danced consecutively for three, five, eight or ten years.

Charlene Brown, founder of WIDT and Island Dance, is a large part of that magic, and one of the reasons dancers return. Although Brown engenders love and loyalty amongst her dancers and the community, she is quick to point to the large cast of WIDT board members, dancers, artists, parents and children who create the magic year after year. “Without their dedication and sacrifice to commit to our show, there wouldn’t be one,” Brown said. It’s her 23rd year producing “The Nutcracker.”

“You’ve got to get your kicks up,” yelled Brown at the first onstage rehearsal for the 2015 production of the holiday classic. On this particular Saturday, there was no heat in the high school auditorium, and dancers were bundled. It was also cold and flu season, and many of the dancers were battling colds. Nonetheless, they pirouetted, chasséd and jetéd across the stage. They were there to rehearse, even if they couldn’t breathe.

Foot attire in an unheated auditorium   (photo by David Welton)

During rehearsals, the much-loved Brown watched every move and coached dancers, young and old. The youngest dancer is five years old, the oldest over 70. WIDT company dancers are middle- and high-school age.

“Don’t itch or twitch!” Brown reminded the “itty-bittys,” as she affectionately calls the youngest dancers. Rehearsals are long—for some, as long as seven hours—and require extreme focus, athleticism, endurance and grace.

What makes WIDT’s version of “The Nutcracker” special is what Falso calls “our twist on the story. It’s more Whidbey Island-esque. Ours is more of an enchanted forest, with dragonflies, bees, butterflies, swallowtails and forest creatures. We have traditional elements, but there is always something new and different.”

This year, there’s a new Godfather Drosselmeyer as Ethan Berkley takes on the iconic role for the first time. When asked how his Drosselmeyer will differ from Lars Larson’s much loved Drosselmeyer, a role Larson played for six years, Berkley thought for a moment, laughed and replied, “I have a beard.”

“Do you know the series “Doctor Who”? I feel like I am stepping in as the new Doctor,” explained Berkley, who comes from a theater background. Berkley is used to spoken lines and cues. He admits that he sometimes makes up lyrics and sings along in his head. As a ballet, “The Nutcracker” traditionally contains no dialogue.

When asked about other new aspects this year, Brown said she is excited to unveil the snow castle that artist and parent-volunteer Val Haggenes designed, built and painted. “Parents like Val—and there are many—keep our show moving forward,” said Brown.

This year, WIDT has teamed up with Good Cheer and South Whidbey and Coupeville School Districts in an effort to provide more than 500 free tickets to children and families who would otherwise not be able to attend the show.  To give a gift of “The Nutcracker,” visit the WIDT website.

Lisa Kois, co-founder of the arts and nature based Calyx School, once doubted that the WIDT version of “The Nutcracker” was as good as friends and family said. She was mistaken. For more information about The Calyx School, visit: calyxcommunityartsschool.wordpress.com.