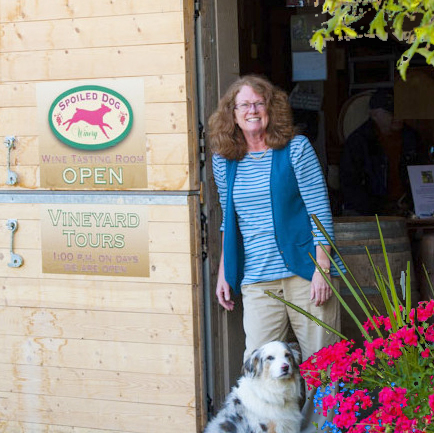 As little as nine years ago some people on Whidbey were opposed to farming on the island, according to Karen Krug, owner of Spoiled Dog Winery. “There were some negative attitudes,” she said, “from people who didn’t understand farming as a good use of the land.”

Krug was looking for creative ways to inform people about what farmers do and how they are being good stewards of the land. “A great many people had no connection with the farmers,” she said, “even people who lived next door to a farm.” Her solution was to organize a committee to educate the public.

Thus was the first Whidbey Island Farm Tour created in 2006, through the joint efforts of the newly formed committee and the Whidbey Island Conservation District, a group that was chaired by Krug. The concept from the beginning was that the tour would be free, so that it would appeal to families.

Initially, Spoiled Dog Winery was the major financial supporter of the event with the Conservation District and WSU Extension as contributors in-kind. In ensuing years, however, additional sponsorships and grants have been obtained from the Port of South Whidbey, the Lodging Tax Advisory Committee, Coupeville Port, Whidbey News Group and many area businesses listed on the farm tour website.

In addition to the pinot noir grapes they grow for some of their wines, the 25-acre Spoiled Dog farm is home to llamas, cows, horses and chickens. Krug noted that most of the people who visited before the tours began were unaware it was a traditional farm that includes the vineyards. Visitors usually meet Blue or Sami and quickly understand the name for the farm and the winery.

Sami sleeping, with the cows in the pasture behind (photo by Karen Krug)

Coupeville artist Stacey Neumiller was brought in to create the brochure and advertising for the first tour. She came up with the idea of having an artistic mascot for each of the years. “I had done a painting of a cow with Whidbey Island on it prior to the first Farm Tour,” Neumiller said. After the first year, I showed a print of the cow to Karen and suggested the idea of using the paintings as mascots. She agreed and the rest is history.”

Schlomann said he appreciates that the tour is a cooperative effort. “The committee provides help, enrolls sponsors for the tour, coordinates the event with the participating farmers and distributes promotional materials.

“Residents of the island need to recognize the importance of farms to our local economy on several levels,” he added, “including agri-tourism, traditional farm stands and commercial produce served in many of the local restaurants.”

He also admitted he gets great pleasure showing visitors how to bump noses and make friends with an alpaca.

With the growing popularity of the “Buy local” movement on Whidbey, there is also an increasing awareness of the value and quality of locally grown and raised products that are available here at the farmers’ markets and in the local grocery stores.

This year’s Farm Tour includes 14 participants, whose farms vary widely in appearance and in the types of produce being raised; the map of the tour participants also lists the eight farmers’ markets that run the length of the island.

So if you don’t know about the variety of produce (vegetables, berries, lavender, grapes, flowers and trees) livestock (cows, sheep, goats, chickens, turkeys, alpacas, llamas and horses) water produce (mussels) and fiber that comes from Whidbey Island, the Farm Tour this weekend invites you to learn and be dazzled.

Image at top: Karen Krug at the door to Spoiled Dog Winery (photo by Richard Duval)